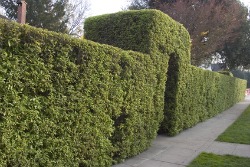 Why should it be so complicated to live peacefully with neighbours? Territorial instinct may play a part, but some people are more sensitive than others to any annexation of their territory and have zero tolerance to any disagreement, however minor.

The source of the quarrel can be noise, disrespect of boundaries or indiscreet windows. Sometimes, only a bush or a small tree planted too close to the border justifies the beginning of hostilities.

So to prevent trees and shrubs from being coldly (yet legally) executed by a furious neighbour, it is important to plant them according to the legal distances. The Civil Code states that there must be a minimum of 2m between the boundary and a tree that is more than 2m tall. The minimum distance for all other plants is 50cm.

This rule only applies if no other rules or uses apply to the region or district. Your town hall will be able to provide details of local laws and customs such as that which exists in Paris where planting on the property limit is actually allowed.

If the trees are not planted according to the stated rules, they can be ripped out of the ground on order from the judge. That is, unless their existence has not been questioned for 30 years. But once they naturally die, they cannot be replaced.

This general rule also applies to fences and walls. The physical separation standing on the boundary is considered joint property – belonging to both owners of the neighbour properties. This is what French law calls mitoyenneté, except if a title deed states the contrary.

There is also an exception in the case of a wall built with a slope on one side, which is presumed to belong to the owner of the property where the slope is located.

Both owners of the common wall are responsible for its repair and rebuilding, but one owner can always decide to abandon the co-ownership of the wall and leave the full ownership of the wall to his neighbour. The total lack of participation in the upkeep of the wall can be seen by a French court as abandoning all claim to part ownership.

In general, a neighbour can always buy the co-ownership of a separating wall, paying for half of the piece of land and half of the works. Of course, if someone decides to build a wall, he cannot do it on his neighbour’s land without his permission!

As for the height of the wall, rules and uses vary from one region to another. The best advice is to contact the mairie for clarification of local customs.

Often, the building of a wall or the planting of a hedge on a boundary is carried out in an effort to preserve one’s intimacy. However, these efforts can be ruined if your neighbour then knocks a new window into a first floor wall overlooking your swimming pool! 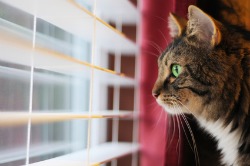 Creating a new window or enlarging an existing one to gain more light gives mostly very pleasant results for the owner of the property, but it can be most unpleasant for neighbours thus deprived of their intimacy.

Even when you have a totally normal, friendly relationship with your neighbour, this does not mean that he will appreciate you having a direct view into the living room or over the swimming pool. Just imagine what feelings can be roused when the neighbours do not get on!

A precise legal framework exists in the Civil Code to deal with preventing a neighbour from knocking out new windows in their property that overlook the property next door.

The Main Rules Are:

Neither a direct view (meaning a window overlooking the next door property) nor a balcony can be built if the distance between the wall that would have the window built into it (or the exterior line of the balcony) and the boundary is less than 1.90m.
For side views (windows or balconies) from which you have to turn your head to see the neighbour’s property, the rule is different and the distance is only 60cm.

A roof window is not considered as a view as you need to climb on to a chair to look out and this can be a risky business in itself.

If these distances are not respected, the blocking of the window or the destruction of the balcony can be decided by the court.

If when buying a property in France, you notice windows and balconies that do not seem to respect these distances, it may well be that the offending window or balcony has been in situ for 30 years and its existence can no longer be contested.

If you are planning to renovate or build a property in France, do make sure that your architect or builder is fully aware of these rules, as any mistake could be expensive.
With thanks to Bright Avocats