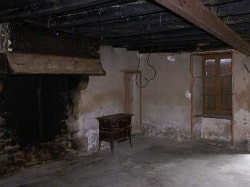 ‘I couldn’t bear to leave our our holiday home’

They say you know whether you want to buy a house within the first 30 seconds of seeing it. In our case, it took less than 10! Our approach to buying in France had been, we thought, very sensible. We knew that we loved the South Vendée and Deux Sèvres area for the peaceful countryside and warm weather. So, with a clear idea of what we were looking for: a low maintenance holiday home with a bit of outside space, perhaps needing a little redecoration, we set out to find our dream home…

The fact that the property we did buy was actually two C18 farmhouses, one habitable, the other unoccupied for more than a decade and in a sorry state, surrounded by a large garden complete with fruit trees and barn, can only be down to what is known over here as a coup de coeur. 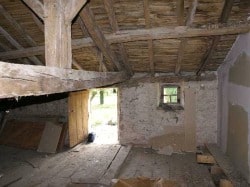 Work on the habitable house began immediately and we soon got used to spending all our holidays painting, hacking back the jungle in the orchard and tiling walls. With each visit however, it became harder to close up the shutters and leave. We used to joke that Andy had to prise my arms from around my favourite pear tree to get me into the car for the homeward journey and before long, we had decided that our holiday home needed to become our permanent residence.

This is when the real work began. If we were to live in our French house all year round, we clearly had to attend to the derelict space next door. This is where the network of contacts that we had been making in the local area really came into its own. With the help of friends, we found a fantastic builder who would do the structural work, leaving us to do the finishing off. Through his contacts, a plumber, joiner and electrician were brought on board and we learned builders’ French at an astonishing pace. 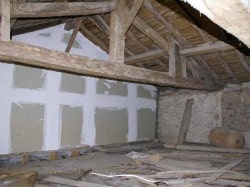 It wasn’t easy managing the work from England and we had a number of surprises when we visited. On one occasion, we arrived to find that the shower the plumber had installed in the new downstairs bathroom had been raised so high that anyone taller than a hobbit would have banged their head on the sloping ceiling (an error that was quickly put right when the builder had a sharp word with him on the phone – not sure what the French for ‘muppet’ is, but I got the gist!). Another time saw our stocks of rosé wine diminished by several bottles; a state of affairs that was quickly explained when the builder informed us that he had given them to our electrician who – unusually for a Frenchman – didn’t drink coffee!

As the work began, we realised just how much was actually involved. An old well pump, crumbling floorboards, ancient wooden partition and old toilet in part of what is now the lounge were ripped out before any reconstruction could begin. The first time the vast empty space in the second house was revealed was a real turning point in the project. 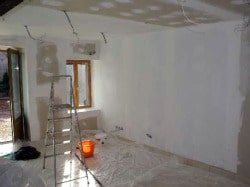 Full of enthusiasm, we did what I’d never advise anyone to do without the help of an architect – we had ideas! The double height original Charentaise fireplace would be sandblasted and become a feature if we created a mezzanine for our study. The stone walls on either side of the fireplace could be exposed and re-pointed, while a velux in the roof would bring light flooding into the lounge. Given all of our plans, we were so lucky that our builder had the integrity, skills and experience to help us translate these into a manageable reality.

Work over the next two years progressed sometimes frustratingly slowly, at other times surprisingly quickly and finally, structural work complete, it was over to us. New Year’s Day was spent not with a hangover but up on the scaffolding as we painstakingly sanded and painted the vast expanses of walls and ceilings in our double height room. The re-installed shower was tiled and grouted as we awaited the momentous day when the staircase would be fitted. This in itself was a real event – two joiners arrived early, armed with massive toolboxes to assemble what looked like a giant wooden jigsaw. 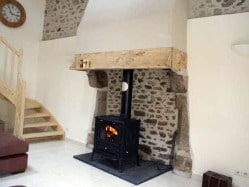 As the sacrosanct French lunch hour approached, we could still hear them talking as they moved around and wondered when they’d leave for the local restaurant. Finally, unable to stand the suspense any longer, I stuck my head through the door and asked if they wanted a coffee. The sight that met my eyes isn’t something you’d ever see in England. A makeshift table laden with bread, cheese, pâté, fruit and the inevitable bottle of vin rouge had been set up. They had even brought napkins and a picnic basket! I only wish I’d had the presence of mind to take a photo. That said, the quality of their workmanship was outstanding and I’ve since recommended them to several people who have been as pleased as we are with their work.

Our removal to France now a distant memory, we feel totally connected to this aged house that shelters us. We still find that we often stop what we’re doing to look proudly around at the results of all the hard work that has gone into our French home and smile. We have absolutely no doubt that making the decision to live here permanently is the best thing we’ve ever done.

Now, with work on the inside complete, we turn our attention to the vast task of removing all the aged and crumbling crepi from the external walls and re-pointing the lot. No matter how long it takes to complete, this is one job that we’re doing all by ourselves. As a former addict to buying shoes and handbags, I never thought I’d see the day when I’d get so excited about buying a cement mixer! I wonder if I can get one in pink?