The Entente Cordiale association, based in Dun-le-Palestel is open to all nationalities, its aim to help people of all nationalities integrate into French society by organising activities,projects and social outings.

Entente Cordiale ‘Vivre Ensemble’ is an organisation created in March 2005 by Dominique Johnson and her father, Roger Feugère. Its aim is : sharing, exchange and integration between the inhabitants of the Limousin and the new arrivals from abroad.

Since the beginning, the interest in the association has manifested itself with a number of articles published in the national press, radio interviews and of course, the number of members that attend the events organised each month.

The association also offers an information service for all those who have problems with the Franch administrative system as well as acting as an intermediary with other exsiting associations.

Today, Entente Cordiale ‘Vivre Ensemble’ has a little over 100 members.

For more information on the association and an up to date list of their activities you can also visit their website www.ententecordiale-creuse.org

The Anglophone Library has been set up in Dun-le-Palestel. The library which is based in the gardens of the “parc Bord”. It has been set up to lend English language books to Entente Cordiale members and those of any age or nationality who are learning the English language (of this group many might be French youngsters who are learning English and members will help with basic conversation.

It does seem like an eternity ago when at a meeting of Entente Cordiale I said, I would love to open a library ….. but you know what?, this Association has empowered me and I have done just that and with a lot of help …. we have a lending library….more

The project that has received the most attention, though, is that of the Vineyard, with even Sky News sending a film crew out to investigate. 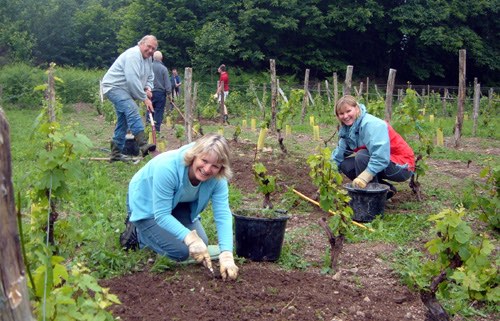 The Vineyard of Clos Brégeot

The 2500 square metre vineyard of Clos Brégeot is situated near the small town of Dun-le-Palestel. It’s now being renovated by a group of local people. The aim is to produce wine this year from the original 600 remaining Gamay and Pinot Noir vine stock planted 25 years ago. A further 200 new vines have been planted this year, but won’t come into production for 4-5 years.

Membership of this vineyard is more about being part of a traditional French craft than simply drinking the wine. It’s an opportunity to become involved with a lively group of enthusiasts who are dedicated to reviving a vineyard. One can’t underestimate the ecological importance of having a productive vineyard in this part of France. Although there is no need to actually do any work at the vineyard, all members are encouraged to take part. This is a ‘hands on’ opportunity not normally experienced and to actually see the produce of our labours is a reward in itself.

A 1980’s article about the planting of this vineyard stated: “A wine from the Creuse is so unusual that it needs to be protected and cherished”. This is just as true today.

During the middle ages there were vineyards on some sheltered slopes in the Limousin. But they were mainly abandoned during the 19th century because the climate was too harsh and they had no treatment for vine diseases. Finally, the arrival of the railway brought better quality wines from other regions of France.

In 1982 Summer visitors from Paris, Robert and Salange Salesse, challenged a Creusois organisation to cultivate a wine in our region. M. Salesse owned a south facing piece of land, well situated and protected from the north. One thousand Gamay and Pinot Noir vines were planted. Between 1982 and 1988 the vineyard yield increased from 120 to 1000 litres of wine. After 1988, the vineyard was progressively neglected, but during the 1990s was renovated by ‘Les Amis des Fleurs’, a Creusois association.

Around the year 2000 the vineyard was again abandoned and remained so until February 2007, when the owners of the land gave permission for the vineyard to be brought back to life by members of Entente Cordiale.

Working parties, labouring in all weathers, have hopefully salvaged at least half of the original planting. In all a total of 2500m2 of broom and brambles have been cut down and dragged away for burning, 200 wooden posts inspected and replaced where necessary, 3 km of wire re-stapled onto posts, 1km of aisles raked and weeded and finally 800 remaining vines have been cleared of moss and pruned.

A huge amount of helpful advice has come from M. Pinot, a local farmer who has been involved with the vineyard since its original creation.

The really hard physical work has now been done, but Entente Cordiale are always looking for more volunteers to participate at each stage of the project.

The vineyard will have its grand opening on June 30th at 6pm, with the Mayor of Dun le Palestel present to cut the ribbon. Please come along and see for yourself the vineyard. Drinks will be available and visitors are encouraged to bring a picnic.

Producing wine does have a lot of associated expenses, such as the replacement of dead or poorly producing vines, ongoing treatment against diseases and pests and the purchase of essential equipment. As a way of funding these costs the Entente Cordiale association has decided to create 100 ‘parrains’ each paying a one-off 30€ joining fee plus a 10 € annual subscription. This would cover all the capital and annual costs associated with the vineyard.

In return each member will receive:

· A certificate showing you are adopting a part of the vineyard, equivalent to say three vines (but not particular vines).
· A share of the production is based on your holding as a proportion of the total productive vines.
· This means for the first five years you will get 3/600ths of that year’s production.
· We will probably average 600 more or less productive vines.
· We aim is to produce one bottle per vine, but there are no guarantees. We are all at the mercy of nature – weather, pests, viruses etc. So parrains will participate in the risks as well as the benefits.
· Invitations to various events such as harvest, winemaking, as well as social events based on the vineyard.

For more information about the vineyard please contact
Charles Walker on 05 55 63 78 31 or e-mail [email protected] for details.

With thanks to Linda Bates: Editor of the Entente Cordiale Newsletter.
[email protected]