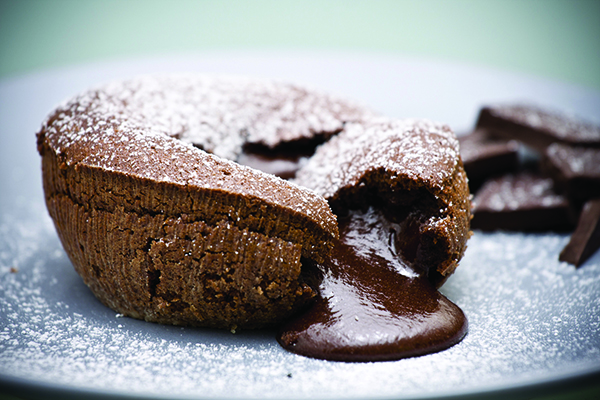 The ultimate guilty pleasure, even without the excuse of wintry weather, is a chocolate pudding. In France, whether your purposes are romantic seduction or pure self-indulgence, the legendary moelleux au chocolat is a show-stopper.

These melt-in-the-middle chocolate puddings deliver everything you could ask for. As your spoon makes its first delicate incision, the slight crunch of the crisp surface gives way to airy sponge, followed by an oozing centre of molten chocolate. Thanks to this perfect blend of textures and a bittersweet flavour balance, which affords richness without sickliness, this dessert barely requires the scoop of vanilla ice cream that it’s customarily served with.

Most recipes recommend using Belgian chocolate, and as with many French classics, the origins of the moelleux are disputed. New York chef Jean-Georges Vongerichten claimed to have accidentally invented it in 1987, when he prematurely took a sponge cake out of the oven. However, Michelin-starred chef Michel Bras had been concocting coulants au chocolat at his eponymous restaurant for at least six years by then. Either way, within a decade this sinful pud had risen to rival the likes of crème brûlée and îles flottantes, becoming a menu staple – one usually accompanied by the tantalising reminder that good things come to those who wait: ‘Please allow 15 minutes for preparation’.