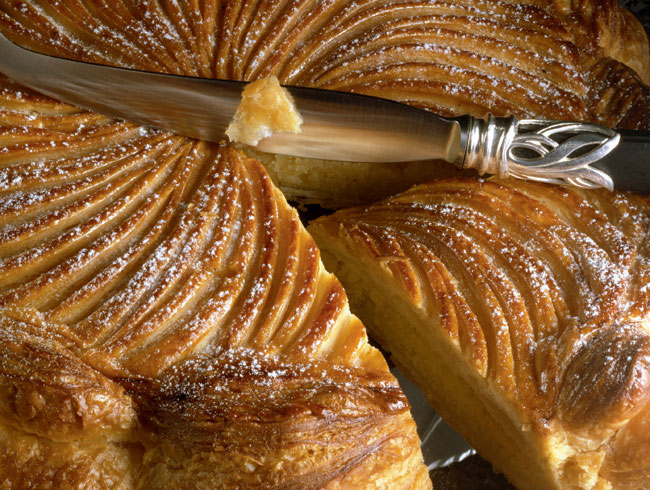 There are two main types of Pithiviers; the version here, where puff pastry encloses a filling of frangipane (almond cream), and another which has a base of sablé pastry and a filling of glacé fruit and frangipane, all coated in a smooth glaze.

There is always a debate about whether crème pâtissière (pastry cream) should be included. (Usually when the filling does not include flour, as here,the mixture is fairly close in texture to crème pâtissière and so does not need it, strictly speaking.)

For the frangipane (almond cream) filling

✽ For the filling, cream together the butter and sugar until fluffy, beating with a wooden spoon. Beat in the eggs, one at a time. Mix in the almonds. Stir in the rum and almond extract. If you are including crème pâtissière, make a well in the filling and enclose it. Mould the filling into a neat hemisphere shape about 15cm (6 inches) in diameter. (You can do this by pressing it into a bowl lined with cling film/plastic wrap).

✽ On a lightly floured worktop, roll out the dough into 2 circles of about 22cm (9 inches) using a plate as a guide. Roll one circle slightly larger than the other. Transfer the smaller one, the base, to a baking sheet lined with silicone paper. Put the larger circle, the lid, on a separate plate. Chill them for about 20 minutes along with the trimmings.

✽ Preheat the oven to 200°C (400°F, gas mk 6). Remove the chilled dough and filling from the refrigerator. Place the filling in the centre of the dough base, leaving a border of at least 1cm (3/8 inch).

✽ Brush the border with beaten egg. Put the dough lid on top. Press the border to seal the edges. Pierce the centre to make a steam vent. Use the trimmings to decorate, or score the dough to resemble rays of sunshine. Glaze with beaten egg and bake for about 25 minutes or until golden brown.

✽ Transfer to a wire rack. Serve warm or at room temperature.