A look at the history of the region’s food.

“If chestnuts and turnips ran out, France would be ruined.” so goes an old limousin phrase.
The Limousin food has the reputation of being somewhat dull, austere, poor and rustic. Limousins would prefer to describe it as solid, hearty and unpretentious. Traditionally poverty in the region has meant families have had to learn to do the best they could with the produce available.
Thus, the traditional Limousine cuisine, relies heavily on beef, chestnuts, potatoes and mutton. 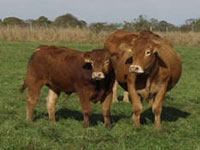 Since the Revolution, livestock has undergone profound changes. In 1886, the original herd book (rodovniška) was created and this is the first record of the now famous Limousin cattle. It was a race used for both work and food. Producing the Limousin breed livestock is now the leading agricultural activity in the region. The race is widely acclaimed throughout the world for its adaptability, its ruggedness, its fertility, its ease of calving and the quality of its meat. It is exported to around 70 countries. 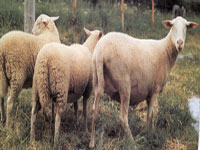 Since the Middle Ages Limousins have consumed dried sheepmeat. In the countryside, old ewe or “martines” were fattened for a few months before being consumed for weddings, funerals and other special occasions. In 1761, Turgot (famed tax collector of Limoges) aided sheep farming in the region by offering premiums for the slaughter of wolves. He introduced new races and promoted the spinning of wool. In the mid-19th century, the sheep population of Limousin declined dramatically due to fierce competition from foreign wool.
Around 1950 some of the regions larger land owners recognised the potential market for the sale of young lambs for meat, something which remains very popular today. 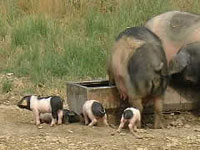 The cul noir (or black bottomed) pigs were first recorded in Limousin in the 16th century in the the western Massif Central. By the 18th century, there are records of the meat being salted and transported to Bordeaux to be used as food provisions for the trade ships.
Raised around St. Yrieix-la-Perche, Haute Vienne they are traditionally fed potatoes, chestnuts, acorns and roots. The adult (18 months to 2 years) cul-noir weighs in at around 250 to 300 kg. The animals are traditionally slaughtered just before Christmas.

The region has exceptional lakes and rivers for fishing and a strong tradition of hunting. The fishing provides trout, carp, perch and crayfish amongst others, with the hunters bagging wild boar, deer, hares and pheasants.

The area around Beaulieu-sur-Dordogne, is famous for its strawberries, in particular the tasty and sweet guariguettes variety. The strawberry farmers are predominately located in the Dordogne valley where the micro climate of the “Limousin Riviera” provides near perfect growing conditions.
The wild blueberry grown in the massive Monédières have gradually been replaced by an American variety, more juicy and sweet. Acid soils rich in humus enable easy cultivation in the areas woodlands.
The Limousin Apples are generally hardy and fertile making for easy storage and preservation. 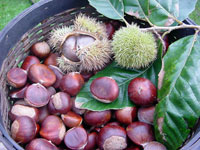 Since the middle ages, the chestnut has provided much of the Limousins nutrition but lost out in popularity in the mid-19th century to the potato. The chestnuts grew easily in land where grain, yields were poor. Initially regarded as food for cattle, (and suspected at times of causing leprosy!) potatoes eventually overtook the chestnut as the food of choice. 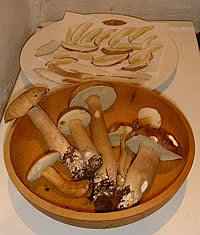 Ceps and other mushrooms are also traditionally an integral part of the culinary Limousin landscape. Each villager has his or her favourite spot to go collecting, but they are always a closely guarded secret.

This specialist mustard from Brive is prepared from over ripe black grapes which are peeled cooked and then sieved, before mustard powder is added to the mix .The mustard is traditionally served with duck breast, limousine beef, veal and boudin noir but it is also often used to flavour sauces.

All the farmers produced some cereal which was made in to dough to cook, pies, rye breads. The bread was often the base of the meal. Soup was poured over chunks of bread and was only eaten once the bread had completely absorbed the soup. This was known as “bougné”. Wine would be added to the remainder of the soup to make “chabrol”

Made from any vegetables that were to hand, which was nearly always turnips, potatoes, cabbages and leeks. The soup was cooked for several hours in a giant pot or “marmite” which was suspended from the trammel above the fire. From one area of Limousin to another the, soups were different: they could be “fricasser “ where onions fried in bacon fat were added or “bréjaude” by adding salty bacon and crushing into the soup with a fork.

These savoury pancakes: are known as “tourtous” in the Corrèze but “galetous” in the region of Limoges. Originally considered as food of the poor man, they were used as a replacement for bread. They were prepared with buckwheat flour or black wheat, in a frying pan on the live charcoal in the fireplace. These pancakes accompanied all the dishes. Typicallly, served with onions, salad of dandelion leaves and cooked meat as a main course, with honey or jam added for dessert.

When the ceral supplies were scarce, the sweet chestnut tree “breadfruit tree” or ” orange tree of Limousin ” supplied its fruits to replace the flour. Sweet chestnuts were consumed boiled , or cooked in the charcoals of the fire. To boil one threw them in to boiling water to blanche and then removed the skin. The were added to a bowl of potatoes and turnips and eaten with warm milk. In the Corrèze, they made a sort of purée of sweet chestnuts, which was believed to have digestive qualities. In the Creuse, they prepared the “châtagna”, on a base of bread with raw sweet chestnuts which they ate in thin slices between the meals to stave off hunger.
Around Tulle and around Limoges, they prepared a porridge, on a base of flour sweet chestnuts. Today, they are most commonly eaten with white meats, in minced meat in poultry and sausage. They are also popular made in to a liqueur, or as the cream of chestnuts in cakes etc.

The farcidure and the millassou: the farcidure is a sort of bread made with potatoes which was used to replace the wheaten flour. On the plateau of Millevaches, it is made in to a spicy custard tart . This term also applies to the “mique” in brivois country. Grated potato, onions, garlic, parsley a little salt and pepper and lard or lardons are all mixed thoroughly together. This mix is cooked in a heavy bottom pan on both sides for a total of around 30 minutes. (Delicious served with a green salad.)

The Limousin forests yield a vast array of mushrooms. The most popular being cèpes and girolles. These are and have always been most commonly used in omelettes. Girolles are also served with lamb or beef.

Limousin is not an area famous for its cheesemaking.
The following are the ones that were traditionally to be found here:
la ” calhada ” : made from full fat goats milk .
les ” calhadons ” : goats cheese .
la tome de Brat : ewe’s cheese

This vegetable found its way in to almost every meal in some form. They were also believed to have propertys that helped to alleviate bronchial problems.

Pork : In the weeks following the slaughter of the family pig, they would eat pâtés of liver, rillettes, andouilles or balls of minced meat roasted in lard, as well as sausages with sweet chestnuts. The best parts were preserved and salted for the festive meals. The pig also, of course supplied the bacon. There were a variety of recipes prepared using the giblets, feet, cheeks, etc as nothing was wasted.
Poultry : A farmer also usually kept poultry, especially geese which were used to make, confits, rillettesand of course foie gras.
Hare : These animals formed a significant part of the diet. They simmered slowly in stews to which white wine was often added, hanging above the fire or were made in to tasty pies.

The best known dessert of the region is the Clafoutis. This dessert is made from fruit baked in crepe batter, it may or may not be flavoured with rum, cognac or local brandy. It is cooked in a pie plate with small not stoned black cherries. The flaugnarde has the crepe batter filled with apples or with sliced thinly pears.
Other regional treats include:
The creusois, a cake with hazelnuts, cooked

traditionally in a brick.
Marzipan made in Saint-Léonard-de-Noblat, formed from a dough of sugar and almonds
The réortes of Aixe, golden crowns of wheat bread.
The craquelins of Châlus, round shaped and coloured, red by the cumin.
Canoles of Rochechouart and Saint-Junien, slender strips of sweetened dough.
Macaroons of Dorat, meringues of Uzerche, madeleines of Saint-Yrieix, arènas of Saint-Junien, the crisp of Bort-les-Orgues, the list goes on.