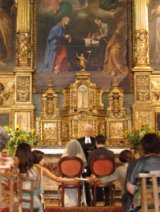 If you’ve gone through the legal requirement for a Civil Ceremony, either in France or in your home country, and want to have a religious ceremony afterwards then there are still a few more hurdles to go!

For any kind of religious ceremony the best advice is to get in touch with your home church, synagogue or mosque and see if they can offer you any immediate help in getting in touch with officiates in France.

Leave yourself as much time as possible to organise everything, administration of paperwork from country to country can take time and many French officiates want to be sure you are committed to the marriage before they perform the ceremony.

Make sure to take your Marriage Certificate with you on your wedding day as proof of the legally required civil ceremony so that the religious ceremony can take place!

France is a nominally Catholic country so there are plenty of wonderful churches to hold your wedding in. In order to arrange it though you first have to approach the priest of the church where you want to get married and convince him to officiate your ceremony. It helps to have a personal connection with the church or some special reason for wanting to get married there rather than your parish church.

Once the priest has agreed to perform your wedding ceremony you have to produce a number of documents to allow the process to continue.

Anglican
Unsurprisingly, there aren’t many Anglican Churches in France but if you have a connection with the local Chaplaincy then it is sometimes possible to arrange to have an Anglican ceremony in a Catholic church.
It’s a good idea to get in touch with the Chaplaincy in the region where you wish to get married, a list of dioceses and chaplaincies in France (and around Europe) can be found here.

Chaplaincies in areas such as the Midi-Pyrenees and Aude maintain good relations with their Catholic counterparts and hold services in various churches throughout the region. As is the case in many areas around France, you will need to give them as much notice as possible because there are only two priests covering the Midi-Pyrenees and Aude area which is the twice the size of Wales! There is a fee for their service since the Chaplaincy is self-funding and receives nothing from the Church of England.

You must book the church and get permission from the Catholic Priest to use it, but the Chaplaincies often have a standard letter to help you with this. Most French churches do not have organs but the Chaplaincy may be able to advise you on someone local who can bring along their own organ to play for you.

Jewish
France has the largest Jewish population in Europe with over 480,000 Jewish people, so there are a lot of beautiful synagogues all over France that may be able to hold the ceremony for your wedding. Many are difficult to contact online and most are only French speaking so it is often easier to arrange a ceremony when you have a personal connection with the synagogue or rabbi.
Normally you will need a letter of recommendation from your home rabbi saying that they know of no reason why you shouldn’t be married in France.

Islamic
Nearly 10% of the French population are Muslim but because it is normal for couples to be of good standing in the community before they have a wedding ceremony it is unusual for foreigners to get married in France. However if you have a strong personal connection with the mosque or local area you may be able arrange a ceremony. Since it is a decision each mosque makes for themselves it is worth contacting both the mosque where you want to have the ceremony and your home mosque to see if it may be a possibility.

Majestic Wine, Calais Prices, just a hop across the Channel!

Discover the perfect wines for your wedding, at prices unseen north of La Manche. Come to Majestic Wine Calais and save up to 50% on your favourite Majestic tipple.

We’ll even pay for your travel*!