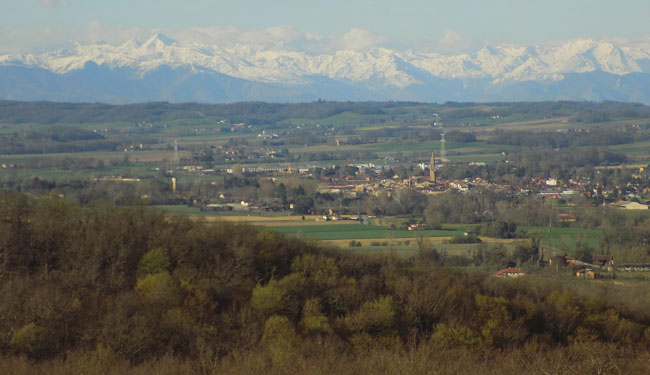 Pleasures of the Campagne

Dominic Bliss journeys to the south-western Gers département to meet an expat who revels in the area’s peace and calm, both on and off two wheels

Quiet? You haven’t experiened it until you’ve visited the village of Duffort in the south-western département of the Gers in the newly named Occitanie region. Actually, it’s more of a hamlet, as there are no shops, bars or restaurants in Duffort and it’s home to less than 140 souls. It’s sleepy, to say the  least, and that’s exactly how Peter Stephenson likes it.

An Anglo-Irishman, originally from Leeds but more recently Cork, Stephenson moved here in 2013. He now rents a small house in the village and,  since his Mother passed away, lives there alone.

“I love the gentle lifestyle of rural France,” says the 60-year-old, who’s a partner in a bicycle tourism business called Gascon Cycling Tours. “It’s just beautiful. You sit on the porch with a glass of wine in your hand. It’s so quiet. You hear the birds singing. And you relax.

“If you’re moving to rural France, you’ve got to realise what kind of place you’re moving to. In rural England, everyone goes down to the pub on Friday after work, or out for lunch on Sundays. But you don’t have that in France. It just doesn’t exist.”

“The way the French meet and interact through entertaining in their homes – I really fit into that,” he says, regarding his immersion into village life. 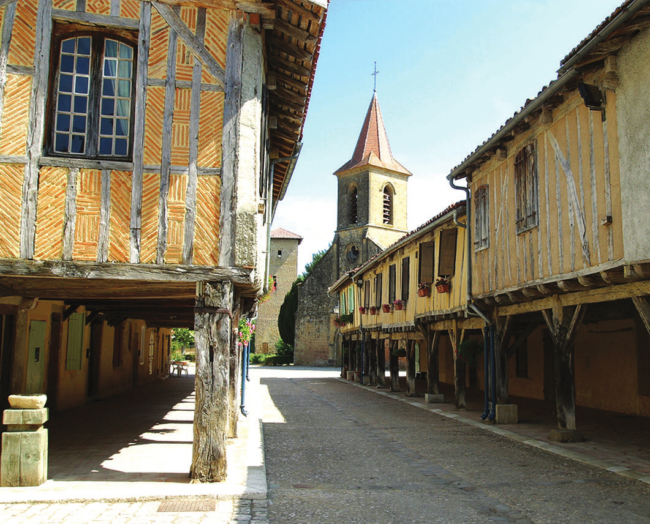 The 11th-century bastide village of Tillac

Peter stresses how crucial learning the language has been to his immersion in the daily life of Duffort.

“You’ve got to learn French,” he states. “There’s no way you can come and live in France, and join in the local life properly, without being able to speak French – not perfectly or fluently but enough to get by and to have a conversation with your neighbours.”

He did learn French at school but admits that he hadn’t spoken it for 30-odd years before moving to France in 2004.

“It was pretty awful when I came out,” Peter remembers, adding, “I certainly am not fluent yet, but I have enough to enjoy one-on-one conversations with people.”

Peter hasn’t taken any formal language courses since relocating, although he says that watching the news on TV and reading French newspapers has really helped. Despite this lack of fluency, Peter refused to shy away from embarrassing himself by attempting conversation.

“The French are like us: they won’t speak English to us because they don’t want to make a fool of themselves,” he reasons, “but as long as we’re prepared to make a fool of ourselves first, in French, then they’ll happily join in, if they can, in English. You get out of it what you put in.”

Now, after three years in Duffort, Peter counts many locals among his friends. His Mother spent the last three years of her life there, which proved his commitment to integration.

“They really respect the elderly,” he says. “At Christmas, locals used to bring flowers and chocolates round for my Mother. Quite a number of locals came to her funeral.”

Now, when Duffort stages a social event at the village’s salle de fêtes, Peter knows most of those who turn up.

Peter misses very little about Ireland and the UK, except perhaps the ability to converse completely fluently with his new Gallic friends, although he admits that “if I tried a bit harder I’m sure I could perfect my French”. The only other things he often hankers after are “proper whipped cream” and “beef that has been hung for at least 28 days”.

In any case, a handful of nearby airports allow Peter to return to the British Isles both quickly and cheaply. He has grown-up kids back in Cork and a girlfriend in the Cotswolds. 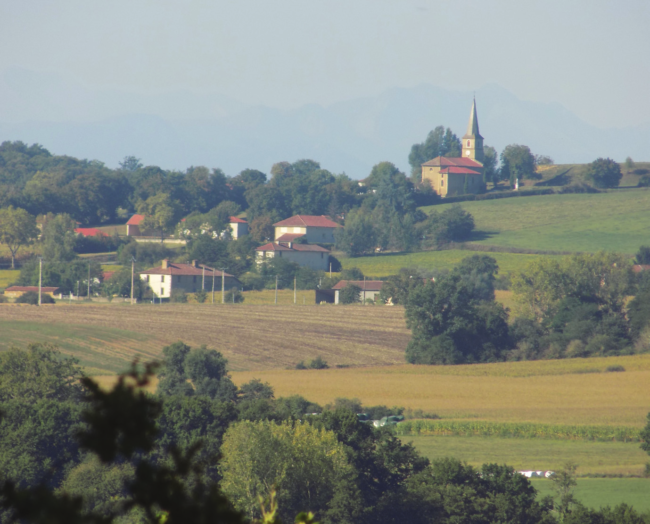 An idyllic view of Duffort

Meanwhile, there’s Gascon Cycling Tours to run. The company is based eight miles from Duffort, in another village called Miélan. There, along with his two business partners, Peter accommodates guests in three holiday gîtes created in an old barn building, caters for them and guides them around the local countryside on two wheels.

“We welcome everyone, from the complete novice to the experienced,” Peter states on the company’s website. “From those who just wish to meander through the gently undulating countryside to those who wish to retrace the exploits of Eddy Merckx, Miguel Indurain, Bradley Wiggins, Chris Froome, et al.” 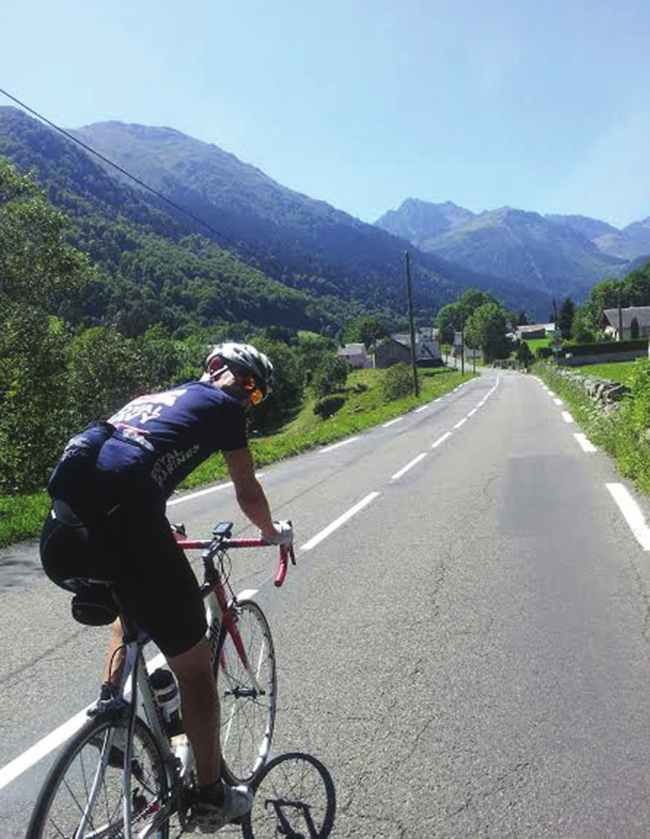 Cycling in the mountains

Business is good right now, a situation no doubt helped by the current cycling boom back in Britain. Peter says that he can take his cycling guests out on the back roads of the Gers and sometimes they’ll only encounter a handful of cars in an entire morning, which is another concrete benefit of living in such a quiet rural location.

“The roads are so quiet,” Peter confirms, wryly adding, “Other people might say it’s so quiet that it’s a graveyard, and that anybody with a pulse can’t live here, but for me it’s fantastic.” 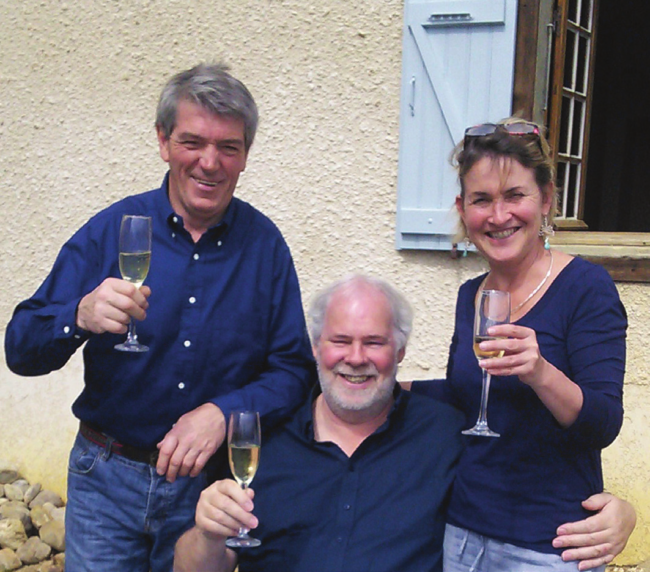 Peter (centre) and his partners in Gascon Cycling Tours

Previous Article In a Manner of Speaking
Next Article How To Drive on French Motorways (Autoroutes): Tolls, Service Stations, & Driving Tips