Market day in Foix, the heart of the Ariège 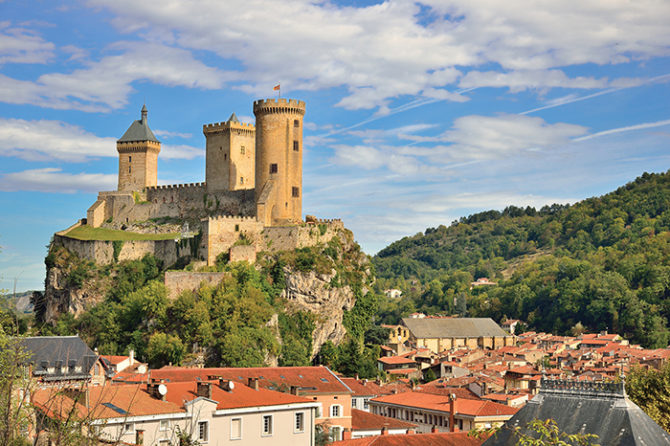 The medieval castle that overlooks Foix

Ulrike of the chocolatiers Bouga CacaO

Nuns from the Abbaye Notre-Dame du Pesquié at Villote market

The morning I arrive in the medieval market town of Foix, its major landmark has seemingly gone missing: the magnificent Château de Foix, which soars heavenwards over the  town’s red-tiled roofs and overlooks the Vallée de l’Ariège, is entirely eclipsed by thick fog. As an omnipresent emblem of the town, one which presides over its citizens day in-day out, I begin to realise that the castle’s temporary absence is being keenly felt.

The Château de Foix has overseen the story of the Ariège for centuries, and the discovery of cave paintings beneath the castle’s foundations suggest s that this spot has been inhabited for some 13,000 years. Its location is unique: built upon a huge rock  at the confluence of two major rivers, the castle overlooks a flat valley shielded by the Pyrénées,  which surround it on all sides.

The château itself has known several different periods of construction. Sitting on 7th-century foundations, its first square turret was built in the  11th and the second in the 12th, both out of the mont’s  own limestone. Numerous Counts of Foix called this majestic fortification home throughout the Middle Ages, until the 17th century, when it was transformed into a prison. A towering wall was erected to encircle the castle, behind which prisoners awaiting the death penalty carved their final thoughts into the turrets’ stone interiors. The site was declared a national monument in 1864 and its prison walls torn down to once more reveal the imposing medieval towers, albeit now bearing the scars of the inmates’ graffiti.

Today, the castle is feeling shy. Even my ever-cheerful chaperone, Mado Goncalves, feels its loss, insisting that this only happens a couple of times a year and stealing glances now and again at the cool white sky where rounded stone turrets should be.

In this town of around 10,000 inhabitants, it’s impossible to walk anywhere at Mado’s side  without bumping into her friends, colleagues and acquaintances – and each of them laments the missing castle as they do la bise.

‘Bio’ & fair trade
Putting thoughts of the château aside, we scurry down the misty Allée de Villote – a plane tree-lined, pedestrianised boulevard – to the 19th-century covered market at its end. La Halle de Villote duly reflects the industrialisation that pervaded its time – an embellished gazebo wrought of blue-grey iron,  it’s provided shelter for the Friday morning market stalls for 150 years.
This marché is one of the biggest and most important in the whole of the Ariège département, making it a major lifeline for many local farmers  and cultivators. A quick turn around its stalls reveals  a surprising diversity of vendors and wares, much  of which is distinctly unique to the area – from sugar-dusted Croustades du Couserans (local puff pastry tarts with apple, plum or pear fillings) to jars  of local pâtés. 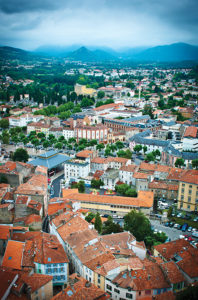 Two habited nuns catch my eye as they supervise a stall displaying homemade jams, cheeses, butter, honey and pain d’épices. They smilingly tell me that they are selling produce from their farm at the Abbaye Notre-Dame du Pesquié, where around 50 nuns have been living self-sufficiently for over two decades. They rarely leave their nunnery, which is hidden away in a nearby valley, so encountering them at the market offers a rare insight into their peaceful, secluded existence. It also provides an opportunity to support them in their latest endeavour. The sisters are building a church and Soeur Marie Madeleine was thrilled to inform me that they had just begun work on their first stained-glass window.

The next stall belongs to Ulrike Bougartz, a German chocolatier who sources her ingredients from families of cocoa growers in Ecuador. It’s transported directly to the Ariège in huge blocks, to be transformed into exotic creations, courtesy of the imaginations of Ulrike and her husband and business partner, Alex.

One variety of the couple’s chocolate is infused with thyme, red pepper and barberry thorns;  another aromatised with cinnamon, coriander and coffee beans; while others are bejewelled with dried figs, candied orange or violets, nuts or chilli flakes.  I nibble on a jet-black chunk of ‘100% hacienda’ chocolate, pleasantly surprised by the subtlety of its bittersweet smoothness and lingering aftertaste.

The success of their business, Bouga CacaO, isn’t solely down to the high quality of its chocolate. Foix has a culture of sourcing food naturally and ethically that’s as unpretentious as it is organic. I get the feeling that the Ariège has never strayed far from the basic, down-to-earth principles of simple, eco-friendly farming. Ulrike isn’t from Foix and yet she’s here to stay, in a community that’s aligned to her personal philosophy and supports her ever-growing enterprise.

Meandering over to the next stall, I’m greeted by a shoal of brown trout, weaving back and forth in their container. Gaspard, a youthful fisherman, has transported them to the market in the water of the river in which he caught them that morning, and  now they’re ready to be selected by a buyer, then gutted on the spot. The whole method is entirely organic, prevents any waste and provides the  freshest fish that anyone could hope to buy.

Local oranges on sale at the Place Saint-Volusien market

The Château de Foix in the sun

Medieval marketplace
After admiring Gaspard’s range of coral-coloured, home-smoked trout, we wind through the medieval streets of Foix’s ‘old town’ to its ancient central square, Place Saint-Volusien, where another market awaits. This is the rough-and-ready alternative to the more refined covered market, and most of its peddlers are locals selling fruit and vegetables grown in their own gardens. Old men in flat caps stand beside wooden crates filled with mud-encrusted potatoes, and a young baker, Jean-Marc, is carefully arranging loaves of wholemeal bread on his stand. In line with local demand for organic foods, Jean-Marc is resurrecting traditional methods of wheat cultivation and breadmaking using fire-heated brick ovens. The results, he promises, are far healthier, more delicious and vital to the preservation of artisan methods. 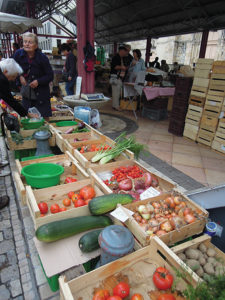 Exploring Place Saint-Volusien there’s one figure which stands out. Now at the ripe age of 77, Janine  has been selling her garden’s fruit and vegetables at this market for 50 years. Janine’s back is hunched – probably from decades spent tending to vegetable patches – her demeanour is brusque and she’s clearly the market’s head honcho. Taking exactly nul interest in my questions, Janine is there to get the job done, with no nonsense involved. Her produce may look a little worse-for-wear but Janine’s customers are loyal. When Mado buys a bunch of wildflowers from her,  it comes with a lively exchange of jokes and pleasantries that reminds me, once again, of the Ariège’s kind core, which is nurtured by its warm, down-to-earth populace.

It’s almost l’heure de déjeuner and we suddenly realise that the morning mist has lifted. Peering upwards, the sand-coloured turrets of the Château de Foix are finally visible in all their glory, glowing against a brightened blue sky. We scramble up the steep cobbled path leading to the castle doors to  find a magnificent view emerging before us, shimmering in brilliant sunlight between the clearing clouds. The sea of terracotta-tiled roofs below complements the verdant greenery that surrounds  the town and covers the Pyrénées in a mossy hue.

Normalcy returns to Foix in the blink of an eye. Bathed in fresh sunshine, this small commune continues its day contentedly, under the watchful  gaze of its ancient castle, enclosed within the protective arms of the mountains.