Elizabeth Whiteman lives in Bury, a small village in the Oise department, close to the town of Mouy, between Chantilly and Beauvais. She is a mother of three and a keen gardener, who also likes to paint her produce. 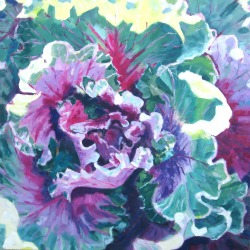 What first attracted you to life in France?
I came to France with a Frenchman I met in London.

What preparations did you make before you went out?
No preparations whatsoever. I had just come back to London after two years travelling around the world when I met my first husband. I didn’t have time to rebuild my life in London before moving to France. It was almost like a continuation of my travels.

Where do you live?
I recently moved into a beautiful stone house built in 1800, described as a maison bourgeoise, or maison de maître. It’s the third house of this style I have owned in France.

How did you go about finding your home?
It kind of fell into my lap. As I was divorcing and the family home had been sold, I needed to find something for me and my children. I had visited a few houses without really being sure of where I wanted to live. I have some friends in Mouy and thought I would have a look, particularly as it is cheaper than where I lived before. I saw this house for sale and the estate agent who sold the family home managed to secure this one for me. I knew it was right as soon as I walked in, even though it had been empty for around three years and had waist-high weeds right up to the back door. 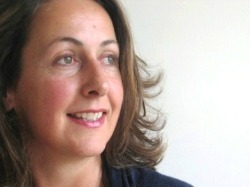 Most of the major elements had already been done – new boiler, roof, etc. There are a few things I am planning on doing, like remodelling the kitchen, removing a toilet in the kitchen (bizarrely), and finishing off the attic conversion. I was unable to start work on the house straight away, as I was couldn’t complete signature for the house for a few months. I was due to complete at the beginning of July, but the owner died suddenly one week before the signature. As it happened, the house had been empty,] and they had already given me the keys, so I was able to move in – with the prevision that I do no work on the house until the inheritance had gone through the courts. I finally signed at the end of November.

What is your favourite season in the vegetable garden and why?
Spring/early Summer when everything is bursting with life. I’m passionate about gardening, particularly heirloom vegetables, and in my new garden I am experimenting with old varieties of perennial vegetables. Although the size of my garden is modest – 800m2 – it is surrounded by a beautiful old stone wall. My plan is to create a compact edible forest garden.

Do you have any original recipes to share?
A lot of my cooking is intuitive and based on what vegetables I happen to have, but here’s one for dark greens, like kale or cabbage, that can sometimes be a bit bitter, or not very attractive to children. I fry off some chopped onion with garlic and ginger, then add chopped greens. I let it all sweat until softened, adding a little water in the pan it looks like it’s sticking. Once cooked, I add dressing of soy sauce, peanut butter and sweet chilli sauce (equal amount of each), and stir that through. 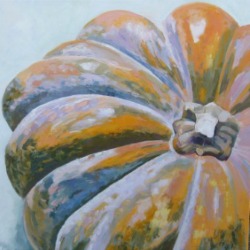 How have your benefited from the move? What do you like about the lifestyle?
Bury is a very quiet village and I have yet to get to know many people here. My immediate neighbours are very friendly and welcoming and I have some lovely south African friends in the village and English friends in the nearby town of Mouy. I like being able to walk out of my front door, straight into the countryside with my dog, although I do need to use the car a lot for the children.

Could you speak the language?
I first arrived in France in 1991 with only an ‘O’level in French. I now speak it fluently, but as I learned French as an adult, I will always have a hint of an accent. My children are bilingual from birth so speak both languages fluently with no accent whatsoever.

What are the differences between life France and life in the UK?
I struggled for many years with the rigidity of French society, particularly as an artist and over the education of children, but I have learned to accept it and find my way as best I can. Who knows what other difficulties I might have had in the UK, or elsewhere?

Do you go back to the UK regularly?
Not as often as I like. I have been back more often in the last couple of years visiting friends, and my eldest child who is at university in England. However, I don’t have a family base in the UK any more, so I do feel a bit of a squatter, but it’s always great to catch up with friends – quite a lot of them now are friends I met in France and have moved back.

What do you miss?
The ease of contact between strangers. To be able to walk into a shop and be greeted with a smile and helpfulness. To stand in a queue and start chatting to a stranger. Good home cooked and affordable food in pubs, cafés or coffee shops for a light lunch when out shopping or visiting. Something about the gentleness of Britain and the British.

When I separated from my childrens’ father, the judge made the decision that my children’s lives be split equally between him and me. When they are with me, my day revolves around their school times and their activities, which vary. On those weeks I’ll get my errands and shopping done. On the week when I am alone, I don’t have a very strict routine. The week will usually entail gardening in fair weather and painting and blogging in bad weather. I paint two days a week with local artist friends, Rochelle and Jenny, also expats, as we are preparing for an exhibition in March in Senlis. We are also collaborating with another expat who is setting up an art printing business.