First published: 22nd May 2018 by FrenchEntrée 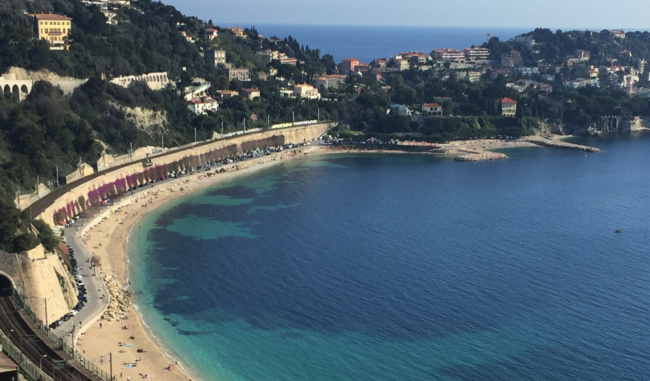 Nearly 30 years since she left her native United States for the sun-dappled shores of the Riviera, Lanie Goodman tells us why it’s the best decision she’s ever made

Why did you choose to call Villefranche-sur-Mer home?

The advantages are obvious: small-town tranquillity, an unhurried pace and the sheer beauty of my daily vistas. My apartment has a large terrace with dramatic, sweeping views of the coast and sea; which I can also see from my desk. I’m constantly distracted by the changing light and colours. I look out at Beaulieu-sur-Mer, which is actually closer to my home and one of the smallest villages in France. I love the sleepy old-world charm, the Belle Époque villas and hotels, the small seafront turn-of-the-century-style casino, and flaming bougainvillea everywhere you look.

What aspects of Riviera life do you enjoy most?

I love the fact that I can walk to a number of different beaches and wild creeks (where people still fish for octopus and pry off sea urchins from the rocks), or rustle up an impromptu picnic from the outdoor market, then hike around the Cap Ferrat. There’s a terrific little jazz festival on the Cap Ferrat, held in both summer and winter, that features international artists. The privilege of sitting only metres away from the stage in this kind of intimate seaside setting is so rare these days.

I love the yellow-orange courgette blossoms that are plucked off and used to make fritters, known as beignets de fleurs de courgettes. They’re deep-fried and sinfully addictive, but taste incredibly delicate.

My apartment is located in a historic estate that was formerly the home of Lord Salisbury, Prime Minister to Queen Victoria. The main house is a three-storey mansion and I live in the little annex next door. It may have been the guest house or the servants’ quarters. Salisbury was quite a devoted  gardener and the surrounding landscaped park is filled with a huge variety of Mediterranean plants, plus olive trees, palm and citrus trees.

The banter is always good-natured, and if you have a problem of some kind, people are generally very friendly and helpful. The locals are accustomed to a summer onslaught of foreigners and make an effort to converse, even in broken English.

How was your French when you arrived? And how about now?

Before moving to the south of France 28 years ago, I was a professor of French Literature and translator of French fiction, so you might say I was already well-versed in the subtleties of the language. But French slang is always changing and I try to keep up with current expressions by watching lots of French films. I’m also a shameless eavesdropper in public places and always carry a notebook.

Lunchtime is still sacred here, especially on sunny days. If a small boutique is supposed to re-open at 2pm, don’t be surprised if the shop owner turns up 20 minutes late. As for the landscape, I still marvel at the vivacity of the winter colours: the snowy almond blossoms in January and bright yellow mimosa in February, all over the hillsides.

What is your favourite French phrase?

There are so many idiomatic gems tied up with food. One that I actually use is, “Il en fait tout un fromage”. This literally means, “He’s making a cheese about it”. In other words, “He’s making a big fuss for nothing”. Then there’s, “Il fait un flan”– “He’s making a flan”. But it has nothing to do with preparing a dessert! It has roughly the same meaning: to react in an exaggerated way, and make a big deal for no reason.

Lanie Goodman is an American arts and travel writer and the author of Romantic French Homes. She has been living in southern France since 1988.