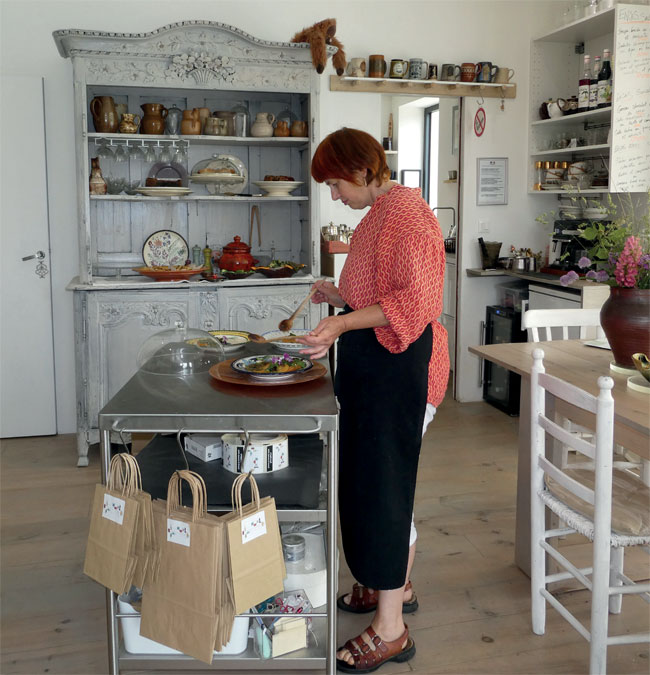 It took just one visit to Pas-de-Calais for Katharine Tasker to fall in love with this charming corner of France. Two years later, she’d swapped London’s traffic jams for gâteaux, tartes and wide open spaces. Janine Marsh finds out how she did it…

Pas-de-Calais is a sparsely populated département peppered with tiny communes, hamlets and villages. Gouy-Saint-André is one such, deep in the rural heart of the Seven Valleys, a place of meadows and wheat fields, forests and streams; tranquil and verdant. Go there now, however, and you’ll find a touch of London style brought to this part of rural France: l’encas et l’échoppe – snack and shop – the new business venture of British expat Katharine Tasker.

It all began in 2015, when Judy Gifford, a British expat artisan jam-maker at Tea Together, in Le Touquet, personally delivered a consignment of jam to Katharine’s shop in London. The women got on well; both had a background in film-making and, at the end of their meeting, Judy invited Katharine to visit her at her home in Saint-Rémy-au-Bois. A while later, Katharine had to attend sales meetings in Paris and Lille, and decided to add on a couple of days to visit Judy and her husband, Nick, who lived in a restored farmhouse with their Jack Russells and horses.

As well as their jam-making enterprise in Le Touquet, they also ran Le Tea Room from their home, serving scones with home-made jam and clotted cream to smitten locals.

“It was love at first sight when I saw how glorious the countryside is here,” recalls Katharine. “It’s not a dramatic place but it’s so tranquil and varied; the lush valleys, forests and wide-open plateaux, the massive sky views… It is just so beautiful. I thought it would be wonderful to have a bolthole here.”

Katharine returned to London, and when, shortly afterwards, the lease on her shop needed renewing, she sought alternative premises close by. “It was really difficult to find something suitable, and when I did it was horribly expensive,” she says. She was still in touch with Judy who, in the midst of Katharine’s frustrating search in London, told her a plot of land had come up for sale in Gouy-Saint-André, right near Saint-Rémy. “Judy told me this particular plot was special and that I ought to come and see it,” Katharine adds. “She understood my taste and was convinced I would love it.” But when Judy told her the price, Katharine was disappointed. The land was well over her budget. 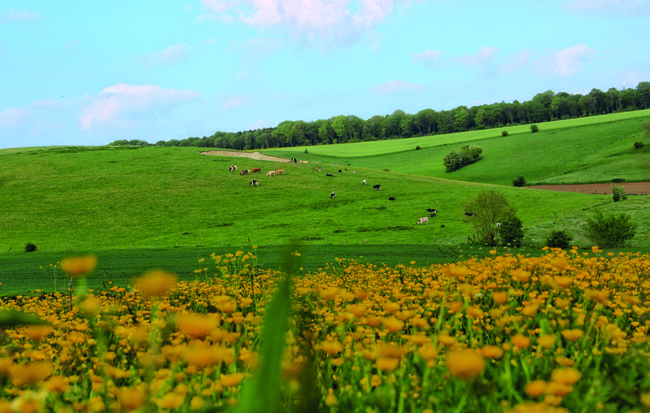 Judy urged Katharine to phone the seller to see if there was any wiggle room. He told her that there wasn’t, but that he did also have three cheaper plots for sale. Katharine agreed to go and look at them. They weren’t suitable, but after viewing the affordable land Katharine was persuaded by the seller to at least look at the more expensive plot.

“It was a wow moment,” she enthuses. “I felt a connection. I instantly thought, what if I open my business here instead of in London?”

A tree in the garden was her first inspiration. “It was old,” says Katharine. “I didn’t want to cut it down, so I thought we would design the house around it.” Her head buzzed with ideas, and London, with its expensive rental options, didn’t feature among them. Katharine already knew that what she wanted to do was to open a café and shop with a hint of London style in this bucolic corner of northern France. Within hours, a deal was struck.

Katharine now had a large, empty field on her hands (albeit one with gorgeous views) and very little money left to make something of it. But she wanted to create the home business of her dreams and employed an architect, a Greek living in London, to help her. Having spent time in France as a child, she found that she picked up the language easily and wasn’t fazed by the amount of form-filling that setting up a business requires. “I was actually surprised that planning permission wasn’t an issue,” she confesses. “But because the land can’t be seen from the road, the application went through smoothly and I got the go-ahead within two months.”

She employed a team of builders, and the first six months went well. Then the roofers went bankrupt and everything slowed down, but Katharine had already sold her house in London to raise funds for the build and now had to move into her not-remotely-ready French house. “It wasn’t ideal, but it actually helped me to refine the plans, and feel how the house could be used.” 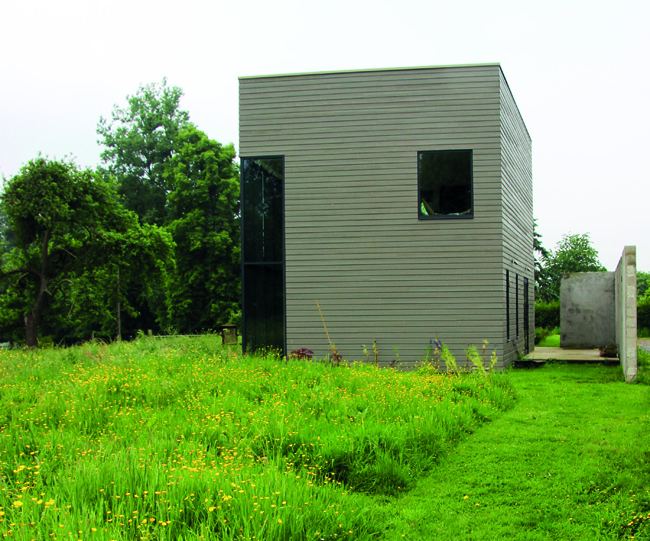 The three-bedroom cube is not like any other building in the village; it is ultra-modern with sleek lines and no hint of rural cottage. The house is one of a kind here for other reasons too. An ecologically built ‘passive’ house, it utilises a geothermal heating and dual-flow ventilation system. It’s very well insulated and just one wood stove heats the whole property. The kitchen is located in the centre of the house and serves both the café and residential side. Filled with light, there’s a mezzanine floor and double-height sitting room with huge windows that frame the views, and, of course, there’s the old tree.

The house took two and a half years to build. “On the whole it wasn’t too bad, and I have never regretted it,” says Katharine. “There were issues with the roofers, and some of the systems were new to the builders, but they were willing to learn. Just about everything was more expensive than I thought possible. I had to negotiate hard with the construction company to get a price I could afford. Also, as the architect was a Greek living in London, there was a bit of a culture clash with the French builders, but they worked it out and I’m really happy with the result.” 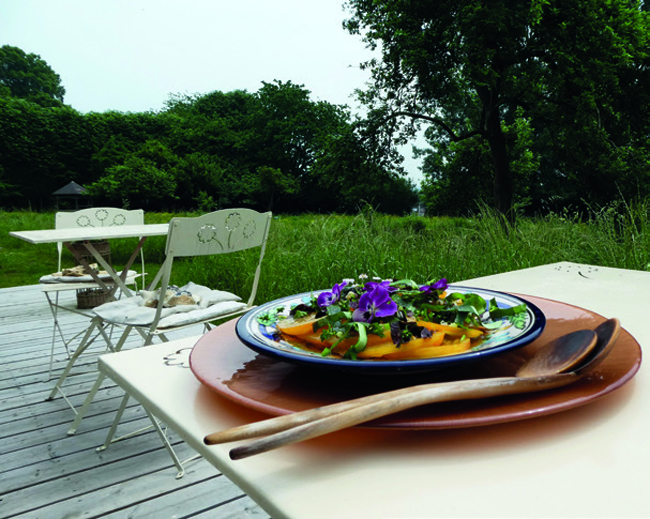 ‘Un encas’ is a snack and ‘une échoppe’ is an old word for shop and, tucked away from the road, it “seemed like the perfect name for my venture,” says Katharine. The café, which is in the shop, opened in September 2017 with a menu of local produce: pies and tartes, soups, savoury salads, quiches and other dishes flavoured with herbs, spices, edible flowers and zingy dressings. Katharine’s gâteaux have gained a reputation with the locals, especially the gluten-free German poppy-seed cake. French customers love her berry bread-and-butter pudding cake, served with locally made artisan ice cream. She also has a cake takeaway service offering anything from pumpkin pie to Christmas cake. Her gluten-free crispbreads are stocked in gourmet food stores in London and Paris, and served with meals at l’encas et l’échoppe.

The shelves of vintage and new French, British and European china, cutlery and tableware for sale are appreciated by the mix of French, British and Belgian customers who find their way to this little corner of France. “I love decorating a table, setting the places and making it look interesting and  beautiful with a mix-and-match approach, and I knew that in France there’s a long tradition and a strong love of table dressing.” Everything in the café  is served on an eclectic range of dishes, inspiring customers to see how to use and present the tableware on the shelves. 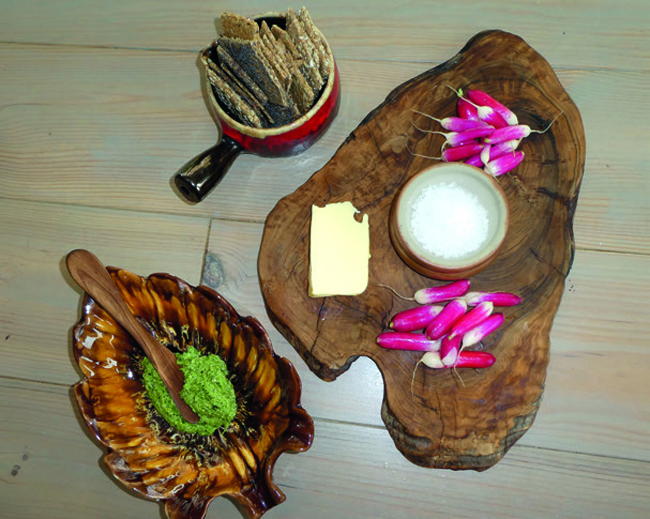 Open from April to December, Friday to Sunday from noon until 8pm, the café is becoming more and more popular, despite being off the beaten track. “There’s growth,” says Katharine. “Local businesses are recommending me, there are more and more reservations, and regulars are increasing, but there’s lots more to do.”

Her journey has been tough at times, but has been “rewarding, a voyage of self-discovery and a real adventure. I love going back to London,” Katherine admits. “But I have this truly distinctive home, and the traffic in the UK drives me mad, so many cars… Here I’m used to the only traffic jam being a couple of cows crossing the road to reach a field. I love my little urban oasis in the French countryside.”