Running an eco-gite in Normandy 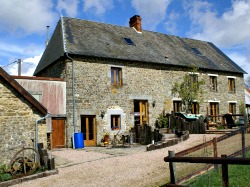 In 2007, the Hill family from Kent moved to Calvados in Normandy where they now run an eco-gite business. Here, wife and mother of two, Rosie Hill, shares their story with FrenchEntree – complete with faux pas and pigs.

We wanted to bring up our boys in a rural location with enough land to grow our own and rear animals. Unfortunately, the price of land in the UK made this difficult, so we chose the next best place! We had toyed with the idea of going to Italy, but felt it was a long way from ageing parents and not so green for visitors who would probably need to fly to our eco-gite.

What preparations did you make before you went out?
We felt that whatever we did beforehand would probably not fully prepare us for what life in France would throw at us and we would therefore just make the most of whatever came our way. I did however buy a very large dictionary, which has proved invaluable.

What do you do?

We run a smallholding to produce a good chunk of the food we eat. On the smallholding, we have a children-friendly gite. Simon has also recently set himself up as a landscaper and I am in the process or setting up a website called Children Friendly Holidays. I also seem to spend an inordinate amount of time ferrying the boys to music and sporting events!

How have you found setting up a business in France?

Dealing with all the paperwork has been a challenge. However, we have struggled on, improved our language skills and hope to have ticked all the right boxes on their seemingly endless forms. 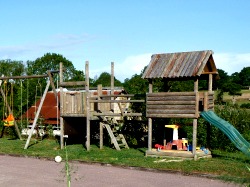 Where do you live? Describe the property.

Our smallholding is a couple of kilometres outside Lénault, a small village an hour south of Caen. We have just short of a hectare of land with lots of stone and wooden buildings for our menagerie of animals: ducks, chickens, turkeys, sheep, pigs, dogs and cats. The gite is in a converted hay barn, insulated to a very high level. We used as many recycled and reclaimed materials as possible during its construction. The gite garden has a seating area and walls made from reclaimed railway sleepers and close-by is the one thing that has got us more bookings than anything else – the large children’s play area.

How did you go about finding your home? Was it a long search?

It didn’t take that long although we didn’t end up where we first started looking. We began our search north towards Cherbourg, but it was a bit flat for our liking so headed further south into the ‘bocage’ with its rolling hills, woods and hedges. We began looking in December, found La Causserie in April and moved in August. 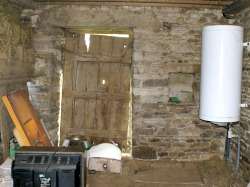 Did you have to do any work on your property?
The building that is now the gite was a hay barn and true to its name was full of old hay, so we couldn’t even start to convert it until we had removed all the hay. Then it was a case of ripping out the rotten floors and starting again to create the gite from the shell we had created. Our own house next door was at least habitable, but has needed (and still needs) a lot of work – we have added a bathroom, converted our loft and put in a lovely range cooker. Outside it has been a case of turning one large field into smaller paddocks with pens for the animals. We have also planted an orchard, erected a large polytunnel, planted new hedges, laid existing hedges and created a vegetable patch.

Could you speak the language? How have your improved your language skills?

Simon and I came with the French we had learnt for O Levels, but I have to say that whereas mine has improved a lot, Simon’s may have stagnated a little. That said, he can go into a DIY shop and always manages to get himself understood! The boys, at 4 and 5 when came had no French except bonjour (oh and Ben being a true boy knew the French for “bottom”!). However, two weeks after we arrived we put them into school and they are now fluent.

What have been the main challenges about the move? In hindsight, would you have done anything differently?

Language and trying to work through French red tape have proved challenging for us. For two countries who share so much history and who are physically so close, it still amazes us how different they are. Also with the recession, which hit just as we moved over, we found we have been unable to realise our dream (yet) of having two gites. Therefore with the blessing of hindsight, we may have been better off had we found somewhere with more land and fewer buildings. 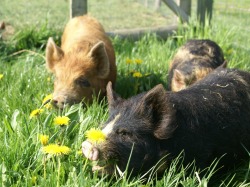 How have your benefited from the move? What do you like about the lifestyle?

I will not deny that it hasn’t been stressful at times, but when I am sat out in the garden typing this article and listening to nothing more than the birds singing, knowing that our two bilingual boys are out enjoying an afternoon with a friend in the village, I know that we made the right move. I was brought up on a farm in the Cotswolds and had long yearned to get back to rural living. I had always wanted to keep pigs which and we always have a moment of quiet pride when everything on our dinner plate is home-produced.

Has the family found it easy to integrate into French life?

Everyone has been most welcoming and we have made many good French friends. The boys are so French now in many of their ways, sometimes they even speak English in a French way! We enjoy the full gamut of local events, even if sometimes we have little idea what is going on.

What are the differences between life in France and life in the UK?

It is also quite an expensive country to live in, but on the plus side you can get a decent bottle of Cotes de Rhone for €1.49! I have nothing but good words to say about their health service with all of us using it for various reasons, including Ben getting a grommet operation just three weeks after first visiting the doctor with hearing problems. We had waited 18 months in the UK for the same operation. 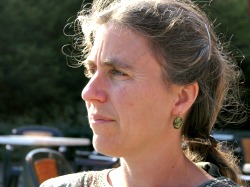 Do you go back to the UK regularly?

We try to get back a couple of times a year, but as we have so many friends who visit (and bring those all important supplies of Marmite and Cheddar) we do not feel the need to go too often.

What do you miss about the UK?

Simon does miss a decent pint of real ale sitting in a pub and trips to the theatre. Me? Not very much at all, except perhaps listening to Radio 4 in the car (our radio just will not pick it up).

A typical day is something we never seem to have. Hopefully at the end of each day I will have fed, watered and tended to the animals, got the boys to school, sports clubs etc and put a couple of meals on the table. After that, every day is likely to be very different. Simon may be out working or if at home doing more work to improve the house and grounds. I may be gardening, walking the dogs, keeping the house together, working on my new website or, as is the case at the moment processing all the fruit and veg coming out of the garden. In between all of this we have the gite to look after: replying to enquiries, cleaning, ironing, greeting guests and helping them to have the best possible holiday.

Is your move permanent or do you plan to return to the UK?

As no-one can predict the future, I would never say with hand on heart that we would not move back sometime in the future. With the boys midway through their education, we are settled here for the foreseeable.

For anyone who has ever struggled with French on the phone and all that non-pronunciation of the last letters of words, this may raise a chuckle. I was supposed to be visiting a friend at 11 o’clock but she rang up and said what I thought was “Can you come over at 12 o’clock.” When I arrived she looked somewhat surprised, asked why I was so late and had I forgotten her 12 eggs? (douze heures / douze oeufs with the silent fs at the end!).