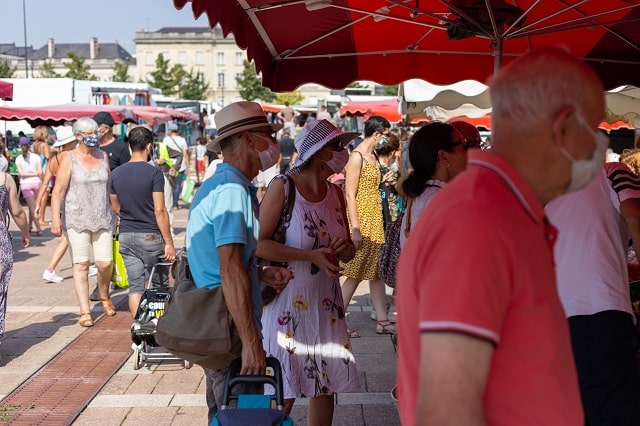 In this week’s French news digest, latest Covid-19 developments and patient figures, plus details of public places where a mask is now mandatory following a dramatic rise in cases. Plus, a heatwave update as France’s canicule looks to be coming to an end by close of play Wednesday.

According to the latest report from Santé Public France on Friday August 7, France reported 12 deaths in hospitals in the preceding 24 hours, bringing to 30,324 the total number of deaths. There were 2,288 new cases of contamination in the same 24 hours, making a total number of confirmed cases 197,921 since the pandemic began.

France currently has a total of 5,011 people hospitalised, including 140 new admissions. The country has 383 intensive care cases, up 21 new admissions in same 24 hours.

Figures as of last Friday

France currently has 184 cluster outbreaks, including 21 new ones.

The UK government is monitoring France’s containment of Covid-19, and has not ruled out adding the country to its quarantine list – meaning anyone who return to the UK from France would need to self-isolate for 14 days.

For updates on travelling to and holidaying in France, see the Le Staycation zone on our sister site, France Today.

In a bid to stall the worrying increase in contamination figures (especially in people aged 20-40), more and more French towns and cities are imposing mandatory wearing of masks in outdoor public places, with certain busy streets in particular being targeted. Rennes and Carcassonne were among the places added to the list of 1,400 communes over the weekend.

In Paris, a stroll along the banks of the Seine and in one hundred prominent residential and tourist locations around the city – such as the ‘butte’ at Montmartre, rue Saint-Honoré and shopping centre Bercy Village – are now mask-wearing zones for anyone aged 11 or over.

Here is a full list of the Paris locations affected.

Between 5,000 and 7,000 people were still present on agricultural land in the Cévennes National Park (Lozère) on Monday morning, following a weekend of partying.

Up to 10,000 ravers were present on Saturday night, in breach of the Covid-19 measure permitting just 5,000 people to gather in one place.

“Two squads of the mobile gendarmerie, 120 men, as well as 50 departmental gendarmes are taking turns on site to monitor the site and prevent vehicles from leaving for health issues, linked to the risk of spreading Covid-19, and also road safety,” the prefecture said yesterday. “Many people are not fit to drive.”

Banque de France figures showed a slight improvement in the French economic situation in July, with ‘activity’ down 7% on a typical July week.

The figure is in line with the forecasts announced last month and shows some recovery, after the -9% recorded in June and the loss of a third of business activity during containment.

“The July survey confirms this gradual improvement in the situation compared to the beginning of the confinement, even if activity remains below its normal level,” the Banque de France said.

The situation varies according to sector with industry “approaching its pre-crisis level in sectors such as food processing and pharmaceuticals” but “very deteriorated in other sectors, particularly in metallurgy, automobiles and other transport”, according to the study.

In services, the recovery also continues, but activity remains “far below normal” in some sectors such as accommodation and catering. Finally, activity continues to grow in construction and is approaching its pre-crisis level.

France’s gross domestic product fell by 13.8% in the second quarter, a historic plunge caused by the health crisis. Last month, the Banque de France forecast a 14% rebound in the third quarter.

Drought continues but heatwave set to end by Thursday

The canicule (drought) continues in France, and while the peak of the heatwave has passed, 15 departments are still on heatwave ‘red alert’ today.

These include the whole of Ile-de-France and Hauts-de-France, as well as Eure and Seine-Maritime. In addition, 53 departments are on orange alert. The orange alert has been lifted for Deux-Sèvres.

“Maximum temperatures will fluctuate a little due to cloud cover and the risk of thunderstorms, but they will remain generally in the same range as yesterday, often between 34 and 37 degrees,” France’s weather agency Météo France said.

However, while the heatwave “should last until the end of Wednesday, a significant drop in temperatures is expected from the west of the country on Wednesday and Thursday. On Friday, there will be no more talk of a heat wave in France.”

Check the alert colour coding for your department here.