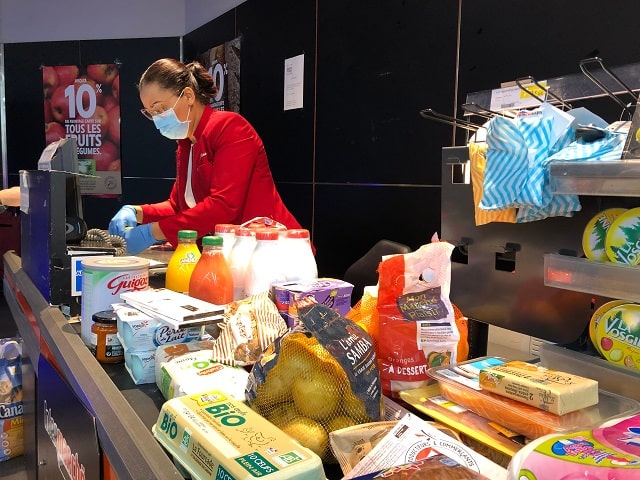 Welcome to the French news round up from FrenchEntrée. This week, as well as latest Covid patient figures and new mask-wearing obligations in shops and other indoor public places, we also report on the fire that destroyed the historic organ inside Nantes cathedral.

96 clusters of the virus are currently under investigation, the most in the Nord and Mayenne departments.

Mask-wearing in enclosed, indoor public places mandatory as of yesterday

Monday July 20 saw the implementation of a strict mask-wearing policy in all shops in France. On Friday, following advice from medical experts, the French government brought forward the obligatory wearing of masks in indoor, enclosed public places such as shops.

It was initially intended to be enforced from August 1 but on Friday, France’s Health Minister Olivier Véran wrote on Twitter: “Wearing a mask will be obligatory in enclosed spaces, as announced by [Prime Minister] Jean Castex. This includes shops, establishments open to the public, covered markets, banks…”

He also said: “barrier gestures and testing remain essential to fight effectively against this virus”.

Children under three do not need to wear a mask and those up to age 11 only need to do so if symptomatic and going into isolation.

Here is a full list of where masks are obligatory, as of yesterday:

‘Dynamic’ circulation of the virus

In a wide-ranging interview, Mr Véran appeared on franceinfo yesterday morning and said: “At this stage, we are very far” [from a second epidemic wave of Covid-19], “but we are seeing a dynamic circulation of the virus that worries us”.

He referred to “worrying signs of the epidemic’s resumption in some places”, with a “growing slope of virus circulation” that has led the government to “harden the position in relation to the health message, by making it mandatory” to wear a mask in enclosed public places. “We need a very clear message” on the wearing of masks, insisted Mr Véran, also affirming that he “trusts the spirit of responsibility of the French people”.

“We are capable of doing 700,000 [Covid-19] tests per week across the country,” Mr Véran went on to add. For people arriving in France, what he called “test barns” (temporary test centres) have been set up “within airports” since “last week”. According to him, at Paris’s Roissy airport “we are capable of up to 2,000 daily tests”, but it is still impossible to test all passengers with “more than 20,000 people arriving per day” from countries in the red zone [with high levels of infection].

On the issue of surgical masks, he said there are “more than 400 million surgical masks in national stock” and “more than 60 million FFP2 masks”. “We bought more than 4 billion masks. And above all, we now have the masks for the general public, which are washable, reusable masks that are available everywhere.”

During the summer, the SNCF is going to test a device for taking the temperature of TGV customers before they board the train, on a voluntary basis, as part of the fight against the Covid-19 pandemic. The first tests will be carried out from today, July 21, at Gare de Lyon in Paris.

Five “Health Kiosks” set up on the platform will allow passengers who wish to do so to measure their body temperature, using a thermal camera. Passengers will stand in front of the machine for four seconds and their temperature will not be displayed on the device. The data will not be stored.

The aim of the trial is to prepare for the possibility that the French government may make such checks mandatory in the event of a second wave of the epidemic, Alain Krakovitch, director of Voyages SNCF, told AFP.

Nantes cathedral arson suspect freed. A man working as a volunteer at Nantes cathedral, where fire destroyed the organ and stained glass windows on Saturday, was released by authorities on Sunday.

The Rwandan refugee, aged 39, was in charge of locking up the building the day before the fire, which is believed to have started in three different locations. Investigators have not ruled out accidental fires linked to electrical installations.

Jean-Charles Nowak, a cathedral clerk, told French newspaper Le Figaro the volunteer was “a man of duty” who had “suffered a lot in Rwanda” – which he left several years ago.
“I don’t believe for a second that he could have set the cathedral on fire. It’s a place he adores,” Mr Nowak said. More than 100 firefighters halted the destruction oif the main structure at the cathedral – which dates from the 15th to 19th centuries – with French Prime Minister Jean Castex praising their “professionalism, courage and self-control”.

The Economy Minister Bruno Le Maire announced the state would bear the cost of repairs “as quickly as possible”, saying it was part of “our culture”.

Previous Article Mortgage Update: “I have the cash…why should I use a French mortgage?”
Next Article Legal Obligations for Health Insurance and Employee Benefits in France