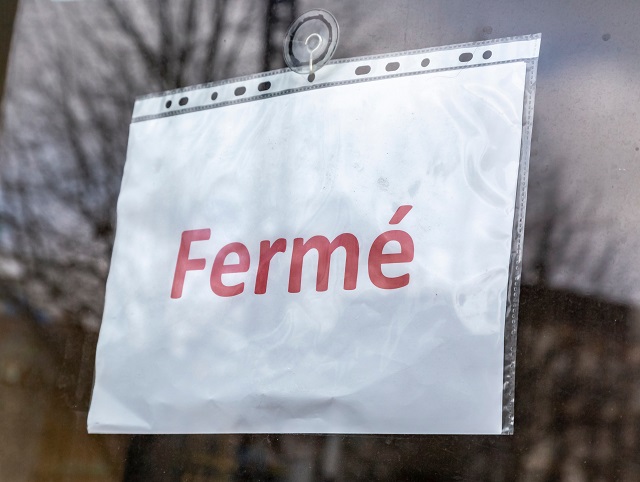 The latest report from Santé Public France revealed 310 additional Covid-19 related deaths in hospitals in the 24 hours to Monday.

This brings the total number of deaths since the beginning of the pandemic to 68,060. In the same 24-hour period there were 3,582 new cases confirmed, bringing the total number of cases to 2,783,256. However, late weekend reported figures are always lower – France has been struggling to get its new cases total below 20,000 for the last few days. There were 20,177 cases in the 24 hours to Sunday.

The positivity rate in France has risen to 6.5% and the reproduction rate R is 1.16, which means that the epidemic is still on the rise.

100 departments remain in a situation of high vulnerability, while the figures for hospitalisations and deaths by region in 24 hours are as follows:

France currently has 1,921 cluster outbreaks, including 725 in Ehpads. Cases of the more contagious “UK variant” of Covid-19 have spread beyond the first case in Tours, found in December – with cases in Roubaix, Marseille and Hauts-de-Seine

New measures to control the pandemic

To curb the Covid-19 outbreak, the government has said it may take further action in the coming days, including an extension of the curfew to the whole country. 23 departments now have a 6pm curfew, including the Var and Drôme departments, which were added to the list today. The 8pm curfew for the rest of the country remains in place.

A third full lockdown (thought to be unlikely), or simply “more restrictive” measures are on both the table. The government’s Covid-19 task force of senior ministers, called the Defence Council, is expected to meet tomorrow (Wednesday)

Speaking to Europe 1 yesterday, government spokesman Gabriel Attal said that a national reconfinement is not yet planned at this stage of the epidemic “but we are following the situation closely”.

Meanwhile the Culture Minister, Roselyne Bachelot, said on BFMTV, that even if reconfinement was not envisaged, several other scenarios were distinctly possible, such as regional lockdowns and extended curfews throughout France.

A senior member of the group told a parliamentary meeting that closing schools would be a last resort.

Bars, restaurants and cafés will remain closed until at least mid-February, while the re-opening of sports centres, cinemas, theatres, museums and ski lifts will be reviewed on January 20. A mooted re-opening date is the start of February.

FrenchEntrée readers should note that a travel ban is in place on visitors, including second homeowners, wishing to come to France from the UK. However, provided that they can show a negative Covid test result from the 72 hours before departure, French citizens, EU residents, lorry drivers and students can travel.

Vaccination strategy under the microscope

The Minister of Health, Olivier Véran, is today due to explain the widely reported failings of France’s vaccination strategy, as well as the unclear communication of vaccination numbers, in front of the social affairs committees at the Assemblée Nationale from 12pm and the Senate from 5pm.

As of yesterday, just 138,000 people had been vaccinated in France, with major regional differences in the pace of the programme’s rollout.

The vaccination campaign is set to accelerate this week and next. Up to now, vaccinations have only been given to the elderly in care homes or long-term care units, as well as all caregivers, firemen (first responders in France) and home helpers over 50 years old with health issues, plus vulnerable disabled people in nursing homes and specialised care homes.

As of January 18, vaccinations will be extended to all people over 75 years of age.

As in the UK, the army is now helping out in France with logistical issues and transport of the vaccine around the country.