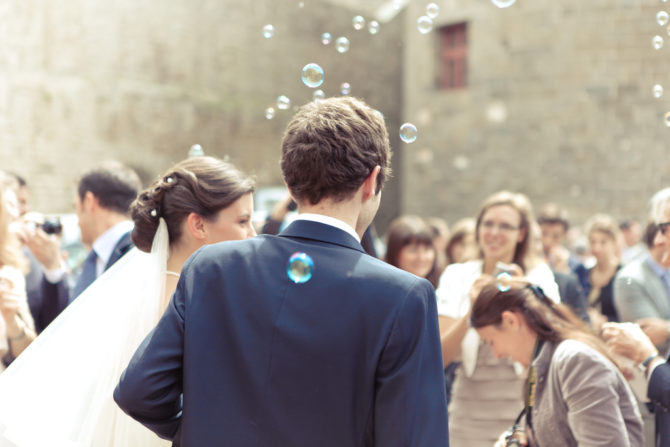 If you are lucky enough to have been invited to a wedding in France, or are planning to get married here, then here are a few wedding traditions you might not have seen before.

Every region in France has its own set of wedding customs and modern couples may not include them in their day at all or may change them slightly, but with a country as diverse as France is it any wonder there’s so much difference?

Immediately following the wedding ceremony there may be a vin d’honneur, a kind of mini-reception usually close to the location of the ceremony, such as a church garden, or sometimes held in the same place as the main reception. The vin d’honneur can last for a couple of hours while canapes and cocktails are served and the bride and groom meet their guests after the ceremony. This time allows the bride and groom to relax as well as meet those guests who are not invited to the wedding reception, such as work colleagues or neighbours. Champagne, wine and cocktails such as the ‘Kir Royal’ are often the drink of choice at the vin d’honneur.

Instead of a tiered wedding cake at a French wedding you might see a croquembouche – an outrageously delicious pyramid of caramel covered profiteroles!

Choux pastry puffs are filled with vanilla pastry cream, coated in a thin crust of crispy caramel and “glued” together with melted toffee or chocolate ganache. These towering pyramids are often covered with webs of spun sugar but can also be decorated with fresh flowers, chocolate and sugar roses, cake toppers, chocolate drizzles or fresh fruit.

The traditional way of cutting a croquembouche is for the bride and groom to cut off the top with a sword while the bridesmaids hold up the corners of the table-cloth to catch the pieces!

One sweet tradition is to have prettily wrapped candy-covered almond favours called dragées to hand out to guests as a wedding keepsake. Some couples prefer to change this tradition slightly to reflect their preferences and offer a whole range of sweet-treats including chocolate bonbons, mini macaroons, truffles, local specialities or even jelly beans instead of sugared almonds.

If you’re at a wedding in the Vendée you might be lucky enough to see a very special dance with a rather large brioche. The bride and groom are presented with a giant brioche, often weighing more than 20 pounds, on a platter which they and their guests must hold aloft as they dance to prove their strength!

On their wedding day the newlyweds are transported in a cart drawn by a donkey, and they hold a chamber pot to announce the ceremony to the villagers (this ride was called ‘the donkey dance’). The day after, very early in the morning, the villagers had to hunt for for the newlyweds to give them the chamber pot (this was called “The running after newlyweds”). The running was a success when the villagers had found the couple. As soon as they were found, they had to drink the contents of the chamber pot, the bride first, then the groom and finally, the villagers. The content of the chamber pot was intended to give vigour to the couple after the wedding night. This tradition started in the Aveyron and depending on the region and can contain bananas, alcohol, chocolate, spices, bread…