The First and Biggest of Its Type

Plans for a major new ski property development within the first and biggest eco-village of its type in the French Alps are announced by the region’s leading developer, MGM.

Kalinda Village – comprising a brand new residence de tourisme of 250 ski-in, ski-out apartments for sale on a leaseback basis and an adjacent 28-bedroom hotel – is described as a ‘state-of-the-art example of sustainable development.’ It forms part of the €150 million transformation of the old village of Tignes les Boisses into a modern ski centre re-named Tignes 1800.

When it opens for business at the end of 2014, Tignes 1800 will, in effect, be a new ‘gateway’ to all the established areas of the wider Tignes ski resort. Val d’Isere will be just five minutes away by road. 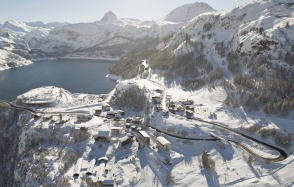 The new eco-village was planned in response to the need for new accommodation for 1,500 skiers in one of the most popular skiing areas in Europe while responding to the challenge of building a sustainable development. This included a strong desire to heat the properties in a cost-effective way which conserves fossil fuels and has low carbon emissions, despite being located in one of the coldest places in Europe. Winter temperatures are typically around -20°C.

Finished externally in traditional stone and timber, all the apartments will come with underground parking, cellar storage, locker rooms, laundry and drying rooms. Each apartment will have exceptionally high levels of insulation, with low-cost under-floor heating being supplied by an innovative new plant – the first of its type in the French Alps – run on wood waste pellets fuelling a 4,000 kilowatt boiler supplying heat to all the buildings in Tignes 1800. Four-star facilities within the residence will include an indoor pool, fitness suite, gym, sauna, jacuzzi and steam rooms, as well as a beauty centre with a variety of treatments on offer.

The family-orientated pedestrianised village of Tignes 1800 will include a tourist information centre, 10 shops and a ski school. There will be a choice of bars and restaurants with frontages both on the village square and the piste. A conference centre will be located within the new hotel.

MGM’s apartments are expected to have special appeal for British families who can start buying the properties off-plan now. Prices, which exclude French VAT at 19.6 per cent, waived under the leaseback scheme, start at €205,000 for a one-bedroom apartment with a floor area of 37.5sqm rising to €822,000 for a five-bedroom property with a floor area of 158sqm. Construction will start in the spring this year and 78 apartments in the first phase will be ready for occupation at the end of next year. 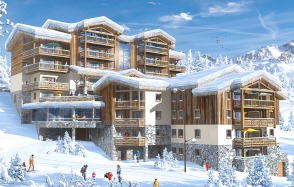 Meanwhile, as this season’s skiers in La Rosière celebrate its first half century with torchlight processions and games on the slopes, as well as festive mulled wine and hot chocolate at its 50th Anniversary Ice Bar, MGM has marked the occasion by announcing plans to build new ski properties in the centre of the Haute-Tarentaise village.

Occupying the site of the former Roc Noir Hotel, the new Lodge Hemera residence de tourisme will comprise 29 leaseback apartments just 250m from the nursery slopes. Available to buy off-plan now, they are priced at €238,294 for a one-bedroom property rising to €468,227 for a three-bedroom home (prices exclude VAT waived under the leaseback scheme).

When the residence opens next year, owners will have use of all its four-star facilities, including an indoor pool, fitness suite, gym, sauna, jacuzzi and steam rooms, as well as a beauty centre.

La Rosière was built on the former Roman road through the Petit Saint Bernard Pass linking France with Italy. Occupying a sunny south-facing mountain ’balcony’ at an altitude of 1850m, the resort has access to 150km of pistes within the Espace San Bernardo ski area which embraces La Thuile in Italy.