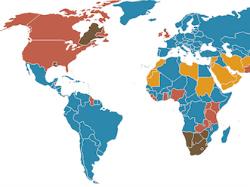 Unlike the French legal system, the English framework is in general terms, based on jurisprudence or case law. The English legal system of common law is the basis of the legal structure of many English speaking countries from England to Australia to Brunei.  The French legal sytem, however, is based on civil law meaning that it is codified and it originates from Roman law. The legal system in France can seem foreign to us, but, on the flip side of the coin, the concept that a law that has never been written down is still considered a law can be very confusing to the French. So what is civil law and how does it differ from the system of common law ?

First let’s look at the system of law used in most English speaking countries. The Economist explains that “the system emerged from pre-Norman times where rules where different in each part of the country. To provide consistency, justices created a common law by drawing on customs across the country and rulings by monarchs. These rules developed organically and were rarely written down.  It incorporates backdated influences from the Bible and from the Romans and Normans. When making a decision, court judges are largely bound by the rules and other doctrines developed by earlier courts.

The CIA world factbook indicates that the legal system of England is also in force in approximately 80 countries formerly part of, or influenced by, the former British Empire.

According to the World Bank these are the main features of the common law system:

Generally speaking, a civil law system more prescritive than its common law counterpart. It is largely based on Roman law. In terms of a contract, for example, even if the clause is not expressly written down but is contained in the pertinent contract law code, the clause will apply. Therefore there is less of an emphasis on setting out all the clauses to the contract since the restrictions covered by law will apply even if they are not expressly mentioned.

The salient features of the civil law system are:

To add to the mix, there is another layer of legislation in the case of countries that are members of the European Union. Although the ratification of a European constituion is still a work in progress, the European law system as it stands today is based on a set of rules expressed in a body of treaties and legislation.