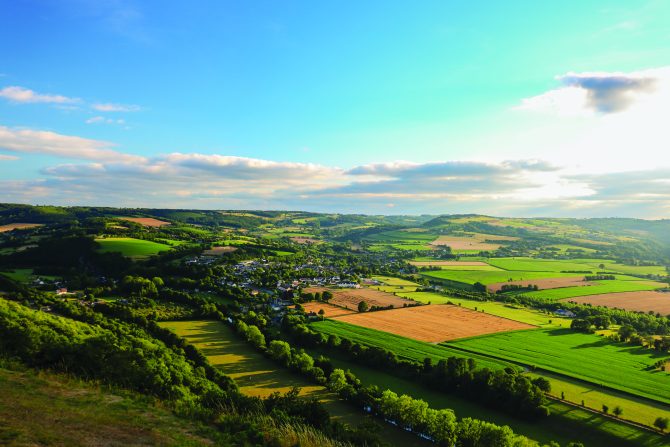 If you are dreaming of a rural escape in France, you may well find just what you’re looking for in ‘Swiss Normandy’. As its name suggests, La Suisse Normande is not at all flat and, while not quite offering Alpine peaks, the landscape features rolling hills and wooded river valleys. Stone houses nestle together in pretty villages, all within an hour’s drive of the ferry port at Ouistreham and the Second World War landing beaches.

We began our exploration in the pretty village of Le Hom, half an hour’s drive from Caen, where I resisted a delicious-looking tarte Normande in the window of one of the village’s bakeries… and spent the rest of my visit regretting the decision. In fact, I still do!

Without any apple-based loveliness to fortify us, we set off to explore the natural beauty of the area. From Le Hom, we followed the meandering River Orne to the base of Le Pain de Sucre, or the Sugar Loaf. Like its Welsh counterpart, this natural promontory has spectacular views. We spent about an hour winding our way through pretty woodlands and catching glimpses of the Orne, each view showing us more of the river below.

Finally, we emerged at Les Rochers des Parcs used, unsurprisingly, by paragliders and offering far-reaching views over the area and the dramatic loop, one of just many across the area, of the river below.

When we headed back to Clécy we had chance to walk around the village and discover the Hardy Museum, based in the former home of Impressionist painter André Hardy, above what is now the tourist information centre. Beautiful views are something we found in abundance across La Suisse Normande and many of the works displayed feature these local landscapes: it’s clear to see Hardy found plenty here to inspire him. A visit to the little shop next door to the museum netted us some delicious local cheeses. We chose a Camembert, naturally, as the town it is named after is only an hour away, but also two harder cheeses made locally – Tomme de Pré-en-Pail, which tastes a little like cheddar, and the mild, slightly sweet Tomme de Carrouges.

Some light and fruity cider, made just outside Clécy at Cave de la Loterie, proved to be the ideal accompaniment to the cheese. Obviously the apple tart I didn’t buy would have been the perfect way to end the meal, but I didn’t buy it, so it wasn’t.

We enjoyed the tart-free meal back at our cosy gîte, on the edge of the village of Clécy. Even this offers a view across the river and back towards Les Rochers des Parcs from its little balcony. Called La Petite Suisse, it was once a hotel and, like many of the houses in this area it was built from stone over 100 years ago. Sandstone and grey and rose granite are used in buildings across La Suisse Normande, often paired with slate roofs, a combination which is strikingly appealing.

According to estate agent Emmanuelle Soria, of Pozzo Immobilier, homes with a bit of character are what most British buyers look for. “They’re not afraid of hard work and have plenty of appetite for renovation,” she says. “What attracts them to the area is the tranquillity and the abundance of old stone properties with land.

“The location is ideal too: we’re close to Caen while Mont St-Michel and St-Malo are also not far away. The villages of Le Hom, Clécy and Pont d’Ouilly are charming and the whole area is very beautiful – everyone loves it here.

“Often people are looking for a principal residence and this is the ideal spot. The beaches are under an hour away and there is good employment locally as well as opportunities to run your own business. Buyers also love the fact that La Suisse Normande is rural but without intensive agriculture and the use of pesticides that can sometimes accompany that. You’re really in the heart of nature here and it’s a great place to live with very little pollution.”

Emmanuelle says that prices in the region are average for France. “An old house in habitable condition will usually be around €200,000 to €250,000,” she says, “and often we’ll find that Brits are cash buyers.

It’s easy to see why you’d choose this spot for a second home: it’s readily accessible from the UK and it’s very beautiful. This is also a good place to put down permanent roots though, and there is plenty to do if you love the outdoor life. As well as paragliding, which we weren’t quite brave enough to try, there are plenty of opportunities for hiking, mountain biking and river sports. There’s even a Via Ferrata for climbers and horse-riding and pony trekking are understandably popular.

Feast for the eyes

One activity that we did all thoroughly enjoy was the monorail luge just outside Clécy. Descending over 650 metres, it offers, as we’d come to expect by now, wonderful views across the valley down to the Orne river. You can appreciate the scenery by gliding gently along, or opt for a faster descent if you’re feeling brave enough.

Clécy is also home to another of the region’s treasures: Le Monde Miniature, an extensive model railway which is the work of a father and son Yves and Emmanuel Crué. Together they have created a magical landscape filled with towns, villages and lots of little cameos. There’s a burning house with firefighters on scene, an ice rink with tiny pirouetting skaters, a supermarket full of shoppers and, winding through it all, is the miniature railway complete with tiny travellers.

All this sightseeing worked up an appetite and, on the banks of the river, we found the restaurant Aux Rochers presented the opportunity to sample the Camembert and cider for which Normandy is famous. While we dined, we enjoyed views across the river valley from the airy conservatory, backed by the rock face after which it is named. Spectacular views and wonderful food: life doesn’t get much better than this.

The following day, we headed to Château Ganne, close to the village of La Pommeraye. Here we found a reminder of one of the area’s most famous inhabitants and of the resulting close, if often somewhat fractious, ties between England and France.

The ruined castle, parts of which date back to the 10th century, was home to Raoul 1er de La Pommeraye, one of the knights who accompanied William the Conqueror, or Guillaume de Normandie as he was known at that point, on his fateful mission to take the crown of England.

What remains on the promontory is atmospheric and allegedly even haunted by a young woman called Mélia la Blonde. According to legend, Mélia, the daughter of the lord of the castle, was tricked into opening the gates of the besieged fortress, and after witnessing her father being tortured to death, she killed herself. Apparently, her screams still ring out on moonlit nights. In the autumn sunshine, however, the castle was peaceful and blessedly free of violence. In fact, the only other two visitors appeared to be engaged in a quiet, and completely peaceful, session of Tai Chi. It’s hard to imagine a more idyllic spot for such a meditative activity.

Which pretty much sums up our experience in La Suisse Normande. It’s like a picture postcard. You think you’ve discovered the prettiest village the area has to offer or found the most beautiful scenery and then a new view quietly takes your breath away.

Take La Roche d’Oëtre, for instance. It wasn’t quite a 360-degree view, but as far as the eye can see from east to west and beyond were rolling forests, spectacular in their autumn colours, with patchwork fields and occasional houses dotted here and there.

From this wide-angled view, we wound our way down through the trees. It was peaceful and incredibly calming to meander along beside the river before hiking back up to the top once more. Arriving at a different point, life got even better when we discovered a café with a huge picture window and outdoor seating where you could relax and admire the scenery.

I fell more than a little bit in love with the outdoor life and spectacular views around almost every corner in La Suisse Normande. I can completely understand why you would choose to make a home here. If you do decide to visit with a view to making the move, take my advice though and don’t resist the tarte Normande aux pommes. You really will regret it. Previous Article 23 Tried and Tested Tips for Learning French in 2023
Next Article France’s Chèque Énergie: Who is Eligible & How to Use It