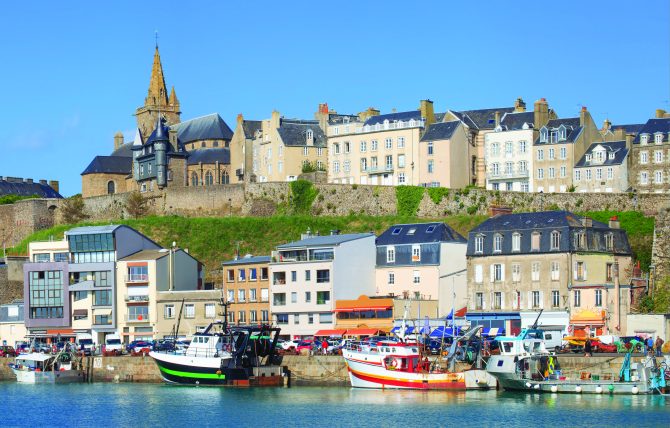 Part of Normandy on the northwest coast of France, this French département is named after the English Channel – known to the French as ‘La Manche’. Its proximity to the UK and the fact that it includes the key port of Cherbourg, mean that it’s a great choice for holiday homes and long weekend trips, but also for couples or families needing to keep an option open for Channel-hopping, whether for work or for family visits.

Geographically, you’re looking at the 355km of coastline to the right of Guernsey and Jersey, reaching from La Hague and Cherbourg in the north, down to Mont-Saint-Michel and inland to Sourdeval and Saint-Lô. The landscape feels spacious, offering farming fields and moors, woodlands and wetlands, historical buildings and charming villages: it is fabulously French.

Of course, being in Normandy, La Manche has a definite agricultural feel, yet also a fascinating diversity within a small area. There are innumerable stone cottages and barns here, but also luxury apartments in elegant coastal resorts, and while Cherbourg-Octeville is home to around 79,000 people, the vast majority (77 per cent) of towns in La Manche have fewer than 1,000 residents. It’s a great area for village life, outdoor activities and natural beauty and is the perfect spot for house-hunting.

Budget: What can you get for your money?

Compared to the UK, house-buyers can get a lot for their budget in La Manche, where properties cost an average of €1,470 per m², well below France’s average of €2,490 per m² and the €3,530 per m² average in England and Wales. Unsurprisingly, the most costly areas are those that offer the most employment (Cherbourg) or are most appealing for tourism (Granville or Mont-Saint-Michel); and the least expensive areas are the furthest inland from the coast.

Location: Where to find what you want?

Any city-dwellers or commuters will be keen to look at Cherbourg centre (€2,130 per m²), which has 79,000 residents including students at the university institute. It is also home to one of France’s key ferry ports for cross-Channel commutes, and is a three-and-a-half-hour direct train ride from Paris Saint-Lazare, so it has high appeal and high prices. You could buy a one-bedroom apartment there from €125,000 or a new-build house for €285,000, with cheaper options further from the city centre.

The most sought-after – and therefore most costly – area in La Manche is around the elegant seaside resort of Granville (€3,080 per m²), a favourite with chic Parisians who can take a direct train that will get them there in three or four hours. Tiny, 18m² studios start from €75,000, while a central or seaview studio costs from €165,000. Apartments are rare in La Manche, where 81 per cent of properties are houses, but in Granville they might be your only option. A one-bedroom house there can easily fetch €250,000!

Also high on tourism wish-lists would be Mont-Saint-Michel, which attracts nearly three million visitors each year, so the area has real potential for high yield if you’re planning on renting out. This area can be quite affordable, offering apartments on a modern complex for €215,000 or a four-bedroom bungalow with pool for €280,000, and even the occasional renovation project for around €100,000.

There’s no shortage of renovation projects in La Manche for less than €50,000, either surrounded by land or in villages, but do investigate the amount of work required: there could be a very good reason for the low price! For great value, look inland in the triangle between Coutances, Saint-Lô and Villedieu-les-Poêles, or south of Vire around Sourdeval. One example is a two-bedroom home in Sourdeval for €46,500 that is currently rented out for €300 per month. A budget of just €55,000 will certainly buy a small countryside home or townhouse in La Manche, probably one that needs some restoration, but could be used straightaway.

Finally, building plots: €50,000 could buy you a generous 2,265m² plot near Carentan at the northeastern base of the French Cotentin Peninsula, a countryside plot of 3,900m² in Besneville to the west, a 1,070m² village plot inland at Parigny complete with connected utilities, or even a 500m² plot in the bay of Mont-Saint-Michel.

Transport: How to get around La Manche?

While this part of France isn’t ideal for air travel (the nearest big international airport being in Rennes, which is an hour south of Avranches), it is very well connected in other ways. There are 14 train stations in La Manche, including direct lines that will see you in Paris in as little as three hours; and five ports including the year-round, cross-Channel lines from Cherbourg. It’s also one of France’s best-connected areas in terms of road access, with 2.6km of roads per km². From Coutances in the centre of La Manche, it’s a 70-minute drive to Caen, 90 minutes to Rennes, two hours 40 to Nantes and less than four hours’ journey to Paris.

Employment and Economy in La Manche

La Manche boasts low unemployment rates of 5.8 per cent (the national average is eight per cent), and nearly 75 per cent of residents aged 15 to 64 are classed as ‘active in the workplace’. Tourism is a key employer, and 30 per cent of job offers in La Manche are seasonal, notably in accommodation and catering. In terms of geography, 33 per cent of tourism activity is focused around Mont-Saint-Michel, followed by Cotentin, Coutances and Granville, as well as Cherbourg.

Outside tourism, Cherbourg and La Hague are employment hotspots for office work and jobs connected with Channel crossings; only three per cent of workers are in agriculture, 29 per cent are employees, 28 per cent manual workers and 24 per cent middle management.

Alyson and David Asquith moved to La Manche in 2012, settling in Amfreville, south of Cherbourg, where they run a stunning guest house five minutes from Sainte-Mère-Église

“We’re both from Yorkshire,” explains Alyson, “but we spent 20 years in Germany as David was posted there. On leaving the forces, he happened to visit Normandy on a battlefield tour and came back suggesting that we open a B&B in France!

“We’d travelled to France a few times and agreed to look for houses in Normandy then Brittany, but once we’d seen this place we fell in love and never got any further. We could see the potential, but it took eight years to renovate. It was quite an experience, and the property itself dictated a lot of our choices. The house is 300 years old – I call her ‘my old lady’ – and we wanted her to look just right before welcoming guests.

“As for French life, everybody is very friendly. Eventually, you learn a different approach to timings and deadlines, and come to accept that the important thing is that everything is moving forward.

Director of the estate agent Agence Newton, Sheelagh Gorham, shares her extensive knowledge of La Manche, its properties and hotspots.

“As in most parts of France, you’ll pay a premium for homes on the coast, particularly around Granville, whose elegant charm and popularity with Parisians have earned it the nickname ‘Monaco of the North’. “The market has changed dramatically in the past five years, following Brexit and the pandemic. Not only are there fewer British buyers, there are simply fewer properties available. Luxury properties and châteaux still take time to sell, but many of the smaller, rural houses sold in 2020 and 2021, so across the region there’s less choice than before, especially in the €150,000 to €300,000 bracket. This means that buyers need to be prepared to act quickly, with a deposit ready if they want to secure a property.”

Looking to move to La Manche?

Having found out a little more about La Manche, do you feel that this could be the location for you? If so, browse our property pages

Properties for sale in La Manche

Previous Article Do we need Planning Permission for our Pool? French Property FAQs
Next Article How To Get a Flu Vaccine in France