Pigeon Houses in the Tarn – Pigeonniers 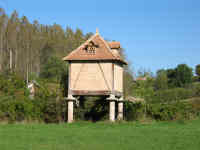 House-hunters in Tarn Have a New Flight of Fancy

House-hunters in France have a new flight of fancy by buying and restoring pigeon towers. Pigeon towers can be the most elegant of farm buildings, often more appealing than the houses to which they belong. Wide interest is now taken in the pigeon houses themselves despite the fact that they were in reality only part of farming properties.

In the Midi-Pyrenees region, especially in Haute Garonne, Tarn-et-Garonne, Gers, Lot and Tarn are the greatest number and variety of pigeon houses. However the Tarn is leading the way with the highest concentration where approximately 1700 have been counted being of exceptional variety.

All have a distinct, different character and some have been converted into gîtes, and others function as garden stores or swimming pool changing rooms also many have been integrated into the main house. However many still remain more or less derelict awaiting the imaginative touch of a creative owner.

How much for a pigeonnier?

Types of Pigeonniers in the Tarn

In the Lacaune and Montagne Noire regions, which are traditionally poorer in agriculture, the construction of pigeon houses was less favoured. Despite their diversity in style, four large categories can be distinguished in the Tarn. In the wine producing Gaillac area covering Labastide de Levis, Fayssac, Cestayrols, Cahuzac Sur Vère as far north as Vindrac, we find the “Gaillacois” type. They are characterised by a square building whose pyramid shaped roof has four narrow steep sides. The Toulouse or “mules foot” type and the arcade style are concentrated in the Albi region and in the Tarn and Dadou valleys. In the Castres area, pigeon-houses were built of sandstone from the Naves quarries and feature slate roofs. They are characterised by their pinnacles, some of them more than 3 meters high. They can be seen mostly in the triangle formed by Castres, Puylaurens and St Paul Cap de Joux.

Construction of these pigeon houses date between the 16th and 19th centuries. Types of construction range from a wooden house supported by wooden posts, to solid square towers of stone, supported on stone pillars. Many are also inlayed with brick.

Most are isolated constructions in the countryside for three main reasons:

1. Pigeons need tranquillity, and peace. They must at all times, be able to keep watch over their homes and the countryside in case of an attack from predator birds or other animals.

2. And it’s advisable to keep the houses away from wells or drinking water used by the farm.

3. Also the farmers set them distinctly away from the main house to ‘show off’ their pride and joy. It seems that they tried to out do each other, with better and different designs.

The pigeon house was also often used as part of a girl’s dowry. At the marriage of Marguerite Gralhet, in 1564, she offered her father’s pigeon house. Farmhands could also sell the pigeons for ‘pocket money’.

No other farm animal or bird has ever received so much pampering.

Pigeon meat was, and still is, highly appreciated when the birds are young.

Their droppings were used for precious fertilizer. In wine producing regions, pigeon manure was used to fertilize the vines.

The pigeon was used also as ‘air mail’ messengers, up until Word War I — when a military pigeon house was constructed in Albi.

Thus the curious relationship between pigeon and man has evolved over the centuries. The high status of the pigeon stayed around until the Industrial Revolution when modern technology took over from our winged friends. Also awareness of public health increased and thus fewer pigeonniers were built.

So while pigeonniers continue to add status and value to a house, their original inhabitants are now considered by many to be a pest.

Where to find pigeon houses in the tarn?

Here’s a small list of quaint towns and villages where some pigeon houses can be found:

Stop, look and wonder. You won’t be disappointed!