Let’s say you are looking for a home in France, but not the typical character house. So what are your choices if you fancy something a little different?

We all know that France is home to some wonderful architecture. Who wouldn’t succumb to the charm of a château, maison de maître, longère, mas or a pretty little stone cottage or farmhouse roofed with the local stone, slate, or terracotta tiles? However, there is one type of architecture that is seldom mentioned in property guides: modernism (or post-modernism as this 20th-century genre became known post-war). So, as a fan of these wonderful buildings I thought I would try and put that right.

My appreciation for architecture evolved from experience. The first house I bought together with my husband in Berkshire had been designed by a Canadian architect in 1967 and opened our eyes to the difference that design could make in our everyday lives. We absolutely loved the light from the huge windows. The home was different – and we like different! Ever since, I’ve taken an interest in modern architecture and collect mid-century furniture. Our home in France was designed by Breton architect Michel Velly in 1978. We love it! The joy of living in France is that we would never have been able to afford something like this where we lived before.

France has some truly outstanding modernist and contemporary architecture, not just public buildings but also private dwellings. Many post war French architects were heavily influenced by the likes of Le Corbusier – who although born in Switzerland came to be known as the father of French modernism – Robert Mallet-Stevens, Frank Lloyd Wright, Mies van der Rohe, Alvar Aalto and Walter Gropius’ Bauhaus movement of the 20s. Le Corbusier’s Villa Savoye and Mallet-Stevens’ Villa Cavrois are now national monuments. Some architects chose to follow the brutalist ethos of concrete and glass, whilst others were influenced by new materials and production techniques or local vernacular architecture.

The Villa Cavrois is a remarkable example of civil architecture from the first half of the 20th
century, and the architectural manifesto of Robert Mallet-Stevens. It is located in Croix, in the residential suburbs of Roubaix near Lille in northern France. The building was designed in 1929 and work on it completed in 1932. After extensive renovations it was opened to the public in 2015 and is now part of Centre Monuments Nationaux and the Iconic Houses Network. 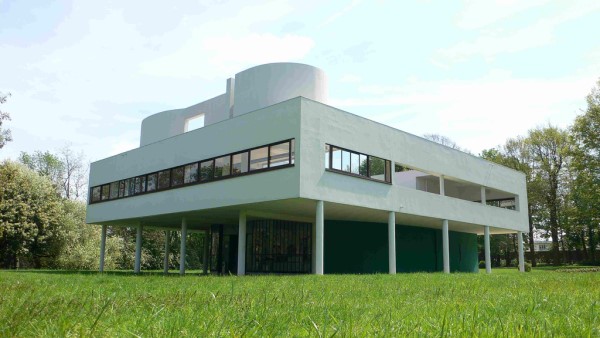 The Villa Savoye, located in Poissy to the west of Paris, is the last in Le Corbusier’s white villa cycle and a perfect summary of the modern architectural vocabulary. It was listed as a historic monument in 1964 when Swiss-born architect Le Corbusier was still alive, an extraordinarily rare occurrence.

The 60s and 70s were especially important for French post-modernist houses. Architects allowed their imagination to run wild and gave us such wonderful designs as the bubble houses of Pascal Haüsermann in eastern France or Claude Parent’s winged house near Paris. Unfortunately, this was also the time when people lost faith in the movement due to the excess amount of poorly designed (and poorly built) social housing cropping up in cities throughout the world. Nevertheless, the purest principles of modernism persist and still influence how we live today.

These notes are meant as a general reference to modernism, but there are very specific styles of architecture within the post-modernist and contemporary umbrella. These buildings may not suit everybody, but they are historically important, as they influenced the architecture and design of today, and will continue to influence it in the future. They were innovative in the use of new building materials and practices and should not be dismissed. They do not have to be shrines to minimalism, as over the years their French owners have continued to furnish them as they want, rather than to the dictates of fashion. Many of them are now coming onto the market for the first time in their history. Often, they have not changed since they were first occupied and act as time capsules for a time gone by. Most are not listed as historical, so they can be modernised and renovated – in sympathy to the original design, hopefully – without special permissions. However, if you are thinking of taking on one of these properties, be warned, it will be a labour of love. I should know, we live in one such house.

Houses by famous architects come at a price, usually a pretty hefty one, but if you are prepared to search for those designed by lesser known regional architects, then there are some real gems. Many represent excellent value for money as they provide large, light, airy living spaces plus the bonus of living in an extraordinary, unique environment and a piece of architectural history.

•With thanks to Wowhaus for continually surprising me at just what is out there and inspiring me to put my feelings down on paper.

Are old stone homes not for you? Perhaps you are considering a newbuild in France? Start your search here.