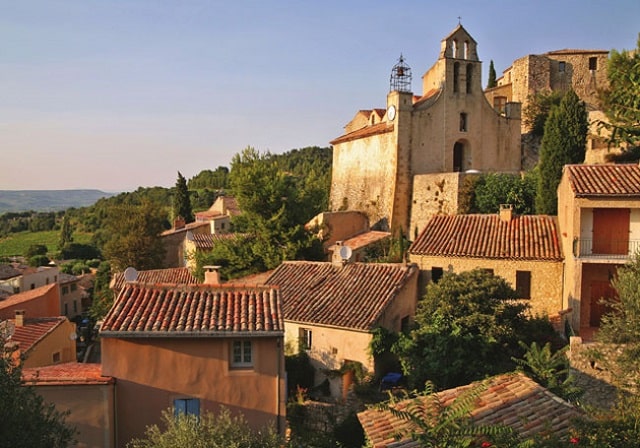 You’ve doubtless sampled Rhône wines, but have you visited the villages named on the bottles? If not, you’re really missing out, as Roger Thomas explains…

About ten years ago, my local supermarket started to stock Cairanne wine, which was a bittersweet moment. There it was, on the shelves for the first time, alongside familiar bottles from the likes of Beaujolais, Bordeaux and Burgundy. But why did I find it bittersweet? Well, Cairanne wines were something of a personal fiefdom – a knowing little secret of mine I kept up my sleeve as a party trick. 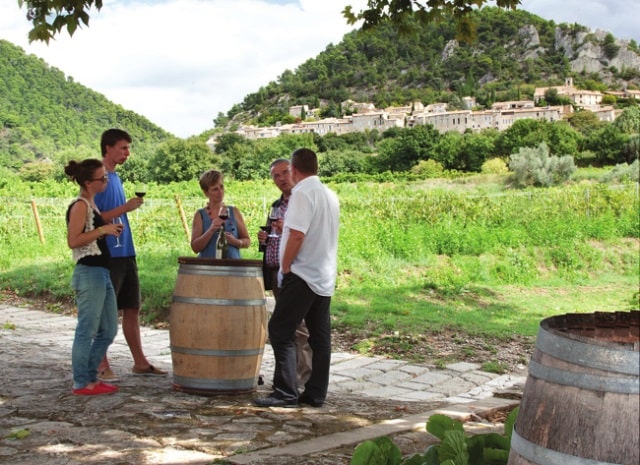 Cairanne is a village in the southern Côtes du Rhône wine-producing region which, until relatively recently, remained unheralded in the UK. I’d take great pleasure in producing a bottle of Cairanne wine, then pouring a rich, red and revelatory glass for friends, who were all virgins when it came to  ‘village vino’ from the hills flanking the Rhône Valley, east of Orange. 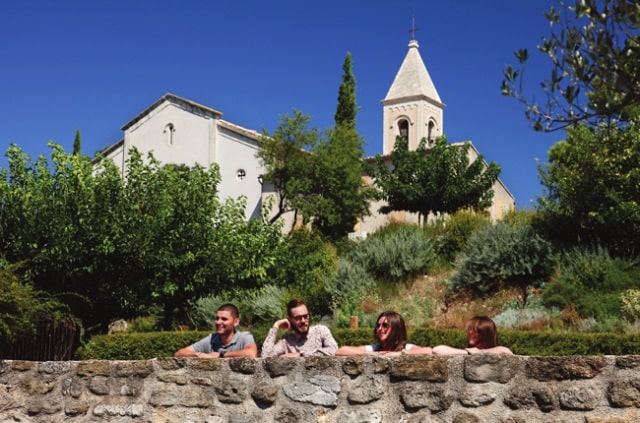 Happily, Cairanne, along with neighbouring villages like Rasteau and Gigondas, are now fairly familiar names on our supermarket shelves – even Aldi and Lidl have dipped their toes into the area’s less well known wines. Those previously obscure Rhônes are hitting the right note, thanks to their quality, élan and sheer value-for-money, reassuring us that overpriced claret isn’t the default mode when it comes to excellent French wine. 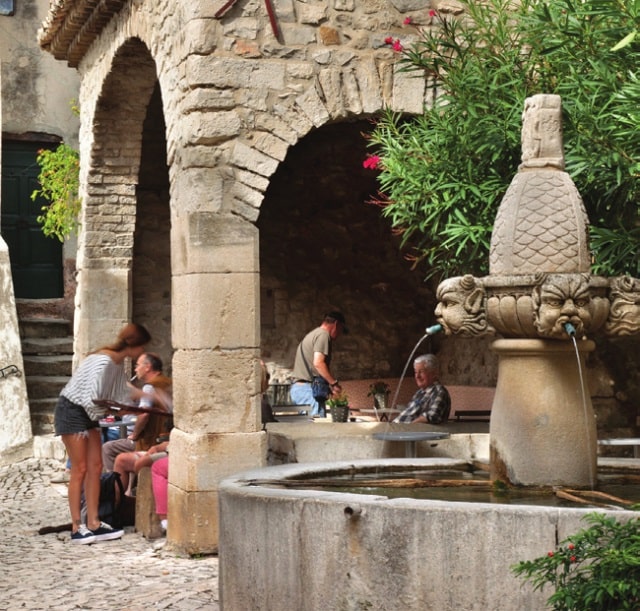 So you may know of the wines, but what about the villages – the terroirs – themselves? I’ve lived in the area, on and off, for many years. I’d travelled extensively through France, gîte-hopping each summer with the kids, from Brittany to the Auvergne, the Dordogne to the Lot. Then one day I crossed the Rhône into the Vaucluse region of northern Provence, and never looked back…

I bought a dilapidated apartment high in Cairanne’s medieval ramparts – no one else seemed to want it. Inside, it was pretty basic, but the al fresco bit  was sensational: the terrace looked out across rolling vineyards to the saw-toothed profile of the Dentelles de Montmirail and the looming, all-pervading presence of Mont Ventoux, the ‘Giant of Provence’. In many ways, Cairanne is typical of what you get from a Rhône Valley wine village. It isn’t flashy or faux-arty, and neither chic or precious. Instead, it’s honest and real. There aren’t any posh shops, just a village store that sells everything from croissants to clothes pegs. It’s the kind of place that rewards quiet exploration, with quirky nooks and crannies that draw you in and exceed  expectations. “What a charming little place,” you think, not quite sure why but very glad that you got to know it. 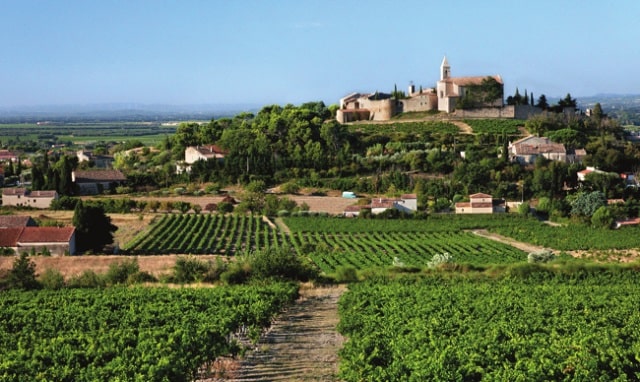 Like many French villages, Cairanne comes in two parts. There’s the fortified medieval hill settlement, which was almost abandoned after World War 2 due to lack of basic amenities but is now experiencing a renaissance, with an equitable balance of local French, American, British and German  inhabitants. Down below there’s the more modern village. You should, of course, concentrate on the former, though be sure to visit the wine co-op located in the latter.

Up above, bits of ancient wall, towers and fortified gateways encircle a sleepy central square presided over by a clock tower and campanile. It’s only when you dig a little that you discover Cairanne’s august historic pedigree: it was France’s first fortified village and founded in 1123 by the Knights Templar, the Christian military order identified by their red cross.

And did I mention the views? Cairanne is the Glastonbury Tor of Provence – an all-seeing sentinel poised on a hill that I think (I’m no geologist) may well mark the start of the Alps. Moving eastwards, low hills inflate into high, wooded ridges and big, bald mountain ranges, and by the time you get to Nyons (a mere 15 miles away) you’re into serious pre-Alpine territory, where snow chains are de rigueur in winter. 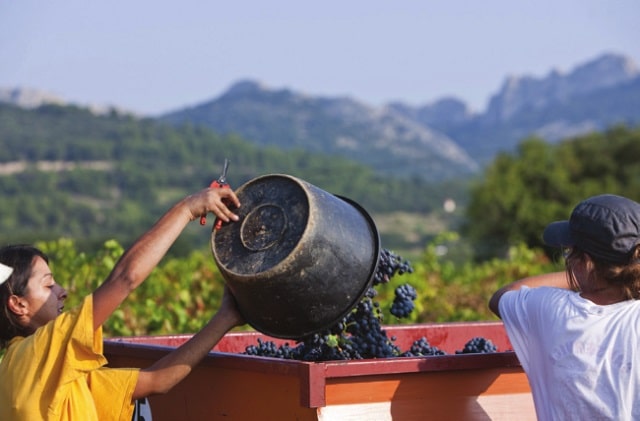 Like Cairanne, the higher you go the better it gets at neighbouring Rasteau. Set off from the large, shady Place d’Apparent, fired up with proper, spoon-melting, high-caffeine coffee from the sole café, which has been brewed to the same recipe since Maigret’s time, and you’ll end up in a maze of narrow streets leading to a 12th-century former bishop’s palace, a Romanesque church and a ruined château.

You can argue, if you really wish to, about the respective merits of the wines from Cairanne, Rasteau and Séguret, the village a few miles across the plain. But it’s the latter that wins, hands down, when it comes to looks.

Séguret is a Plus Beaux Village de France, and rightly so. It’s pure eye candy, a confection of honey and caramel-coloured houses stacked one on top of the other like a precarious toy town. Séguret’s terraces seem to have been crafted by artisans, into the steep slopes of the Dentelles de Montmirail, a strange, serrated range of hills formed by thrusting planes of gnarly, weathered limestone rock. It’s impossibly pretty, the nearest thing on this  particular wine villages tour to a conventional, guide-book ‘tourist attraction’.

Further along, just as the Dentelles are petering out into the vast Rhône plain, you’ll find Gigondas. Be warned: you’ll be tempted to spend an inordinate amount of time in Gigondas’ leafy square, which may well be the ultimate example in France. That isn’t just because of its soporific, shady ambience on a sultry summer’s day. Of all the wine villages, Gigondas makes the most of its viniculture – and the wine, in this case, complements the cultured, culinary pleasures of a long, languid lunch. That’s because in addition to the usual wine-cooperative, the village is peppered with small ‘caves’ (where, of course, degustation is encouraged) together with an exceptional choice of restaurants (see Essential Information, below left). Spend any  time here and you’ll discover why the Romans called the village Jucunditas, which means ‘A Happy Place’. 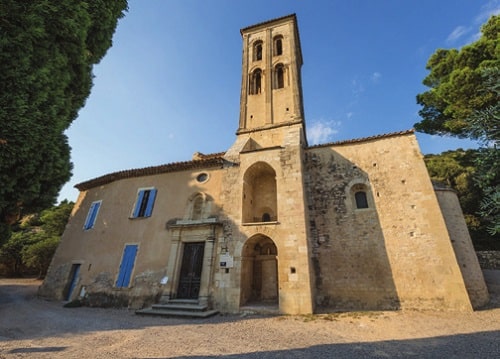 Finally, on to Beaumes de Venise, which is really more of town than a village, and a decidedly handsome one, again with its fill of fountains and gateways, ruins and religious sites. However, you’ll also need to venture half a mile or so out of town to see the pre-medieval Chapelle de Notre-Dame d’Aubune, which is topped by a tall, square Romanesque tower.

The town sits at the edge of the southern Dentelles and is the best starting point for walking and car tours of this remarkable range. Theoretically, they should be dwarfed by mighty Mont Ventoux. Yet their otherworldly, fiercely jagged profile – in complete contrast to Ventoux’s smooth, uniform mass – imparts a presence almost matching that of their enormous neighbour.

If you’ve had your fill of robust red Rhônes at that point, then Beaumes is the place to switch to white, or more accurately pale amber. Its local vineyards are famous for their dessert wine – “the best sweet muscat in France”, according to wine guru Hugh Johnson. So after the main feast, you now know how to end your Rhône uncorked trip on a high note.

Search for property for sale in Vaucluse >>>