Diary of a Barn Conversion in the Limousin – Part 10 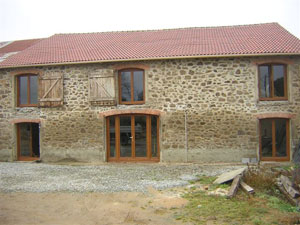 November and December have been really busy months both work wise and at the barn, so much progress has been made and we are finally starting to see a home emerge!

To begin with, even earlier than planned we had the doors and windows installed. The company were really quick, efficient and tidy and the whole building looks so different both inside and out. We’re really pleased with them and it makes a real difference now working inside without the wind whistling through. 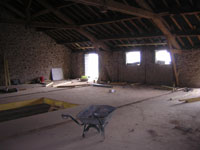 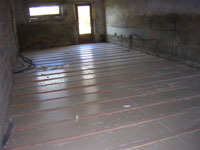 Work on the downstairs floor chevrons was finished in November which meant we could start laying as much of the electric cabling and water pipes at floor level as possible to keep the circuits short and simple. With this done we laid compressed polystyrene floor insulation between the chevrons. I have to say I am quite surprised at how effective this has already been. The difference in the floor temperature is pleasantly noticeable. Finally we were able to lay the chipboard flooring down which is already beginning to transform the look of the rooms. 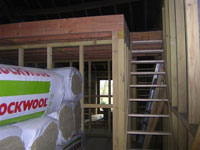 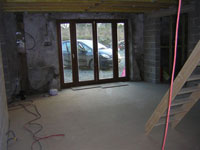 The builders have set into the stone walls and onto the block walls the joists for the loft area and the 3 mezzanine floors which will eventually become a dressing room for us and secret dens for each of the kids. Just when you think you’ve tidied up to a reasonable degree you get a whole new pile of stone to carry out by hand! Our mezzanine level is at a low level so constructing it was straight forward but the kids ones took a lot of thinking about as we need to maintain the space below for a bedroom and put their dens into the roof space. It is a large area but has caused issues with head height in certain areas. It took a bit of planning but it all came together and looks good as well as making great use of the roof space. We have put the chipboard flooring down and installed stairs too for the loft and the mezzanine levels so we can walk around the whole house now! 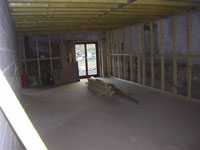 The builders have done most of the studwork now which is fantastic because even without the plasterboard you can see the rooms being divided up. I was a bit concerned that having got used to it all being so open it might feel a bit small with the space divided up but it really doesn’t, it still feels huge!

We have ordered our kitchen which I was very excited about. We’re still a little way off of being ready for it but we got a fantastic discount on the whole kitchen and appliances in the sale so it was too good to pass up!

Stu was more excited about a friend of ours, Mal, coming to stay for a few nights as he came armed with speaker cabling and other technical stuff that confuses me. Mal is very into all that audio visual stuff so we gave him a bit of a free reign on planning and installing all that would be needed for some flash tv that Stu has in mind along with other home cinema stuff. Not only that but he gave us some great ideas about lighting too!

We have finally taken the plunge over which heating system to have. We have opted for the air/air reversible heating system which doubles up as air con in the summer. It’s not particularly cheap but after a lot of research we’re happy that’ll it’ll be the right system for us so we’ve ordered it and will probably be ready for installation around February. 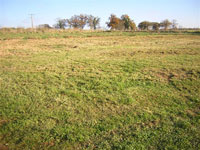 On sunny days we’ve even managed a little bit more work on the garden too and now at least have an area of very short grass that looks almost respectable!

It has been a good couple of months with some really noticeable progress. It isn’t always easy trying to juggle the build with other work and the kids but when you see this level of progress and all your ideas are finally taking shape it’s a real boost and makes it all worth while.