Bigger May Not Be Best in the French Alpine Property Market 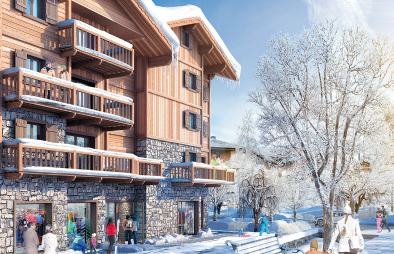 There’s a slight spring in the step on both sides of the English Channel this autumn, according to Richard Deans who heads the London-based UK sales office of MGM French Properties, the leading developer of second homes in the French Alps.

“The news for our economy and domestic property market is positive and in France – now out of recession – economic growth at 0.5 per cent is better than experts predicted,” says Richard. “The best summer for several years has helped to boost the feel-good factor, too.”

Whether this is just a blip or really is set to continue remains to be seen but Richard is cautiously optimistic about property sales in the coming ski season which will be heralded by the first snowfall in the French Alps within a matter of weeks.

Last month there was good news for the buyers of property in France when French President François Hollande announced the relaxation of his stance on capital gains. It means that, after 22 years of ownership of a second home, there will be no capital gains tax on the proceeds if it is sold.

Growing numbers of MGM’s British clients – who account for around 15 per cent of the company’s sales of around 300 apartments each year – are cash buyers.

Bricks-and-mortar second homes in traditional French mountain resorts attracting skiers, walkers and others who enjoy the year-round outdoor life are regarded by many as among the safest havens for their savings, particularly following the prediction by the new Bank of England governor Mark Carney that interest rates will stay at a rock-bottom 0.5 per cent until 2016.

In the past year MGM in the UK has seen a marked increase in the number of older purchasers – typically couples aged between 40 and 50 with children – happy to spend around £450,000 to £500,000 in cash to secure apartments in French ski resorts.

“Understandably, many want to buy the biggest property they can afford but that is not necessarily the best approach,” explains Richard.

“While Britons buying property traditionally think in terms of a four-bedroom house or a three-bedroom apartment, the French describe properties in terms of pièces or rooms in a property. No distinction is made between bedrooms and other rooms, although pièces exclude utility rooms, the kitchen and bathrooms.

“In my view, it makes sense to think this way when it comes to buying an apartment to accommodate a family in the French Alps because making the best use of the space is more important than counting the number of bedrooms.

The popularity of two-bedroom apartments means that most of the 55 leaseback properties for sale in MGM’s newest résidence de tourisme in Samoëns in the French Alps – Les Chalets de Laÿssia, shown in this computer-generated image and currently under construction – are this size. In this development, two-bedroom apartments are priced at between €259,000 for an apartment of 42 sq metres rising to €403,000 for one of 88 sq metres. Prices exclude VAT which is waived under the leaseback scheme

“All too often would-be buyers feel that they ought to have to have a third bedroom in case friends come to stay, forgetting that the way floor space is allocated in an MGM apartment means an unobtrusive fold-out bed in the living room makes for a comfortable night on the odd occasions when there are guests.

“What’s more, the way of life during a holiday in the French Alps is essentially outdoor, either on the ski slopes in winter or enjoying the countryside in summer. Our studies reveal that the amount of time owners actually spend inside their apartments is minimal.”

In the longer term an under-used third bedroom can become something of a financial burden as, when children grow up and find family holidays less appealing, their parents are left with a spare bedroom which, in a résidence de tourisme, incurs a higher annual service charge than they would face with a two-bedroom apartment.

Furthermore, the annual income for owners in a résidence de tourisme is maximised when two-bedroom apartments dominate those available to rent. Figures provided by CGH (La Compagnie de Gestion Hoteliere, the MGM Group company which handles lettings and management for owners) show that, at well over 60 per cent, the strongest demand from those wishing to rent a holiday home consistently is for two-bedroom apartments.

This month MGM has properties available to buy in around 30 mountain and lakeside locations at prices ranging from €196,488 to more than €1.5 million, depending on property size and location. Brand new developments planned or taking shape include L’Arbaron in Les Carroz, Les Chalets de Laÿssia in Samoëns, a new résidence in Chamonix and Chalet Kayla in Les Deux Alpes.

For more information about these and other properties available from MGM call 0207 4940706, email [email protected] or visit the website www.mgmfrenchproperties.com

Discover the Prestigious and Sought after Le Falcon Lodge