A new Club Med hotel which is competing for ski holiday bookings with a new MGM-built résidence de tourisme opening for business later this year is actually helping to generate apartment sales for the French Alpine developer.

“Club Med in Valmorel is successfully attracting both families and clients seeking five-star-luxury space,” says Richard Deans, head of MGM UK sales office in London, “but many of the Britons who fall in love with this little-known ski resort say they are keen to return and stay in a place of their own. That has prompted huge interest in our new résidence development, La Grange aux Fées, where we have now sold all but 40 of the 86 new apartments in the first phase. Plans for phase two are due to be announced very soon.” 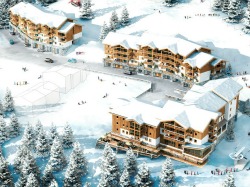 Valmorel, a two-hour drive from Geneva Airport, is a family-friendly pedestrianised village which is popular for holidays all year round. Built in the 1970s in the stone and timber style of a traditional Tyrolean village, it is located within the Grand Domaine area linking the Tarentaise with the Maurienne.

The village, located at a ‘snow sure’ altitude of 1,400 metres and reached by a scenic drive up through picturesque ancient villages and old orchards, is a ski resort which hitherto was little-known to Britons – but that is changing as MGM and Club Med promote its attractions in the UK.

Close to the centre of the village and occupying an elevated position with panoramic valley and mountain views alongside the chairlift, MGM’s new ski-in, ski-out residence has easy access to the resort’s 150km of pistes.

What makes Valmorel unusual is that, unlike so many other French ski resorts which opened their doors to countless developers during the building boom years of the past decade, the Mairie or town hall pledged to preserve the character of the village by turning down most applications for planning permission.

“Consequently, as the choice of properties available to buy is limited, prices will be forced up in the years ahead and that has to be good news for people who invest now,” says Richard. 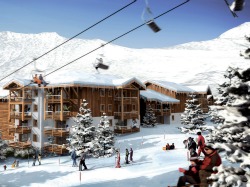 In MGM’s favour, when the Mairie considered its proposed plans, was its reputation as the leading developer in the French Alps – where it has been building ski properties for half a century – and its responsible approach to the environment.

The company–a founding member of Sustain Worldwide,a business alliance that drives profitable sustainability to the heart of global property development– frequently is invited by local authorities to build ski apartments on the basis of its track record elsewhere in the region.

The prices of the leaseback apartments still available to buy at La Grange aux Fées start at €192,000. They exclude French VAT at 19.6 per cent, waived under the leaseback scheme.

Every apartment comes with underground parking and cellar storage as well as use of locker rooms, a laundry and drying rooms. Four-star facilities include a fitness suite, gym, sauna, jacuzzi and steam rooms, as well as an OdesCimes spa with a variety of massages and treatments on offer.