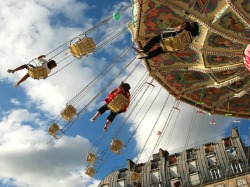 Au Pair Paris has a mission: to revive and renew the concept of ‘au pair’ for French families and their caregivers. Five years ago, two mothers from opposite sides of the Atlantic, Sylvie Confiac in Paris, and Susan Horton in New York created Au Pair Paris to match smart, caring young Anglophones with host families in the Paris metropolitan region.

The real story of its conception began many years earlier, when Sylvie, eager to discover America, became an au pair for Susan and her family in New York. They developed an enduring relationship and stayed in touch over the years as Sylvie returned to France and started a family of her own.

They eventually reunited and found they shared an interest and passion for reviving the classical idea of an au pair and the meaningful cultural exchange inherent in this union. They brainstormed, researched, planned and, in the fall of 2008 founded Au Pair Paris.

The organization is unique not only in its focus on Paris and the U.S., but also in its personal approach. Sylvie and Susan offer guidance and support to both families and au pairs beginning with the application/visa process and lasting throughout entire stay. Some families who approach Au Pair Paris simply want their children to learn English while others are drawn to an American lifestyle and encourage their au pair to impart his or her interests, knowledge and passions. It’s a two-way learning experience; more than one au pair has been astonished to discover that bread can exist in so many forms.

If there is a conflict between an au pair and her family, Susan and Sylvie offer support, encouragement and advice; the goal is for au pair and family to resolve the situation between themselves. But there are exceptions. A recent au pair was having a difficult time because her host family was too busy to spend time with her; she had arrived in France expecting to be immersed in French family life but instead found herself alone in her studio apartment when she wasn’t with the children. At the same time, another au pair was feeling confined; her family expected her to participate in all of their family activities; they didn’t consider it to be ‘work’ they just wanted her to be part of the family.

The solution? Susan and Sylvie had the au pairs switch families. All are now happily hosted, although before making the switch it was important to ascertain that the children – who always come first – would be comfortable with this change.

Au Pair candidates vary. Many are taking a gap year before, during or after college. Some have attended top colleges such as Columbia, University of Chicago or Stanford, while others are just finishing high school. They have come from most of the fifty states including Alaska and Hawaii.

If Susan and Sylvie are and indication, the bond and friendships that are formed between host families and au pairs are life-long lasting.