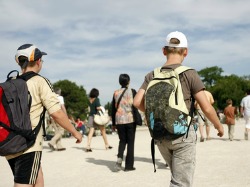 There’s something magical in the air in France each September – a renaissance after the August shut-down, a new beginning after long holidays on the coast and slow summer days at rural retreats. In the blink of an eye, life in France changes. Children go back to school, people return to work and the rhythm of day-to-day life resumes. This is la rentrée – with all the optimism and opportunity this time of year brings. Streets become busy once more, restaurants pull back the shutters to welcome back the crowds and a new calendar of cultural events begins.

The Anglo-Saxon world doesn’t have anything quite like it.

Of course, all over the Western world, there is the annual ritual of people returning to their normal lives at the end of the Summer – from school children, to office workers, to politicians – but this is simply a collection of unrelated events compared with the French phenomenon that is la rentrée. It’s a word we hear throughout August before it hits everyone with a bang in September.

The School Rentrée in France

The most visible rentrée takes place at schools, with most children going back to school on the same day. This event is preceded by weeks of advertising for pens, paper and other ‘must-have’ school equipment, plus the inevitable debate in the media about whether the government grants that help poorer families buy all this kit are actually high enough to cover the cost.

In Paris, the political rentrée begins when President Hollande comes back from holiday with a sun tan, and the Socialist Party holds its ‘summer university’, which is neither in the summer nor a university (it means a party conference) while the warring factions between and within all the major parties starting knocking lumps out of each other once more.

The Literary Rentrée in France

Then there is the literary rentrée. This is the time of year when France’s top writers (and translators in the case of foreign works) see their creations filling the bookstore shelves. From novels to works of philosophy, political tracts and history, they burst on the scene once the summer ends on 31 August. In 2015, for example, no fewer than  589 new novels were published at the rentrée.

Queen of the rentrée littéraire is novelist Amélie Nothomb, who has managed to write one rentrée book a year for the last decade and a half.

Not to be left out, the broadcast media also have their own form of rentrée. Regular listeners to the excellent France Inter will know that this is the time of year when its radio jingles get changed, shows move around or disappear and presenters swap programmes.

On TV, the leading TF1 news presenters finally make a return to our evening screens, sporting glowing skin that certainly isn’t the result of just a few snatched hours in a tanning salon.

One of the few aspects of French life that doesn’t have a rentrée is sport. The previous rugby and soccer seasons never quite seem to have ended before the new ones begin. That at least is reassuringly Anglo-Saxon…