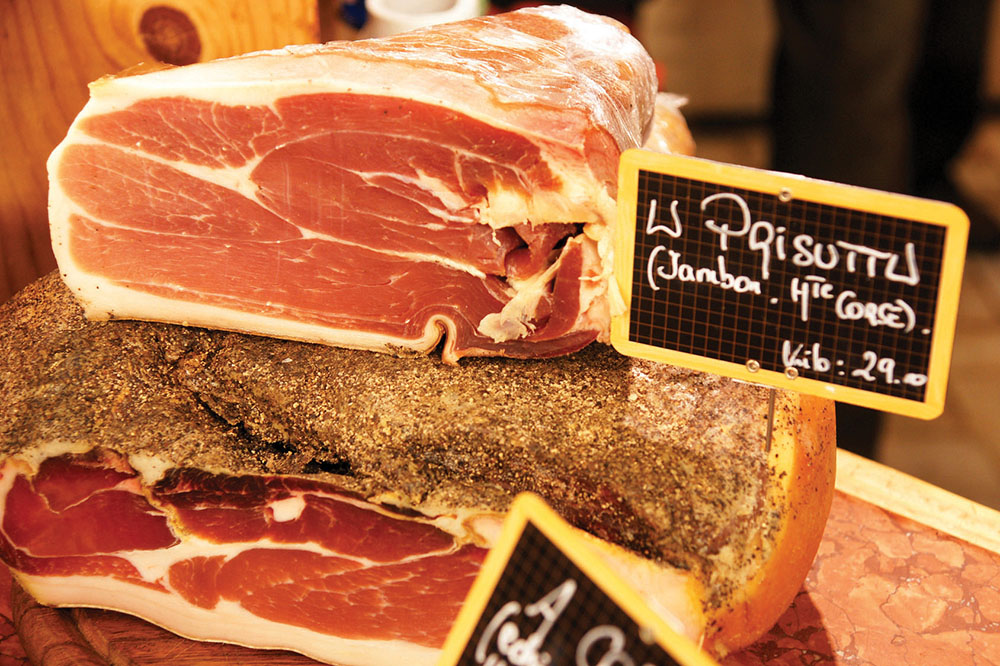 Corsican food, a stone’s throw from the heady Mediterranean delights of Italy, takes its cues as much from its rich terroir as the two mainlands that surround it. Corsica’s Mediterranean climate sun-ripens oodles of delicious vegetables, which locals then pair with aromatic herbs, smoked charcuterie, locally reared meats and Italian-influenced pasta and polenta.

The chestnut tree was introduced to the island during the early Renaissance period, under Genoese rule, and as a consequence many of today’s traditional specialities take chestnuts as their base. Customarily, the nuts are handpicked and dried over fire on a flat clay base, which has the dual function of smoking the charcuterie. After a month the nuts are ground into flour, which is then used to prepare polenta, chestnut tarts, pasta and beignets, bestowing each dish with its distinctively smoky flavour. Today, Corsican chestnut flour, or Farine de Châtaigne Corse, is a French AOC (‘Appellation d’Origine Contrôlée’) product.

Wild livestock
Corsica’s signature dish is perhaps civet de sanglier, a hearty wild boar casserole made with onions, carrots, fennel, red wine and (of course) chestnuts. Pork is very popular, too, due to the abundance of pigs on the island, and they’re transformed into cured hams, salamis  and sausages, as well as liver pâtés,  black pudding and fromage de tête – a brawn made from their brains.

The Corsican pig is unique as it’s been crossbred with wild boar. It’s reared partially in the wild, watched over by a shepherd and they feed mainly on chestnuts, which they spend their days rootling out, plus kitchen scraps and apples. This diet and active routine gives their meat a particular flavour and texture, and Corsican pork products also reflect Italian traditions, including prosciutto and pancetta.

Another speciality is veal, which in Corsica is both corn- and grass-fed, giving its meat a slightly darker colour and richer taste. It’s commonly eaten in a slow-cooked stew of olives, tomatoes, onions and herbs. Slow-roasted lamb, fragrant with whole garlic cloves and fresh rosemary, is also a frequent restaurant dish.

Cheese & sweets
Fromage, made exclusively from ewe and goat’s milk, is a Corsican staple. The most significant is brocciu – an AOC-certified whey cheese similar to ricotta. It’s often served in stuffed pasta or vegetables, such as aubergine, courgette and artichoke, as well as in traditional desserts. Falculelle are small cakes made from brocciu, sugar, flour and egg yolk, oven-baked on a chestnut leaf, while fiadone is a kind of cheesecake flavoured with lemon zest.

Local tipples come in the form of wines fermented from hand-harvested grapes – fortified Muscat wines or the herb-infused Cap Corse, both drunk as aperitifs – and amber beer brewed from a combination of malt and chestnut flour. Homemade aperitifs, often flavoured with herbs such as myrtle and basil, are frequently bottled and sold on roadsides, offering up the soul of the island’s cuisine to passers-by.