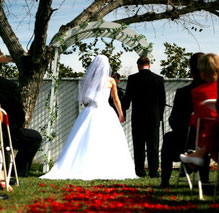 Foreign nationals getting married in France

The civil ceremony takes place in the town in which one of the parties to be married has resided for at least 40 consecutive days immediately preceding the marriage. In certain circumstances, such as the couple living in different towns or moving to another town, they can make a marriage application to the Mairie of the other town.

The civil ceremony will be conducted in French and all legal documents including the marriage certificate will be issued in French. For those wanting the ceremony translated into English, the maire can advise on making the necessary arrangements.

The civil ceremony takes place at the mairie and applications for the marriage, otherwise known as the marriage banns, must be published at the mairie 10 days prior to the civil marriage. (The mairie will provide an explanatory written guide of the documents required). Most mairies take approximately 4–6 weeks to process an application. It is advised to meet with them in order to determine their exact documentary requirements (documents may need to be issued 3 months prior to the date of marriage or publication of banns).

The ceremony is performed by a French civil authority (maire, adjoint, or conseiller municipal). At least two and at most four witnesses should be present.

The witnesses must be chosen in advance and can be of any nationality, providing that they know enough French to understand the proceedings without a translator. They will also need to provide proof of identification. These factors are very important.

During the service, the maire reads aloud sections of the civil code enjoining the couple to be committed to each other and share an equal role throughout the marriage.

Guests can attend the ceremony but how many depends on the facilities of the mairie. The marriage ceremony will last about half an hour.

After the ceremony confetti can be thrown over the bride and groom and photographs taken outside.

The wedding party can then proceed to a reception, perhaps at a hotel or alternative venue.

A marriage certificate (livret de famille) will be issued after the ceremony. This is an official document to be used for all future family events, such as births, deaths, divorce or name changes.

If you would like to obtain further copies of the marriage certificate you will need to write to the mairie where the marriage took place (state the date and place of your marriage, plus your full names, including maiden name).

All documentation must be original. Any documentation that is not in French must be accompanied by official translations translated by a Traducteur Assermenté. The following documents are usually required:

Majestic Wine, Calais Prices, just a hop across the Channel!

Discover the perfect wines for your wedding, at prices unseen north of La Manche. Come to Majestic Wine Calais and save up to 50% on your favourite Majestic tipple.

We’ll even pay for your travel*!