It Pays to live in the Loire 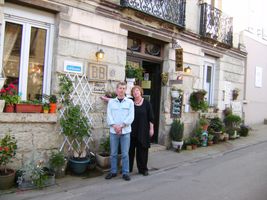 Childhood dream of opening a teashop

It was the summer of 2005.
My husband, Tony, and I were somewhat disillusioned with England (commuting to London, the competitiveness of life and more) and wanted very much to do something different with our lives.
We also still had a mortgage and were approaching the dreaded middle age.
Ever since my teens I had wanted to open a tearoom and so I persuaded my family to take a chance, sell our house in Tunbridge Wells and rent in France on a search for a property that might be suitable for such a venture.

Some of our friends cautioned against such a move, but in the final analysis we decided that if we did not seek to realise our dreams as we approached the middle and final stages of our lives then when would we do it.
Better to try whilst we still had stamina and vision.

We chose France largely because we had enjoyed some happy holidays here in the past and also, bearing in mind that we wanted to replicate an English style tearoom serving creams and jams and selling a few other products such as select teas not to mention PG Tips and Typhoo, close proximity to Angeleterre was an incentive.

Over the next month we rented our friend Fiona Brown’s cottage in St. Jean de Villenard, near Ploermel in Brittany using it as a base and travelling thousands of miles across France from Brittany to the Limousine to the Languedoc.

Some of the properties we viewed were so dreadful that the descriptions by the estate agents should really have been exposed under the ‘Trades Descriptions Act’.
We had originally had the idea that we wanted to be 15 minutes either side from the sea and the mountains and, in fact, we did very nearly buy one that was exactly that near Beziers.

The property at 6, Avenue Rochechouart was actually the very last building we were scheduled to see during our first search and, being in the Loire Valley, we were not at all certain if this is where we wanted to live.

What did attract us was the fact that the house was next to an ancient abbey of Fontevraud where we knew the links between France and England were historically very strong.
It also made good business sense to think of positioning our prospective business next to an historical monument, as we knew that we;
a) wanted to be part of culturally vibrant community where tourists would visit and,
b) somewhere that appealed to our more romantic sense of history, myth and legend.

It was a bitterly cold December afternoon when we drove to Fontevraud and discovered this most amazing house.
Built in 1865 of creamy Tuffeau stone with ornate carvings and arranged over four floors with a beautifully ornate spiral staircase, it has retained lots of original features including stone fire-places, oak beams and a splendid dining room.

It also had a salon (the house had been, at one point, a creperie) that would be perfect for what we now describe as our Salon de Thé and where we now also sell arts and crafts, English groceries, health foods, books, bric-a-brac and gifts.

With enough accommodation to run a chambre d’hôtes and for us to live comfortably, it had the added bonus of a roof terrace with panoramic views of the abbey and of the forest and vineyards that skirt the village.

We fell in love instantly with both the house and the abbey, plus there even seemed to be tourists walking about on this cold winter’s day.
The house was a little pricier then we had budgeted for, but we put in an offer there and then and we have not regretted making the bigger investment.

We moved in March 2006.
Acquisitions included some rather wonderful tapestries we bought on a budget from Brocantes and the fantastic Emmaüs and Aspire projects —charities that earn money by running thrift stores — plus ‘high street’ stores such as Conforama and But.

The house, for its age, was in surprisingly good order and the only thing we have really had to do is create an en-suite for the first-floor guest room.
We had enormous difficulty finding a plumber to do the work.
In fact, we never did find one who was available when we needed him so we ‘took the plunge’ and did the work ourselves.
As none of our visitors has complained yet, we can only assume we’ve done a reasonable job.

Now, two years later, we feel very much a part of the community here in Fontevraud.
We have made some wonderful friends from a diversity of backgrounds including French, German, Dutch, American, and of course English. Our business will probably not make us a fortune, but we have lovely customers who visit our tearoom and guests from all over the world who stay in our Chambres, Flora and Rose.
Some of them return time after time and every day that we walk out onto our terrace and view the breathtaking view of the abbey and its surroundings, we know that we made the right decision to move here.

One of our customers from the Czech Republic described his experience at Chez Teresa as ‘a taste of English heaven’ others have described our cakes as ‘sublime’ and the atmosphere of our shop like the old English corner shop of yesteryear.

Recently, we have hosted a series of ‘end of term’ tea-parties for French ladies who are learning English and last week one of them described our dining room as ‘like a film set’, so this definitely brought a smile to our faces.

Coming from a 24/7 culture, we sometimes get frustrated that the ‘Bricolage’ store closes for a two and half hour lunch breaks – especially when you are doing up a property, as we were in the beginning.
However, on balance, we love the sense of ‘joie de vivre’ that is part of living in France, and for the time being at least, we ‘would not swap it for the world…. ‘