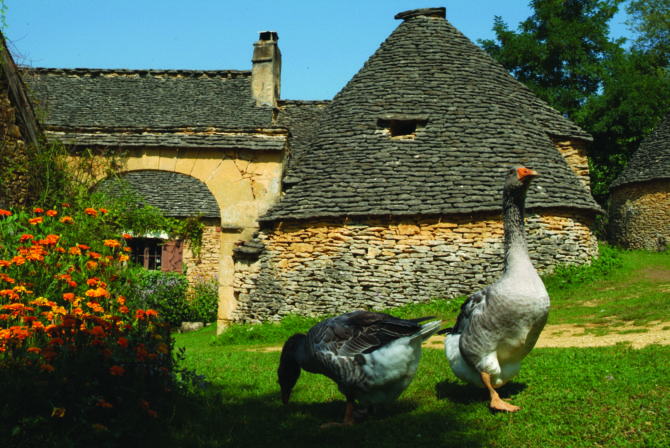 For anyone familiar with the lush Dordogne Valley, the UNESCO World Heritage town of Sarlat-la-Canéda will conjure up a host of picture-perfect images: chocolate-box medieval streets, bustling street stalls and a covered food market in the ancient Sainte-Marie de Sarlat church, concealed behind the most enormous wooden doors you’ve ever seen.

The region also celebrates a significant gastronomic heritage, with its famous Périgord walnuts and truffes noires glamourising the menus of each street-corner bistrot. Most of all, it’s the capital of duck and goose-based produce – samples of rillettes, duck saucisson and various pâtés can be sampled at each market stall. For me, following a shamefully gluttonous weekend visiting the town’s fifth annual goose festival, Sarlat en Périgord Fest’Oie, the word ‘Sarlat’ will forever be synonymous with foie gras.

Sarlat is a gorgeous town, even when it’s submerged under a misty haze of February drizzle. Pedestrianised cobbled streets weave between 14th-century sandstone townhouses, whose yellow-gold hue seems to glow only brighter beneath a grey sky. Off-season, there’s a muted charm about Sarlat – the town’s deserted passageways and squares take on an atmospheric romance which can easily be suffocated by hordes of mid-summer sightseers. Presided over by a robust Romanesque cathedral, Saint-Sacerdos de Sarlat, and the mysterious Lanterne des Morts (Lantern of the Dead), a 12th-century tower, a winter visit to Sarlat allows the town’s historical weight to sink in.

Temporarily free of its tourist town branding, it hums with the activity of any rural French community. The food market still flourishes, yet it caters for local chefs and families, and the town’s landmarks are all the more striking for some breathing space. 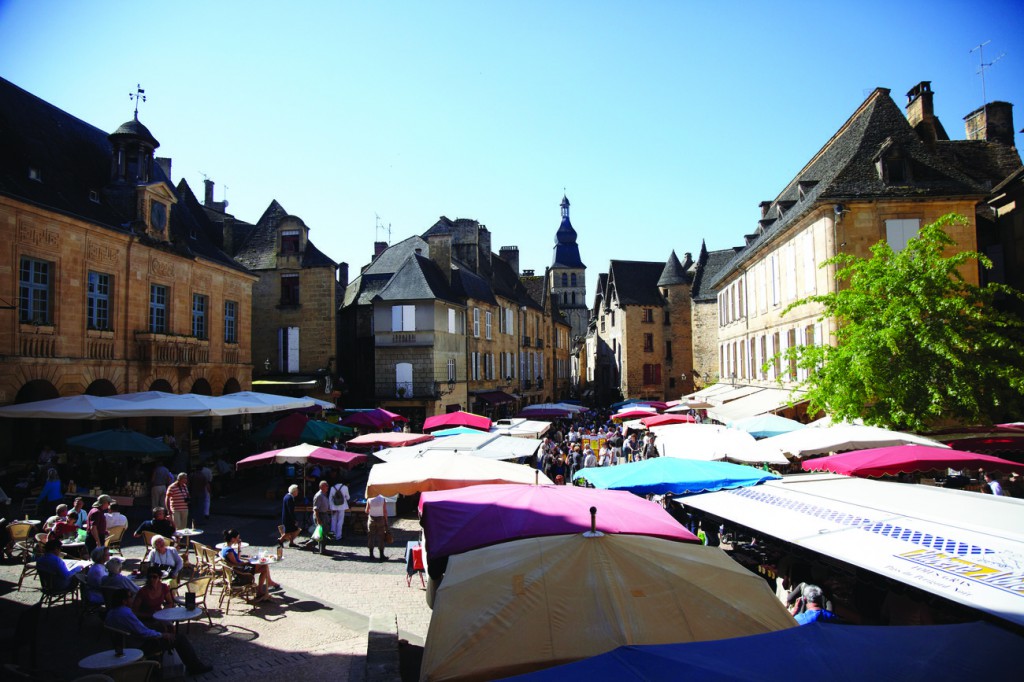 I spend a beguiling morning on a guided tour spanning the history of Sarlat, from the cathedral’s monument to Joan of Arc to the Cour André Malraux, a modest medieval courtyard that unexpectedly emerges from a warren of stone streets. Its name pays homage to President de Gaulle’s Minister of Cultural Affairs, who single-handedly saved the settlement from crumbling into disarray with a major cash injection that allowed its restoration in 1962. The tour finishes at the central marketplace, where a bronze figure dubbed Le Badaud (The Onlooker) sits atop a stone wall, silently observing the comings and goings.

My innocent browsing is interrupted by a truffle farmer who enthusiastically shoves me in the direction of a glass tank that houses – or so he tries to convince me – the world’s largest Périgord truffe noire, which has been preserved there in brine for almost two years. It doesn’t look particularly appetising. Happily, the farmer takes a liking to me and hurriedly smuggles me a smaller, fresher truffle when his wife is looking the other way, inconspicuously wrapped in a tissue.

Another delectable regional speciality is the Périgord walnut and I defy anyone to resist a Périgourdin gâteau aux noix, where the batter is combined with whipped egg white, giving it a meringue-like airiness which is lightly balanced by the earthy flavour of walnut when baked. Traditionally served with a sweet crème anglaise, it’s heaven on a plate.

Then there’s the foie gras. Local goose farmers from all over the region congregate at Sarlat’s market to showcase their produce – the selection and sheer quantity of the stuff is overwhelming. Sometimes blended with salt and pepper into a smooth, creamy paste, or simply left entier, as a block of goose liver in a jar, this is the Dordogne’s speciality and it takes centre stage at Fest’Oie. And so begins my initiation into the production and consumption of foie gras…

Over the course of a short afternoon, I am to indulge in a truly delicious casse-croûte (snack) lunch, consisting simply of rustic bread and foie gras; visit the Elevage d’Oies du Pech goose farm in nearby Paulin, to discover the disputed practise of gavage, or force-feeding; and observe a cookery class using foie gras as the principal ingredient for two regional dishes. After the class, we’re presented with a complimentary tray of – you’ve guessed it – foie gras, plus the usual glass of sweet Monbazillac dessert wine, which I’m told is the only accompaniment to adequately complement the dish.

Though what began as an indulgent treat was nearing obscene decadence by the end of my stay, I couldn’t tire of the immense sense of pride conveyed by the producers of this national delicacy as they introduced us to their trade. France is fiercely defensive of such quintessential industries – visiting these family-run farms, I began to understand the real importance of holding onto gastronomic tradition and supporting regional manufacturers.

Nonetheless, my British perspective found this difficult to reconcile with the rather brutal practise of force-feeding. Although I was pleased to find that the geese of the Elevage d’Oies du Pech spend their first six months ‘free-range’, with the run of a huge field, my stomach drops when I’m invited to observe how the last three to four weeks of their short lives pans out – force fed four times a day in the ‘gavage’ barn.

However, it wasn’t as traumatic as I’d feared. Yes, it’s uncomfortable to watch, and the geese clearly don’t enjoy the procedure, despite the farmer’s unyielding assertions that they do. But the feeding tube doesn’t seem to cause physical pain and the process takes only a matter of seconds. Though I’m grateful for this, the practise still doesn’t sit right with me. It’s the bigger picture which reveals the true cruelty of gavage: the unnatural swelling of the liver to up to 12 times its natural size can cause liver disease and haemorrhaging, so that the geese are too fragile to even be transported for slaughter. Needless to say, my appetite for goose liver has somewhat dwindled by the time our farmer whips out yet another tray of foie gras to be sampled – it’s just a glass of Monbazillac for me.

Any lingering aversion to eating goose is quickly put aside as we return to Sarlat for the evening’s festivities, La Soirée Bodég’Oie, a street party that sees the town’s citizens gearing up for the main festival, which commences the next morning. We jostle in line for our next dose of goose, to the energetic sounds of local brass ensemble, Bandazik, who churn out unlikely, crazed versions of club hits.

Munching on a slap-up, rustic meal of goose drumstick, salade Périgourdine and potatoes sautéed to crisp perfection in goose fat and garlic, the festivities also provide a taste of a rural village festival. Local Bergerac reds flow freely and couples defy the crisp evening air that’s setting in by dancing on the cobbles late into the night. 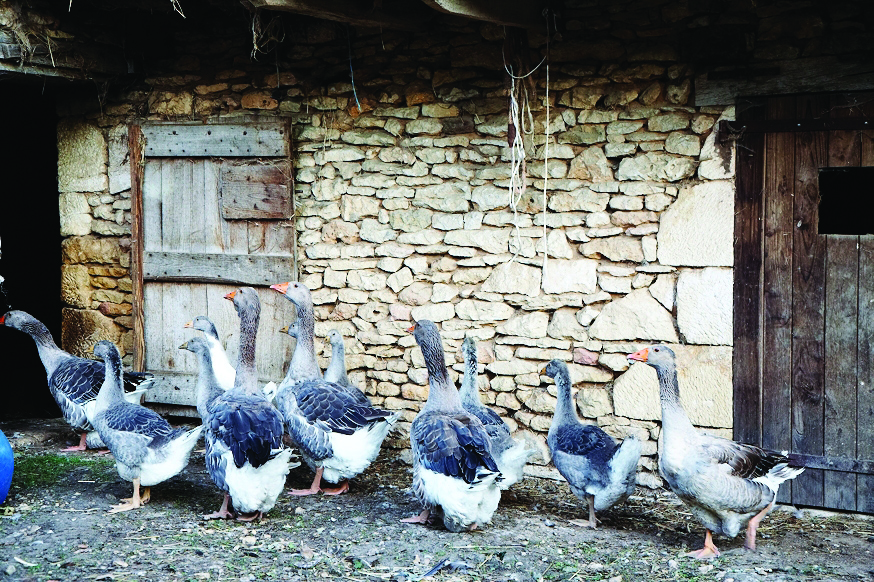 Before I know it, the morning sun is creeping through my hotel curtains, telling me that it’s time for the main event. I wander into the centre of Sarlat to discover that it’s been overrun by 200 geese, who march in pairs between market stalls which display nothing but produce made from their relatives: rillettes, foie gras and confits. But it doesn’t end there: street vendors are cooking up a traditional goose stock soup, calligraphy artists are painting eggs and anecdotal afternoon tours describe the key role that the bird has played in the town’s gastronomic identity. But I can’t stay browsing for long as I’ve been invited to attend a traditional feast at the Centre Culturel et de Congrès, which is rumoured to be the jewel in the crown of the Fest’Oie.

Battling through the crowds of locals who are keen to secure a seat at the repas traditionnel, we enter a huge concert hall where long lines of tables have been festively set out – their red surfaces laden with countless bottles of wine and baskets of fresh, crusty bread. Taking our seats and supping a divine aperitif à la noix, a regional walnut liqueur, we await the feast.

One by one, some 15 courses tout à l’oie – entirely made of goose – relentlessly appear, carried out on trays by waitresses moving in single file. There’s a country and western band playing on stage, exuberantly welcoming the arrival of each dish.

Every possible method of preparing the meat is covered, from goose sausage and carpaccio, to confit and stuffed breast – plus, of course, a constant supply of foie gras, lest we forget the star of the show. Even the salad course is peppered with fried goose gizzards! Each course is balanced by beautifully complementary wines, whose freshness effortlessly cuts through the richness of the dark goose meat – an occasional trou périgourdin palate cleanser is thrown in too. The last three courses are desserts – a sumptuous Périgourdin gâteau aux noix taking its rightful place centre-stage. 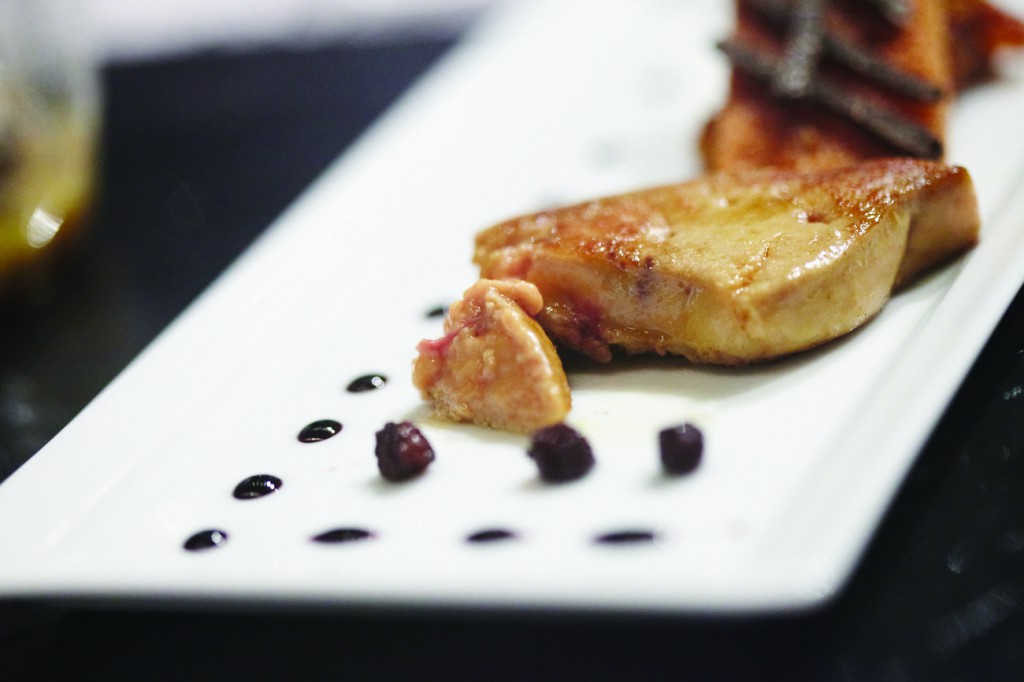 The feast is a riot. In between courses, guests leap up from their seats to grab a partner and twirl them around on the dancefloor. People sing along with the band wholeheartedly and cheer on the chefs who are proudly displaying their culinary creations. Spirits are so high that I can’t help but be swept along – before I know it I’m waving my napkin above my head, belting out a hopelessly Franglais version of whatever traditional song is playing, and having a blast. I’m reluctant to leave early to catch my flight home, convinced that the locals will be there for hours to come, dancing the afternoon away in joyous celebration of the region’s gastronomic heritage.

To spend a weekend at the Fest’Oie is to step through the looking glass into rural Dordogne, where local life revolves around a rich culture of celebrating life’s simple pleasures: good food and wine, shared with your loved ones. It’s a unique, highly entertaining event, and the warmth shown by the people of Sarlat is endearing. Any lovers of French cuisine will be in foie gras heaven, and even if you’re not much of a goose fan, the town’s architectural charm and authentic identity will capture your heart. Why not don your dancing shoes and pay Fest’Oie a visit in March 2015?

Find out more about the culinary specialities of Dordogne

How to cook black truffles and foie gras