Les Saisons – The clearly defined seasons of the Limousin

Living here, in rural France, I have learned to follow the seasons. Here they are very clearly marked by the temperature, the rainfall – or snow -, the food available, and generally the activities one can practise.

In big towns, and generally in Britain, one gets the idea that all year round you can eat the same food, practise the same sports, and wear practically the same clothes.

Here in Limousin, I learned to shop for food in season. It does not occur to me, even nowadays to buy tomatoes in winter, when the ones grown out of doors, not under glass, and picked in the morning before the gardeners bring them into town to sell are cheap and so much tastier. 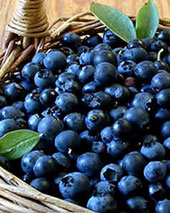 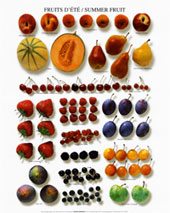 We eat local strawberries from the strawberry capital that Beaulieu sur Dordogne in the south of Corrèze has become in May, cherries a little later, peaches and apricots in summer. Melons are now plentiful from June onwards, but in the sixties you couldn’t get a good melon until late August. Grapes follow on in September, and we keep apples and pears for Autumn.

Hurry to make the most of asparagus, for once May is over they are practically out of season. I always ask the man on the local stall if the Cantal or the Saint Nectaire farm cheese is worth eating, (they can be bought all year round, but there is a high season for proper cheese also), and it is quite acceptable to ask to taste anything you want.

It is fascinating to watch French women buying meat in a butcher’s shop: no “take it or leave it” attitude here – they carefully pick the piece they want, supervise the cutting of it, have it prepared for the dish they intend to make, and generally ask for advice about the time necessary for it to be perfectly cooked. Neither butcher nor customer waiting in line ever begrudges the time spent.

The shops are usually a great pleasure to the eye, beautifully laid out, most butcher’s shops also being charcuteries where their home-made patés, hams and saucissons are on display to tempt the smallest appetite. So housewives on a small budget prefer not to send a gourmand husband to shop!

The different seasons not only offer different foods for sale, they also provide free crops in the woodland and fields. Truffles are the chasse gardée of the professionals, and in Limousin are only found in the south. October brings the chestnut season, and here there are still plenty of chestnut trees, where it used to be a staple food in past centuries, replacing the cereals that grow with difficulty on this land and in this climate, apart from rye and buckwheat. On the market the country women still bring châtaignes blanchies for sale – sweet chestnuts which have been peeled and are ready for cooking – in case you find it too much trouble to prepare those that are there for the picking along all the tree-lined lanes of Corrèze.

Bilberries – the whimberries of my native Lancashire – are also plentiful, and you can gather wild raspberries and blackberries by the basketful. Walnuts, which the owners hardly consider worth while gathering, because of the low price fetched on the market, are also there for the picking. The pleasure of roaming the countryside, which here is open to the walker, and finding something for nothing, is a pastime one never tires of in Corrèze.

The buckwheat that grows on the poor soil of high Corrèze was also a staple food in years gone by, and the tourtous buckwheat pancakes have made a real comeback in recent years. Many shops sell them, and restaurants with an eye to folklore, propose them stuffed with veal sweetbreads in creamy mushroom sauce. Local recipes are well worth trying. Tourtous in Correze, they become bourniols in Cantal, and have different names in other regions of the Massif Central.

Local gastronomy, although sometimes ignored or looked down upon by the famous chefs in other regions, is a delight to be savoured by any visitor; salads based on duck or the local raw cured ham, the mushrooms gathered here, and the delicious meat raised in the wide pastures all over Limousin – beef and veal that has rarely seen the inside of a cowshed, the local breed of tender lamb, chicken and other poultry, including the duck or goose preserved in its fat, that has eaten nothing but Indian corn. And yet in spite of this fatty sounding diet, the “French exception “ applies to Limousin.

The most important foodstuff found free in the woods of Corrèze is without any doubt the mushroom, and especially the cèpe, which is famous throughout the country. Today I crept out just after breakfast to visit the nearby wood which no-one else in the village seems to know about, because I can find the precious fungus there when the other neighbouring forests look as though a herd of elephants has been storming through them.

You have to be very friendly with a French person to be told where the edible mushrooms grow in his region; we lived for fourteen years in Cantal and was only once taken to a likely place – we finished up by finding one ourselves, at the end of the fourteenth year.

The cèpe mushroom is by far the favourite in this department, in fact the word champignon (the French word for mushroom, and even for toadstool to the English) is used only for the cèpe here. People will say “Oh, yes, I found some “girolles” (chanterelles) or some rosés (field mushrooms) but no champignons.

Most people just pick enough for their own use, to eat fresh, bottle or freeze, but country dwellers can make quite a lot of money out of the crop. Parisians are sometimes prepared to pay up to 200 francs (approximately 30 euros) a kilo, and Italians are also very fond of our Limousin cèpes. It takes a long time to become a good mushroom picker, but I think that after 40 years I have at last passed the test.

I can now guess in what wood they are likely to grow, under which trees, in what weather – damp enough, hot enough – and I even consult the calendar to find out when the phase of the moon is favourable. (My scientist husband has just looked at our Post Office calendar and groaned that we shall be away from home when it is the new moon, so shall miss the new crop.)

Take an inhabitant of Corrèze out for a drive and he will admire the landscapes of his native countryside, but is far more likely to exclaim about the rivers where he could doubtless catch trout, and he will certainly say “Now, that must be a good mushroom wood!”

But there are many unwritten rules to respect for the good hunter of wild mushrooms. Here are some of them. First, if you have taken your car, you park it in a hidden spot so that nobody on the road can see it and guess your intentions. Secondly, if you have to leave it on the lane, you put it on the opposite side to the one you intend to explore, get out quickly and don your wellies as discreetly as possible. If by any chance another car comes along before you can hide under the greenery, you must pretend that your walking stick is there only to help your old bones, and that the wellies are the most comfortable footwear for your stroll along the lane, your basket or your bag being there only to contain the essential snack in case you feel faint before the next hearty meal. If you have time before the occupants of the car notice you, you swivel promptly around and pretend that you are going in the opposite direction from the one you are meaning to take.

Once in the shelter of the forest, you no longer speak, but communicate with your companions by gestures, and, if it is absolutely essential to call to them, you imitate some wild creature, preferably not an owl in the middle of the afternoon, for obvious reasons, and certainly not the grunting of a wild boar once the shooting season has opened.

You try not to tread on dry sticks, and you must examine every likely mushroom carefully before picking it; no-one must guess that the toadstools have been seen and looked at, thus revealing the fact that the wood has been visited. Future walkers must imagine that there are no edible ones in that particular spot, as no-one has disturbed the inedible ones in their quest. Likewise, you cover up your tracks when you have picked one; carefully replace the moss, smooth the grass and scatter the twigs, and if that is impossible, you enlarge the holes until they resemble the traces of wild boar looking for roots . . . 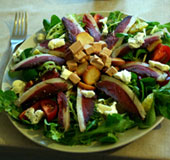 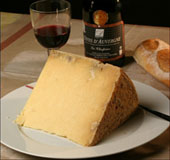 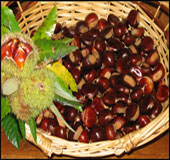 If, unfortunately, you meet up with another hunter who is being just as discreet as you are, you nonchalantly conceal your finds behind your back and exchange the time of day – essential in the country – and lament, shrugging your shoulders in the traditional Gallic fashion, “Oh, there’s nothing much in this neck of the woods, is there? They haven’t really sprung up here yet, have they?”, which gives you both the opportunity of performing an elegant pas de deux whilst you strive to see just how many he has in his bag. [Remember that some mushrooms are toxic to humans. Never eat hand-picked mushrooms without checking with an expert or your local pharmacist first].

When you arrive home with your crop, after avoiding the nasty branches that spring perfidiously into your face while you are walking with your eyes glued to the ground, after running from the wasps whose nest you have ruined thinking it was a rabbit hole, after crawling on all fours under the brambles to check that the hump in the moss is not an enormous cèpe lurking secretly out of sight, you can proudly cook them for family and guests, often to find that a whole afternoon’s quest has resulted in just enough to flavour a very small omelette. But you have not wasted your time, because, if it is not always a profitable business, mushrooming is certainly very good exercise, and you have taken in what the French call un bon bol d’air.

In memory of Kathleen Fourches (neé Rathbone) 1936-2011. Kathleen was a writer and long-time resident of the Limousin, and a regular contributor to FrenchEntrée.