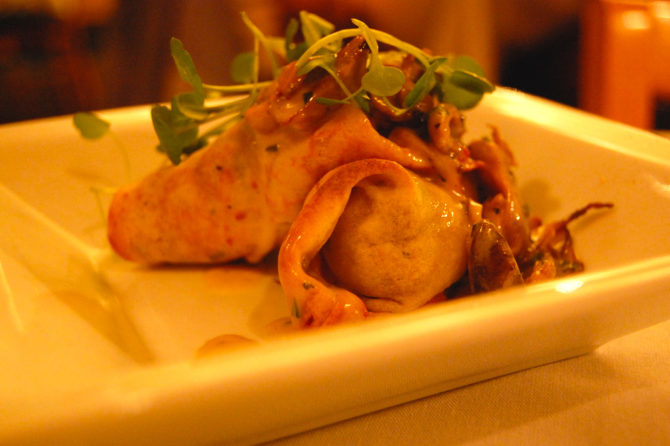 Sieve the flour into a large bowl. Make a well in the centre and add eggs and salt. Mix well. Whisk in milk and water. Add oil and leave to stand, at room temperature, for at least an hour.

In my experience, Normans and Bretons generally tend to disagree on two main things… Who really owns Le Mont St.Michel – Normandy or Brittany ? – and who makes the best galettes?
I’ve spent many an evening in my adopted (Breton) brother’s house, Allain, indulging in his wonderful galettes, which he painstakingly cooks over the open fire. Tout va bien until Cécile, his (Norman) wife joins in and the fun starts! The ambience is clearly on the house as they argue over how to produce the best galettes. Despite the fact that I feel very much a part of Allain’s family, even I can’t get his recipe from him. So, I’ll give you what I’ve come up with and hope it suffices!

Make as for savoury crêpes, adding the calvados at the end. And after all that beating the batter needs a good rest so, leave it for 24 hours.

I like to prepare my crêpes/galettes in advance, leaving one side slightly less-well cooked that the other. I prepare my fillings: chopped ham, grated cheese, smoked salmon etc. Then, place a galette (less cooked-side down) on a preheated pan (with some melted butter) and garnish with ham and cheese, for example or smoked salmon. You may be feeling adventurous and break an egg over the galette and let it cook with the ham and cheese. Once garnished, fold, reheat gently and serve immediately. However, some cook the galettes completely, leave to cool, brush with melted butter, garnish, fold and reheat in a preheated oven (200°C) for about 6 minutes.. The advantage here is that they can be prepared in advance, reheated and everyone eats at the same time!

Some ideas for fillings… (for 4 galettes)

Try some andouillette and apple sauce for a real Norman galette

Gently sauté the white part of leeks (sliced thinly) in butter in a pan (with lid on) for 15 minutes
Add some crème frâiche and mix well
Place on galettes with a little chopped ham.

Melt a little butter in a pan
Add onion and sauté for 5 mins
Add mushrooms and garlic and continue cooking until mushrooms are cooked
Throw in the parsley
Spread the rest of melted butter on the galettes
Add the mushroom mix and a tsp of cream
Fold the outer parts of the galette into the centre, forming a square
Reheat in a preheated oven(200°C) for six minutes

Melt butter in a pan
Add apples and cook over a high heat
Add sugar and mix until dissolved
Add crème fraîche
Garnish the crêpes
Heat the calvados
Pour over the crêpes and light a match to it!

And what does one drink with these specialities?

Cider, traditionally, in cups that also, traditionally, were never washed – everyone had their own little cider cup! You’ll still find them today in ‘épiceries fines’, they’re usually an off-white colour with a red line under the rim). However, today, as fillings are often of varying flavours, a light red wine, a fruity white or a nice rosé does the job too!