First published: 21st May 2018 by FrenchEntrée 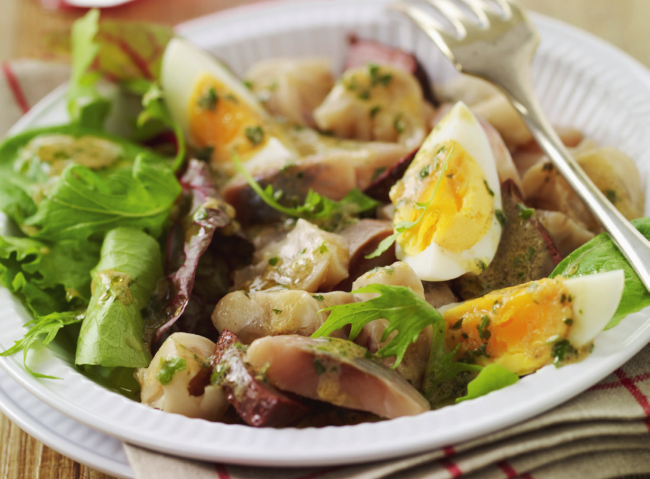 This first-course salad is a marriage of diverse ingredients associated with the area around Lyon. It is found almost everywhere, from the smallest bouchon (a Lyonnais-style bistro which tends to specialize in meat) to the grandest of establishments. You could even say it is part of the Lyonnais way of life.

Traditionally, the salad is composed of lamb’s or sheep’s trotters (locally called clapotons), chicken livers, eggs and picked herrings. (Nowadays, you might find that pig’s trotters sometimes replace the sheep variety.) In the past, sheep’s trotters were also served in a similar salad, along with sheep’s testicles, but the dish has become increasingly rare – along with the rarity of this type of offal in general.

✽ Cut the trotters into dice; set aside in a large salad bowl or mixing bowl.

✽ Trim the cleaned chicken livers free of stringy white membrane and sinew. Slice through each one horizontally, opening it out like a book, then cutting all the way through so that each liver yields two flattish pieces. Heat one tablespoon of the oil in a frying pan (or skillet) and cook the livers lightly on both sides so they are coloured on the outside but remain pink inside. Remove them from the frying pan, drain and cut each half into four pieces – add these to the bowl.

✽ Hard boil the eggs in salted simmering water for 8-10 minutes or until cooked to your liking. Plunge the eggs into iced water to halt their cooking. Shell them and cut each one into halves or quarters. Set aside separately from the main salad bowl.

✽ While the eggs simmer, drain the herrings well and sponge then dry them. Cut them into dice, eliminating all traces of skin. Add the diced herring to the bowl along with all the chopped herbs.

✽ Whisk together the remaining oil and the vinegar until the ingredients emulsify into a sauce. Season to taste.

✽ To serve the salad straight away, toss it in the dressing then add the eggs at the last moment. Alternatively, you can prepare the salad in advance of eating and keep it covered, along with the eggs, in the refrigerator.

✽ Remove the salad from the refrigerator and bring it to room temperature about an hour before tossing it in the dressing, then garnish with the eggs and serve.

Previous Article Off to the Vineyard: Investing in Wine Production
Next Article Taste of the terroir – Franche-Comté