The food and drink of Rhône-Alpes 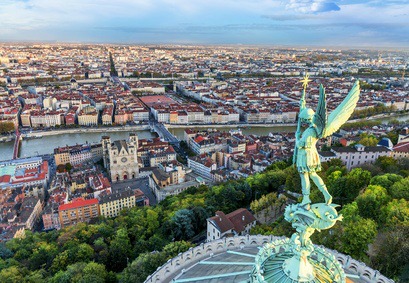 Home to the country’s ‘gastronomic capital’, Lyon, as well as famous Alpine resorts such as Méribel and Chambéry, the Rhône-Alpes region has plenty to offer in the way of hearty, traditional dishes, as well as innovative Michelin quality menus…

Lyon (above) – known as the culinary capital of France, Lyon is famous for its bouchons (a particular type of restaurant specific to Lyon) and its 3* Michelin rated Auberge du Pont de Collonges, otherwise known as Paul Bocuse.

Nougat from Montelimar – the authentic variety contains a minimum 30% almonds / 28% almonds + 2% pistachios and sugar content made up of 25% honey.

Chocolate – Valhrona began life in Lyon and several others in the Rhône-Alpes (Bonnat, Pralus, Bernachon) go so far as to grind their own cocoa beans. Lyon’s Salon du Chocolat famously involves a chocolate fashion show…!

Bugnes – little pieces of dough, twisted and fried in hot oil, then sprinkled with sugar and traditionally sold in the run up to Lent.

Grenoble walnuts (below) – the first AOC certified nut. Harvest time occurs around the end of September / beginning of October. Find them in salads, walnut bread, tarts and pies. Walnut wine (vin de noix) is another speciality. 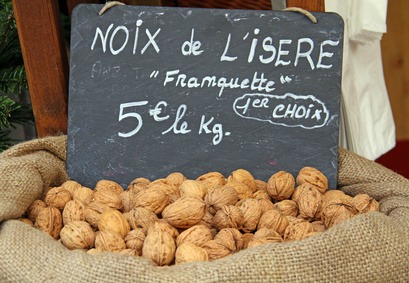 Drôme truffles – held every Saturday morning, the truffle market in Riverenches begins mid November with an official opening ceremony and goes on until the end of March.

Bleu du Vercors-Sassenage – a blue cheese made with milk from Montbéliard, Abondance or Villard cows and celebrated each year at its very own Fête du Bleu.

Rosette sausage – speciality of Lyon and a firm favourite amongst French saucissons secs. Perfect for a picnic with a stick of freshly baked bread.

Chartreuse – vivid green liqueur named after the monastery in the Chartreuse Mountains around Grenoble, where monks were making use of an ancient recipe that saw alcohol distilled with various herbs and plants.

Côtes du Rhône – pay a visit to the former quarry in Châteauneuf-sur-Isère, now housing 1,200 barrels of wine for the Jaboulet estate, wine producers since 1838.