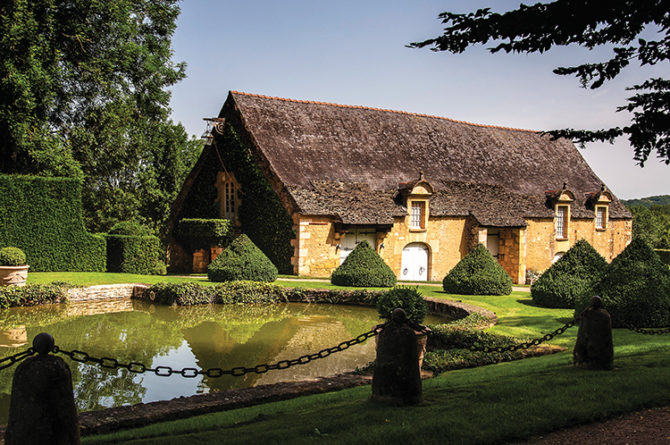 Just a few kilometres north of Sarlat, in the Périgord area of the Dordogne, lies Salignac-Eyvigues and Les Jardins du Manoir d’Eyrignac, which boast ten acres of lawns and nine miles of hedges. Set within a 500-acre, forested estate, with an ochre-coloured manor house perched on a hill at its epicentre, this estate has been owned and managed by the same family for 22 generations – that’s over 500 years…

A medieval castle occupied this site until the 17th century, at which point it was burnt down by opponents to the occupants’ political stance and rebuilt as a manor house. Louis-Antoine Gabriel de la Calprenède first developed the manor’s gardens in the following century, in the fashionable Italian Renaissance style of the time. They were redesigned in the 1960s by Gilles Sermadiras de Pouzols de Lille, whose son and family continue to live there today. Les Jardins d’Eyrignac, the area open to visitors, are listed as one of  the 300 or so ‘Remarkable Gardens of France’ by the French Ministry of Culture’s Committee of Parks and Gardens.

The remodelled gardens hark back to a more traditional style of French jardin, featuring topiary sculptures, vistas, fountains, statues and avenues. It also boasts a large ornamental pool (once a fish hatchery), a parterre and rose garden. A pavilion and a handful of fountains and basins are all that remain from the original 18th-century garden.

At the front of the manor house is a courtyard straddled by two pavilions: the Dovecote, which once served to signal nobility, and the Romanesque Chapel where family baptisms and other ceremonies take place to this day. Between them is a spring – one of seven on the estate – and beyond are outbuildings dating from the 18th century. The first floor of the manor overlooks the French Garden’s parterre, a flat decorative flower bed, designed in geometric patterns that’s vibrant with blue, white and yellow blooms in the summertime and divided by symmetrical gravel paths. 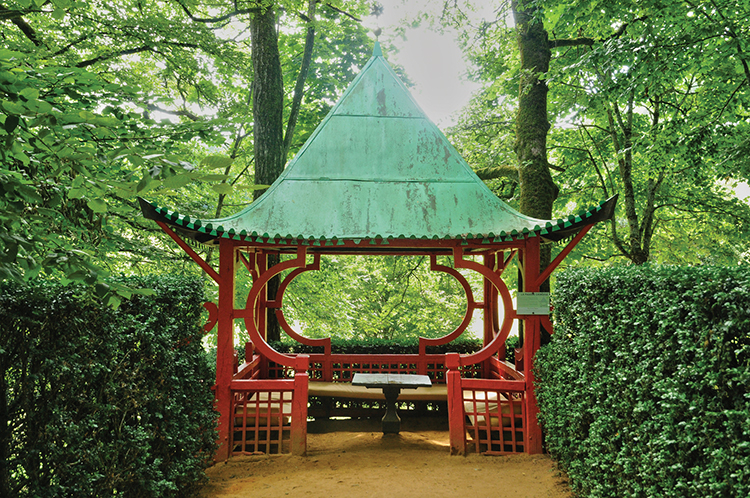 Eyrignac is an undisputed leader in French topiary art, its impressive designs shaped from boxes and hornbeams, and cypresses and yew trees that recall its original Italianate design. All pruning is meticulously done by hand, using manual tools, the hedges and trees moulded into box cones, spirals, balls and arabesques. As a result, the gardens are a constantly growing sculpture that demands continuous attention and scrupulous care. The sculpted shrubbery reflects the manor’s architectural splendour and harmonises with the surrounding verdant landscape and vast forest.
The most emblematic topiary is the Avenue of Hornbeams. Structurally powerful, the avenue is Gilles Sermadiras’s defining signature on his creation and features columns of yew, interlaced with hornbeam garlands. At the end of the path is a Chinese pagoda, recalling the Chinoiserie style which was in fashion at the time of the original garden’s creation. 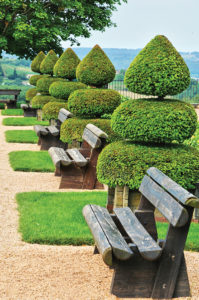 Eyrignac’s rose grove is known as the White Garden, due to the uniform colour of its climbing and ground blooms. Opalia, Albéric Barbier and Iceberg roses flourish within enclosed box hedges for much of the year, their flowering period lasting from late May until the winter’s first frost.

Gardens of roses were traditionally planted to signify purity and elegance, and Eyrignac’s denote femininity, poetry and grace. A pond, encircled with vases from Anduze in the Gard and covered with Surfinias and Gauras, is set in the centre of the garden, embellished with four bronze frogs.

Behind a chestnut-tree fence lie the kitchen and flower gardens, which are separated by an avenue of weeping cedars. Reconciling aesthetics with the production of fruits and vegetables, the kitchen garden grows cabbages, tomatoes, parsley, sage, beans and chard, plus dahlias and nasturtiums. The flower garden’s design mirrors its sister,  but features perennials, annuals and bulbs.

A flower meadow, the Springs Garden, provides a glorious contrast to the careful design of the rest of the sections. Dense with wildflowers, it opens at times onto the countryside beyond and leads into a teeming fruit orchard.

There are many ways to experience the gardens, including guided or unguided tours with optional audio guides. Private tours can even be arranged with the estate’s current owner, Patrick Sermadiras, who provides a personalised perspective on the gardens as well as a welcome drink in his home. Patrick’s wife, Capucine, also offers courses on the ‘art of entertainment’, including flower arranging and table decoration. Each Monday during the summer, the estate  hosts chic evening picnics, when admission includes a cocktail and live music for the entire night.