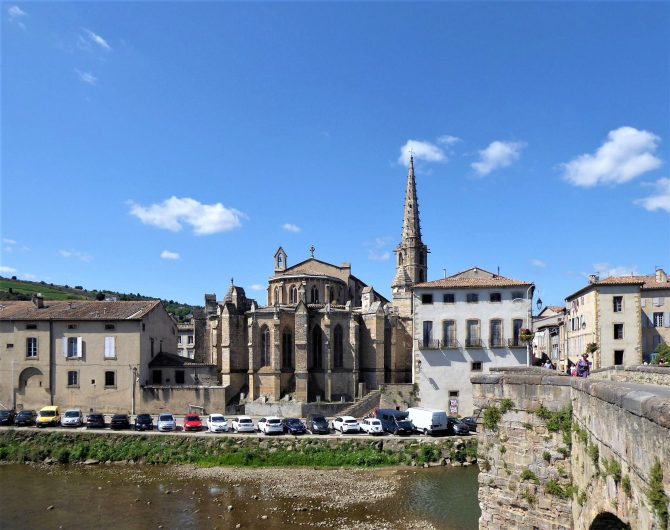 Bubbling over with the spirit of the south, the small town of Limoux in Aude is well worth celebrating, says Julie Savill

If you had to sum up Limoux in one word it would be celebration. The southern town is best known for two things – its carnival and its celebratory fizz, Blanquette de Limoux. Lying where it does, at the confluence of two climates (the Atlantic and the Mediterranean), Limoux has much to celebrate and does so with dramatic flair.

A celebration of life

For the people of Limoux (known as Limouxins and Limouxines), it is in the dead of winter that life begins again. Limoux sits exactly in the centre of Occitanie, France’s southernmost region. In the south of France, where the contrast between winter and summer is felt more keenly and life is unusually quiet in January, carnival celebrates the first stirrings of spring among a populace who are truly Mediterranean sunseekers but nonetheless live on the edge of an Atlantic climate.

Limoux’s carnival has existed since the 1600s, making it one of the oldest in the world. It is also one of the longest running, taking place every weekend from the end of January right through until Easter. The Fecos and Goudils (Occitan for masked actors) dance between one café and another in the central Place de la République, a whirlwind of festivity accompanied by local folk musicians. This is not an organised Catholic procession but a nuanced comedy with rules handed down through generations and rooted in the Cathar culture of this part of the world. Towards the end of the three months, folk music groups from all over the world join in the festivities.

All genres of music

When it comes to music, Limoux is a permanent stage. As soon as the folk music that features at the heart of the carnival is over, so begins the Brass Festival in April, and as soon as the Brass Festival blasts out its final trumpet, the doors of the piano museum are flung open until October to host concerts and recitals. In July, the festival of the Young Virtuosi takes place in Limoux and its surrounding villages. In summer, just half an hour away the annual Carcassonne Festival draws huge crowds who come to watch megastars such as Sting, Elton John and Bob Dylan perform in the intimate and magical environment that is the Unesco World Heritage site of Carcassonne Cité. Their fireworks are attended by over half a million people annually.

Cuisine to rival the capital

Limoux is lucky to have well-established restaurants such as the consistently brilliant L’Odalisque and La Taverne à Bacchus, which have mastered the art of fusing traditional recipes, great local ingredients and thoroughly modern presentation in a way that would not be out of place in Paris’ Latin quarter.

Limoux enjoys a real café culture, centred around its main square, a great place to watch the world go by. Enjoy the food typical of this region at places such as the Café Grand, with its high-ceilinged Art Deco charm, or soak up the hipster vibes of Chez Stephan et Coco, with its outstanding local tapas menu. The weekly market that takes over the whole town is packed out every week.

Raise a glass to the local wine

No description of Limoux can ignore Blanquette de Limoux, the production of which is the most important industry of this town. Limoux is close to the Pyrénées and at 500 metres of altitude, this is one of the coolest winemaking areas in Occitanie, yet it is also close enough to the Mediterranean to make it one of the sunniest towns in the region, delivering the perfect conditions for producing celebratory bubbles! Dating back to 1531, Blanquette is a fizzy white wine which is now distributed globally and was the first wine to be protected by an AOC in the region. The town is surrounded by many pretty and historic little villages which are busy growing grapes and today there are 41 communes that produce 40,000 hectolitres of Blanquette annually.

Blanquette itself is celebrated with its own annual festival – Toques et Cloches. Named after the ‘toque’ (the familiar large white chef’s hat) and the ‘cloche’ (the bell), signifying the bell and tower of a church, the money raised at the event goes towards the upkeep of that year’s chosen village church. Limoux is a lovely medieval town but it is the surrounding pretty little villages, one of which each year is chosen to host this event, that define the Limoux community.

Over two days, the town and villages echo with the sounds of celebration, bargaining, competition, wine drinking and thanksgiving. If you enjoy a celebratory drink then this event is definitely worth attending. It is well organised and the town lays on minibuses to shuttle people to and from the host village. Celebrating couldn’t be easier!

As well as Blanquette, some of the finest red wines in the world are also produced right here, such as the Domaine de Baronarques (owned by the Rothschild family of Mouton Rothschild fame) in nearby St-Polycarpe, where the grapes are handpicked. Some of the wineries in Limoux, like Sieur d’Arques, offer guided tours and courses, as well as dégustations, bien sûr.

A town with a remarkable history

Dating back to the 8th century, Limoux pre-dates France and is over 1,000 years old! While France was still taking shape, the Roman Empire was at its peak in the old Languedoc region, and the joining of two settlements formed what we know as Limoux today, centred around the River Aude.

The nearby monastery of St-Hilaire dates back to the 8th century and is breathtaking in its beautiful symmetry. Take a guided tour to give you an insight into the tumultuous history within its walls: this is not just the birthplace of Blanquette, but the bloody history of the Cathars has also touched this place.

A celebration of a magical land

As you drive down from the north of France, you will note that the flat fields south of Toulouse begin to give way to beautiful tree-lined avenues flanked by fields of vines as you approach the town of Limoux. The undulating hills that surround it and its proud church steeple as you arrive into town herald a different, more vibrant and interesting landscape. It is certainly a town worthy of celebration.