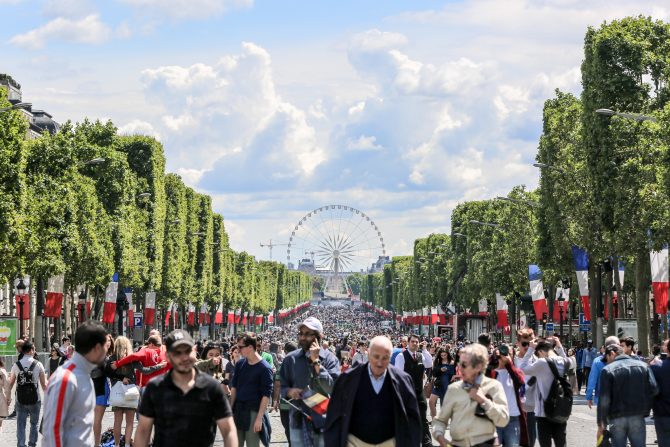 Just like the United States, the UK, and many other countries, France has a number of public holidays (statutory or bank holidays) throughout the year. Here’s what you need to know about les jours fériés in France.

What Is a Jour Férié?

Jours fériés are essentially public holidays, of which there are eleven in France during a calendar year. The list starts with le Nouvel An (New Year) on January first and ends, not surprisingly, with Noël (Christmas) on December 25th.

Employees are entitled to their jours fériés after one month’s employment and get paid at the discretion of the employer with a contract or a collective agreement with trade unions.

In France, there is actually only one legal paid holiday. Since 1947, every May 1st, la Fête du Travail (Labour Day or May Day) is an official working holiday and French law stipulates employees are entitled to a full day’s pay. Workers who cannot take the day off are compensated and receive double pay. May Day usually feels like a typical Sunday. Public transport slows down with less buses and trains. Shops and supermarkets are closed, as well as some restaurants and museums, especially in the countryside.

Every May 1st, trade unions encourage their members to participate in a downtown manifestation (parade). Members of different unions join in the march with banners and balloons to make known their on-going grievances to the population at large. The spirit is usually bon enfant (good-natured) more than anything else.

Jours fériés: Do You Have to Work?

The calendar year dictates if the holiday can be taken or not. If, for example, a holiday falls on a Saturday, no time off is granted. Unlike in other European countries, when a public holiday falls on a Sunday, French employees are not entitled to take the following Monday as a paid holiday.

On the other hand, should such a holiday fall on a Tuesday or Thursday, most businesses will allow employees to take the Monday or Friday off. This tradition, called le pont, (the bridge) allows workers an extended four-day weekend. Many private sector companies complain this practice is costly to the economy. but it does have its staunch supporters. The hospitality industry can rely on those long weekends for added income between the annual holidays.

The Three Types of Jours Fériés in France

Jours fériés can be divided into three categories. Almost half of them celebrate the Christian faith. Others such as the Fête Nationale or 14 juillet, (Bastille Day), are called civil holidays.

Bastille Day commemorates the storming of the Bastille, a notorious Parisian prison, on July 14, 1789. It marks the beginning of the French revolution, which, after several upheavals finally transformed France into a democracy. Every year, the French look forward to the spectacular défilé militaire du 14 juillet, (military parade) held in Paris on the Champs Elysées, and attended by the President and many dignitaries.

There are two holidays that commemorate the two World Wars: le Jour de la Victoire 1945 (V-E Day) on May 8, and Armistice on November 11. These are not only celebrated in France but all over Europe and abroad.

In 2005, then French prime minister Jean-Pierre Raffarin removed Pentecost Monday from the public holiday calendar. The tax revenues incurred for that day were to go into a special fund for the elderly living in maisons de retraite (retirement homes). That decision was not well received by the public and was eventually overruled by the courts in 2008. Employers are now free to choose whether to give or not give a day off.

Le jour de l’Assomption (Assumption of Mary) on the 15th of August, is not celebrated in France as it is in other European countries, since it falls during les grandes vacances (the yearly paid holidays which usually encompass the whole month of August).

On the other hand, la Toussaint (All Saint’s Day) on November 1, is always well observed. The French look forward to this holiday when colourful chrysanthemums appear everywhere, in outside stalls, flower shops and supermarkets. They will splurge and buy several plants, which they then place on the graves of deceased family members and even treasured friends. With those lavish splashes of colour adorning graves, cemeteries suddenly look like well tended gardens.

Which Shops and Services Are Closed on Jours Fériés?

As in many countries, civil servants are usually the ones who benefit the most from those eleven jours fériés. Offices such as the Trésor Public, (government department in charge of public finance) and La Poste (post office) are always closed on those days. Banks are also often closed.

With the exception of New Year, Christmas and May Day, most stores, cinemas and museums in France will remain open, however, it is best to check with your local storeowner. Notices are usually posted at the entrance door.

There is however a charming exception at New Year and Christmas, when some bakeries and supermarkets open from morning till noon, so nobody runs out of food on those cherished holidays.

Previous Article Emergency Numbers In France: Who to Call & Useful Phrases
Next Article Cancelling insurance in France: the Loi Hamon