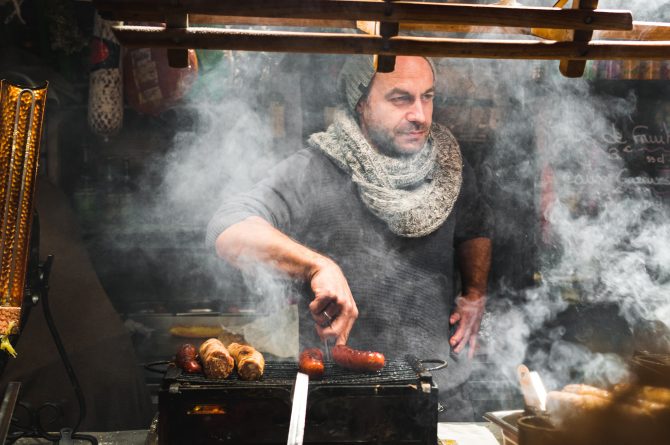 Once well established in France, either in a second home or permanent residence, the great majority of expats will want to delve into French culture and discover how the locals really live. During the winter months in more rural areas, you might be forgiven for thinking that the French either hibernate completely or disappear to Martinique until spring arrives.

As the days grow warmer, however, there are definite signs of life reviving in deepest France. At the normal day markets, your parked car will start to gather fliers on the windscreen, advertising a plethora of forthcoming night markets and soirées in the area – so, what are they all about? This article describes what you might expect to find at these very special French events, bearing in mind that they will vary greatly in style according to the département you live in. The important thing is just to go and see for yourself.

While the weekday produce market is a year-round feature of almost all French towns and villages of any size, the night market is definitely a summer event and typically occurs from around June to early September. It’s also fair to say that the further south you are in France, the more common the night markets become, as they tend to rely on the balmy evenings of the summer months for their uniquely laid-back atmosphere. The warm air, heady fragrances and sensuous ambience of the early nighttime in southern France would be difficult to replicate elsewhere.

The raison d’être of the day market is invariably the abundance of fresh vegetables, meat, poultry, cheese and flowers produced locally, according to the season of the year and the near-mystical qualities of the ‘terroir’. However, at the night market, the same range of stalls take on a very different character. It is the turn of the artisan jewellers, artists, potters, weavers, chocolatiers, nougat sellers, vintage clothes merchants, belt and hat makers and many others to display their eclectic wares. Some are distinctly niche entrepreneurs, such as the girl who offers protective covers for stiletto heels in the rural heartland of the Dordogne. Others might sell you a hand-thrown mug painted with vivid Provençale sunflowers, so you can drink Van Gogh-flavoured tea in the morning. In addition to the French traders, there are often Moroccans, Algerians, Vietnamese, and numerous other nationalities represented, and their offerings include elaborate leatherwork, brightly coloured fabrics, and varied and fragrant food stalls, which vie for attention with the more usual crêpes and moules-frites.

No night market would be complete without its music, and this might vary from a single flamenco guitarist, just up from the Pyrenees, to an enthusiastic local jazz band or blues group. Once a double circuit of the market stalls has been completed (there’s always something you miss the first time around), just settle down on some stone steps in the ancient square with a morceau of food and absorb the sounds, scents and saveurs of the night market – there really is little to beat it.

Every commune is different, of course, but soirées tend to fall into two broad categories. There are those that are held within the precincts of the village or town, often in the central market square, and others that take place in a dedicated field on the outskirts, which may have been used for feasting purposes since medieval days. In either case, the soirée is an opportunity for the whole community to shake off the winter torpor and renew wider family life and old friendships, with good food and wine in profusion.

The venue for the soirée, wherever it may be, will be laid out in advance by village stalwarts with long trestle tables in multiple rows and hundreds of chairs. Attendance is free, and the early birds will have the pick of prime positions among the tables. Experienced soirée watchers will observe whole clans of extended families laying claim to their favoured spots and ensuring that everyone from grandmothers to infants have a suitable seat, according to the family hierarchy. The presence of even the youngest children until late at night might seem remarkable to many expats, but it is a given fact that they will enjoy the soirée equally, until the youngest fall asleep at last on the chairs while their teenage siblings sidle off behind the nearby trees for a tentative liaison amoureuse.

An essential fact to bear in mind before attending your first soirée is that you are expected to bring your own ‘couverts’, in other words, all the cutlery, plates, glasses, napkins etc., for your whole party. In practice, a pre-packed ‘soirée sack’ containing all these items, ready to go at a moment’s notice, saves having to dig things out of kitchen drawers. This certainly aids spontaneity if you suddenly fancy a soirée instead of cooking an evening meal, as there is bound to be one nearby on any day of the week in summer. Another important point of etiquette to note is that it’s considered very poor manners indeed to take foodstuffs (other than a bottle of water) with you to a soirée. The hard-working caterers all pay for their stands at the soirée, so it’s only fair that you should buy your repast from them rather than having a furtive picnic under the disapproving eyes of all around you.

As might be expected, food is the main event at every soirée in France, followed closely by the products of the local vignobles. The food stands are amazingly varied and are usually arranged around the edges of the square or field hosting the soirée. Local products are always prominent, so in the southwest of France, for example, you might find succulent duck breasts and foie gras from Sarlat, fresh ozone-flavoured oysters from Arcachon and cognac-steeped prunes from Agen. A standard fixture at the soirée is the boucherie display, with a vast selection of steaks to tempt the hungriest carnivore. It’s a fact of life that the French prefer their steaks to be chewier than would be customary in either the UK or USA, so their sides of beef are rarely hung for long. It, therefore, pays to be selective about your steak, and you will seldom go far wrong with a thick basse cote(shoulder) well marbled with fat, or perhaps a tasty bavette (flank) at the slightly cheaper end of the range. In either case, the only natural accompaniment will be a large punnet of crisp, double-fried frites. On the many other food stalls, you’ll find local charcuterie with every possible variation of saucisson sec, from sanglier(boar) and goose to smoked pork with hazelnuts, vast platters of steaming paella, fish of all types – the dos de cabillaud (cod fillet) over charcoal is sublime – as well as oriental platters and, of course, fromages to suit all tastes, from creamy Camembert and Comté to tangy Bleu d’Auvergne and magnificently pungent Époisses, if you’re brave enough.

No soirée would be complete without a generous choice of wines available, and there will often be several local vineyards on hand to regale you with the virtues of their vintages. Don’t necessarily expect them to bring along their finest aged wines to the soirée; this is more the occasion for a dark Cahors red, laden with tannin, or a robust Pécharmant with powerful notes of Cabernet Sauvignon and Malbec grapes. These are the perfect accompaniment to the richness of magret de canard or simple steak or moules-frites, and nobody will raise an eyebrow if you’re drinking your wine from a plastic cup, in good soirée style. These days, with the burgeoning craft beer movement taking hold all over France, you’re also likely to see a stand for the local micro-brewery. Be sure to give their oddly named brews a try – you’d be surprised how good a pint of Corsican IPA tastes on a hot summer evening!

The final component of a well-run soirée is the entertainment, best enjoyed as an extensive meal is being digested and the second bottle of wine is about to be uncorked (for the non-drivers, bien sûr). The musicians are likely to be of the home-grown variety but somehow this suits the time and place perfectly. So, don’t be surprised to hear the best efforts of a group of French rappers mangling the English language beyond recognition to a thudding drumbeat! Happily, this is just as likely to be followed by a petite chanteuse, who can sing Édith Piaf songs almost as powerfully as the original versions, or a solo guitarist who accompanies his own renditions of John Denver ballads as if nobody else was there. Whoever appears on the makeshift stage, it really doesn’t matter too much, as by now you’re replete with excellent food and wine and drawing to the end of a happy and contented soirée, one of the great social events in French life today.

Previous Article 8Wines’ Six of the Best French Wines to Buy Right Now
Next Article Gite Classification in France: How & Why to Classify Your Gite