A Grape Undertaking in Gironde 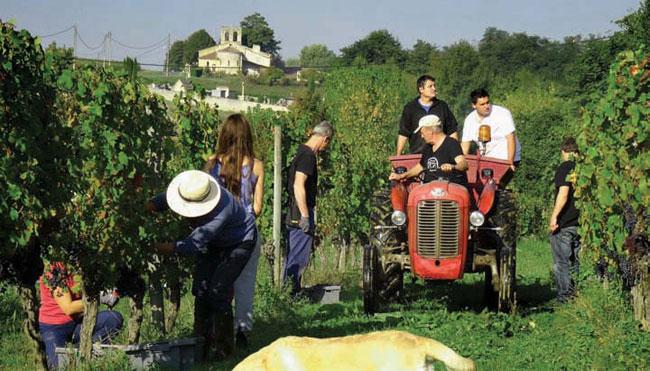 David Stannard, from Surrey, moved to the village of Cardan in the south-western Gironde département in 1998, where he runs the Paradise Rescued organic winery…

How did you choose the village?

We were attracted to the Gironde because of my love of wine and the beautiful landscape that so many vines create, in and around the area’s sandstone buildings. After a few research trips, we decided on the Entre-Deux-Mers wine area. The proximity to Bordeaux, with its international airport, was also a big plus as we expected to be living ‘in and around’ Europe. Then, just 14 days after we took possession of the property in mid-1992, I was offered a job in Australia!

When you bought the property, what were you looking for?

We were looking for a quiet rural environment – a real holiday ‘home away from home’ but one immersed in French culture. We deliberately avoided an area popular with tourists or other Englishspeakers. We wanted to blend in and be part of the community, as far as was possible.

Ironically, when the village grew and a tsunami of new property started to roll towards us and our neighbours, threatening to convert our vineyards into a housing estate, it was us – the foreigners – who took the initiative, in order to safeguard the local environment.

What aspects of the village do you love?

The people and our community of Cardan. It’s simply amazing, every harvest time, to be joined in our vineyards, winery and home by all of our friends and neighbours, helping us as a community to sustain the future of our rural landscape, which is all overlooked by the 12th-century church of Cardan. It’s been one of life’s unique pleasures to be able to lead and be part of such a project.

Is there any local produce you’ve taken a particular shine to?

Bordeaux wine, of course., but I was a fan before I got there. Now it’s a passion. And all the local French food produce is so special.

And what about the local history and architecture?

I love all the small medieval bastide towns, with their central squares and walled rampart exteriors. When mixed with a morning market, filled with colourful stalls and traders, it creates a gorgeous atmosphere.

Twenty-five years ago, there was virtually no organised walking or marked footpaths but that’s all changed. It isn’t unusual for a large group of ramblers to make their way down the lane past our house on a daily basis. And better still, the countryside is very open so you can wander through the  vineyards, from one village church to the next.

Have you found it easy to be accepted by the locals?

Initially, I was only in Cardan once a year, each September, because of working in Australia, and we were considered to be outsiders. However, as my visits became more frequent and, particularly, as the Paradise Rescued wine project started, I can honestly say that many of my neighbours became my best friends. It’s rare that I eat at the same dinner table in the village on two consecutive nights. And I couldn’t have local suppliers, as we started up Paradise Rescued with no previous viticultural or wine experience. Whenever I’ve needed help, it’s always been offered sincerely.

How are your French language skills?

I was fortunate to have studied at a progressive, pro-European school in north-west London, from where I’d been immersed into French life, school and culture by spending four weeks in Rouen at the age of 14.

Although it’s never perfect and I tend to bark in a shocking accent, my spoken French is now a 24/7 activity. I think in French when I’m in Cardan. Even now there are plenty of challenges with the vocabulary, particularly when it comes to law, insurance and DIY.

What has surprised you most about living in the village?

The bit I love the most is having been accepted as a friend. I’m the “mad Australian” who had the vision to create an award-winning Bordeaux winery.

David is also the author of Paradise Rescued: From Cabbage Patch to Cabernet Franc. For more information, visit www.paradiserescued.com/book

Previous Article How should I own my property in France?
Next Article Le Grange: Beautiful Barn Conversion in Brittany