Stephen Spencer moved to France and opened a shop 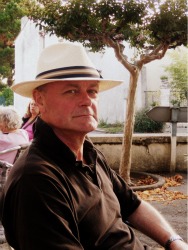 Stephen Spencer had spent plenty of time in France before finally deciding to move there in September 2010, having been convinced by his friends that it offered an interesting alternative to life in Britain and North America.

Stephen now lives with his partner Valerie Faure near Bergerac (Dordogne) and less than six months after his arrival, he opened a shop, So British, in Bergerac’s old town. But prior to that, Stephen had been more used to selling properties than clothes.

FrenchEntrée popped into the shop shortly after its launch.

Tell us about the thinking behind your shop, So British…

Clothes tend to be more expensive in France than in Britain and the selection is often repetitive. We wanted to offer alternative products and ‘price points’. We both have a flare for fashion and accessories, Valerie more so than me.

When did you come up with the idea?

Last year, no doubt prompted by the recession and a long study of British styles that the French appreciate.

Did you spend a long time searching for the ideal business premises?
Yes – the key money for existing shops can be exorbitant. 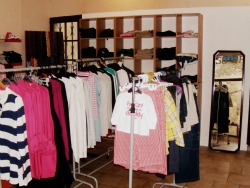 We are just coming into the tourist season when you expect to do up to 90% of your sales. Previous experience has taught me to be patient in building up regular local trade outside the core tourist season.

What have been the main challenges about the move?
Bureaucracy can be a problem for non-natives but a French partner makes all the difference! With hindsight, I would recommend that everybody considering a permanent move take an extended holiday in France to discover the realities of life here. New arrivals contemplating establishing a business may also want to think about courses run by the French Chambers of Commerce.

A morning jog in the countryside, followed by a relaxed French breakfast with Valerie. Then it’s a short drive to Bergerac to prepare the shop for opening. Sometimes, a delightful bistro for lunch. Then if the weather is good, dinner at a little country inn or aperitifs at home and a barbecue in the summer. 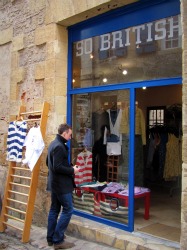 How have you benefitted from the move?
I’m ageing less quickly than in Anglo-Saxon cultures – it must be the excellent food and delicious wine, as well as the possibility to live in a peaceful environment.

Have you found it easy to integrate into French life?
Yes, Bergerac is very polyglot.

What are the differences between life in France and life in Britain?

France is definitely more laid back, which explains why it takes longer to get some tasks done here. But one just accepts it and gets on with having another bottle of wine.