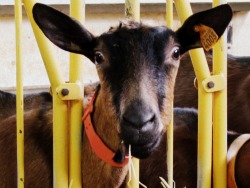 The French have long understood the importance of fresh, locally sourced ingredients, which goes some way to explain the popularity of their markets and farms such as La Borie d’Imbert where you can buy cheese and see it being made.

The chèvrerie-fromagerie in Rocamadour (Lot) allows visitors to get up close to the goats used to make Rocamadour cheese and provides an opportunity to learn about the cheese ripening process and taste the results in the form of cabécou and tomme.

The tour begins with a short film (in French) that covers everything from how the goats are looked after – they love spending time outside – to the various stages involved in creating a cheese worthy of an AOC label.

After that, signs lead visitors through to the barn where all the goats live – it’s not smelly or particularly dirty and the tiny birds that live in the rafters flit about filling the air with the sound of the outdoors. 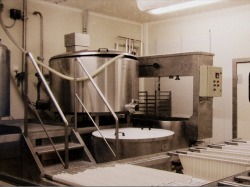 There are two varieties of goats at this farm, Alpine (brown) and Saanen (white). They are curious creatures and most will pop their heads up to have a look around when someone comes in.

However, their attention soon goes back to the hay in front of them. Visitors can go up and watch the goats as they eat and even get so close as to scratch their heads. At certain times of year, there may be a chance to see a kid being brought into the world.

The male and female goats (does and bucks) are kept separate and the kids are all in together, huddled under a heat lamp. From time to time, the chevriers who look after them will take one out and bottle feed it.

Tosca is a collie dog that runs round making sure the farm and all its goats are working as they should be. When it’s time for milking (5pm – 7pm) Tosca helps herd the goats into the dairy and sees them out at the end.

On the other side of the barn is an exhibition to introduce visitors to the various chevriers and fromagiers who work on the farm and explain the roles they play on the farm. 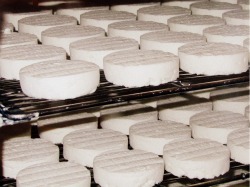 From there, viewing windows allow you to follow the cheese making process from start to finish. Once the milk has been collected, the first thing to do is separate the curds and whey.

After that, the curd is shaped using moulds and left to dry. Several days later, a skin will have formed and the cheese is ready to receive its label on the way to the farm shop.

Its not just cheese on sale in here but plenty more cheese related: special boxes for keeping cheese, chutneys and wines, as well as gifts and souvenirs such as magnets, postcards and keyrings.

Some facts from La Borie d’Imbert:

Visits to La Borie d’Imbert are free and the chèvrerie-fromagerie is open every day.