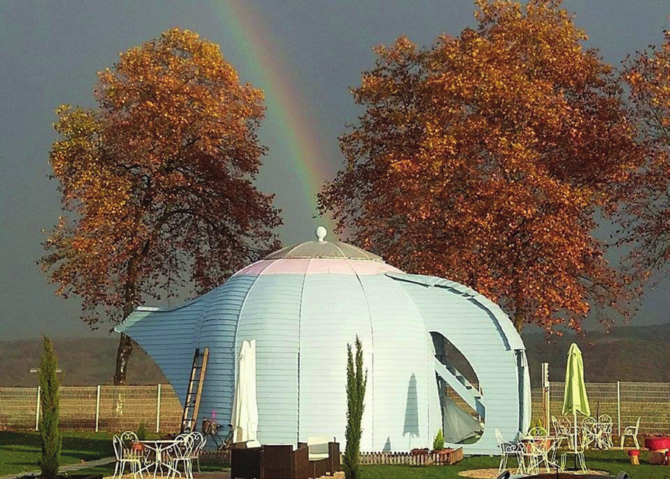 Three years ago, Tina Sharpe fell in love with a quirky teapot-shaped shed and embarked on the barmy mission to ship it from Scotland to rural France and turn it into a successful café.
Alice Phillpott meets the plucky entrepreneur

A chance purchase online of an artist’s work shed marked the first step in a quest to create the ultimate English afternoon tea experience in a quaint, unassuming French village for one determined entrepreneur.

Businesswoman Tina Sharpe had seen the unusual structure for sale in summer 2014 and snapped it up without a moment’s hesitation – she knew exactly what she wanted to do with it. Three years down the line, the shed has been converted into a glorious and thriving teapot-shaped café, Tea in the Teapot, a perfect haven tucked away in the countryside of southwestern France. 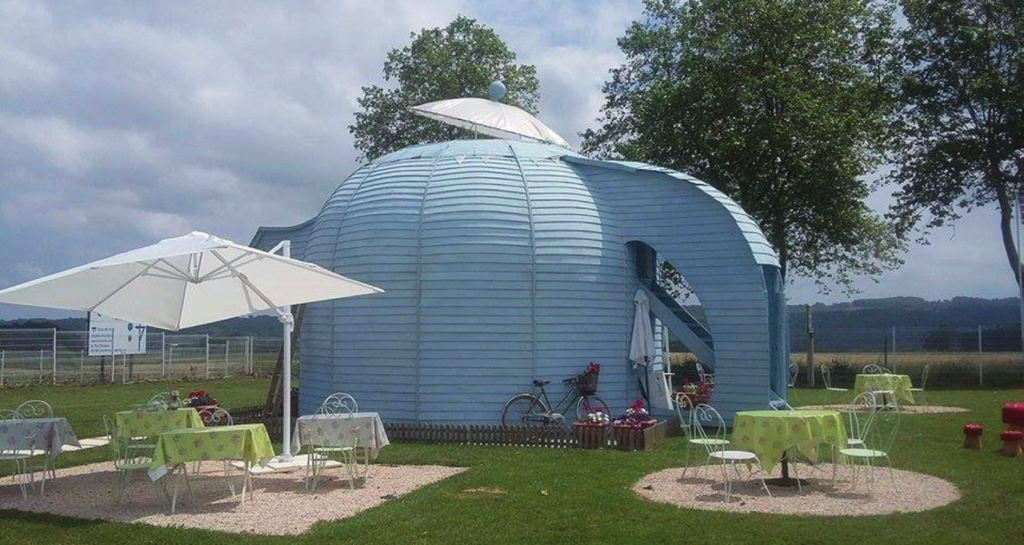 A long-time lover of France, Tina and her family had enjoyed many trips around the country over the years and dreamed of buying a property in the Hexagon. Just over a decade ago, they decided to follow their hearts and purchased a holiday home in the small village of Castelnau-Magnoac in the Hautes-Pyrénées – and they’ve never looked back.

‘The Magical Teapot’, as the shed was formerly known, started its life in the rural village of Lilliesleaf in the British invasion Scottish Borders and was originally used for storing wood by local sculptor Ian Hunter. All that was needed was an artist’s creative vision and the teapot shape was born. Needless to say the unique shed was already turning heads long before it crossed the Channel.

Tina’s plans had a headstart after the teapot shed was runner-up in the Shed of the Year 2014 competition. This impressive result led to instant fame and considerable publicity on television and in various newspapers worldwide, prior to its installation in France. With the help of a strong online presence, it gained its Magical Teapot moniker internationally and was soon being talked about from Scotland to as far afield as Australia.

However, a number of things had to be done before it could embark on its new life in France. First of all the cumbersome construction needed to be dismantled and the pieces meticulously numbered and photographed
before being transported to Castelnau-Magnoac. Once it had safely arrived, Tina set about the mammoth task of re-assembling the teapot. Its extraordinary transformation into an English vintage tearoom had begun.

“The idea of opening a vintage English tearoom in France was inspired by our love of all things traditional – beautiful china, homemade cakes and luxurious clotted cream,” explains Tina. “The plumbing system and electrical wiring were installed shortly afterwards, enabling the tearoom to be supported by a small kitchen and work space. Finally, the addition of a charming outside seating area enabled customers to take their tea outdoors and relax in the warmer weather. Decked in vintage decoration and brimming with classic china, Tea in the Teapot was ready to open its doors to the public in August 2015.”

Tina says proudly: “People from all over the world support us online, have followed our journey and enjoy what we are doing.” 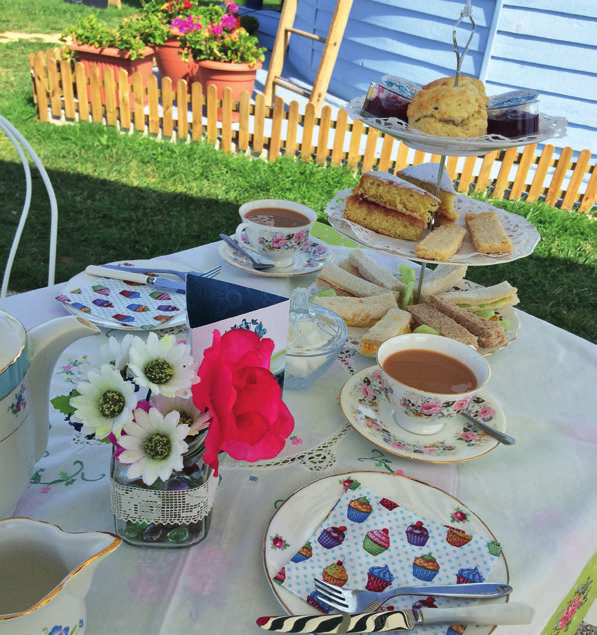 The delicious cakes are all homemade

Nestled in the middle of the hills of Magnoac, picturesque Castelnau-Magnoac is ideally positioned at the junction of two major roads, Toulouse-Tarbes and Auch-Lannemezan, making it easily accessible. Benefiting from views of Lac du Magnoac to the west and the Pyrenees to the south, the village is steadily developing into a flourishing water sports centre and an attractive site for tourists. 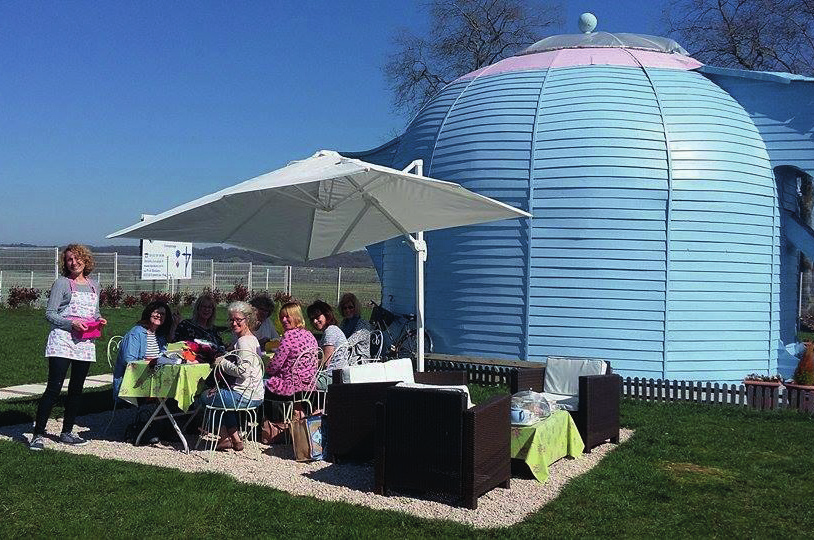 The addition of a charming outdoor seating area means people can enjoy their tea outside in warm weather.

But with a population of less than 800, Tina had her work cut out to attract a regular clientele. Nevertheless, she quickly discovered that the Mairie was on her side.

“It has been difficult at times, but we’ve been very lucky to have had such great support from the locals and visitors to the area,” she adds. “They love the Englishness of the traditional afternoon tea and our collection of vintage china. They love the Rodda’s Clotted Cream as well.” All the cakes and light lunches are made on site, using fresh, local produce, with the exception of Rodda’s Clotted Cream, which is imported from the UK. Such is the demand for homemade goodies that Tina’s scones, Victoria sponge cake and chocolate brownies have often been known to sell out. Tea in the Teapot also distributes clotted cream across the whole of the southwest of France.

Interestingly, the tearoom’s customer base is composed of a mix of local French people, lots of English expats and a large proportion of tourists who are staying in the area or simply passing through. It has also won the support of people in Toulouse, which is just over an hour’s drive away. So whether you’re a homesick Brit, an international traveller or a curious French person, you’re bound to find your slice of heaven there. 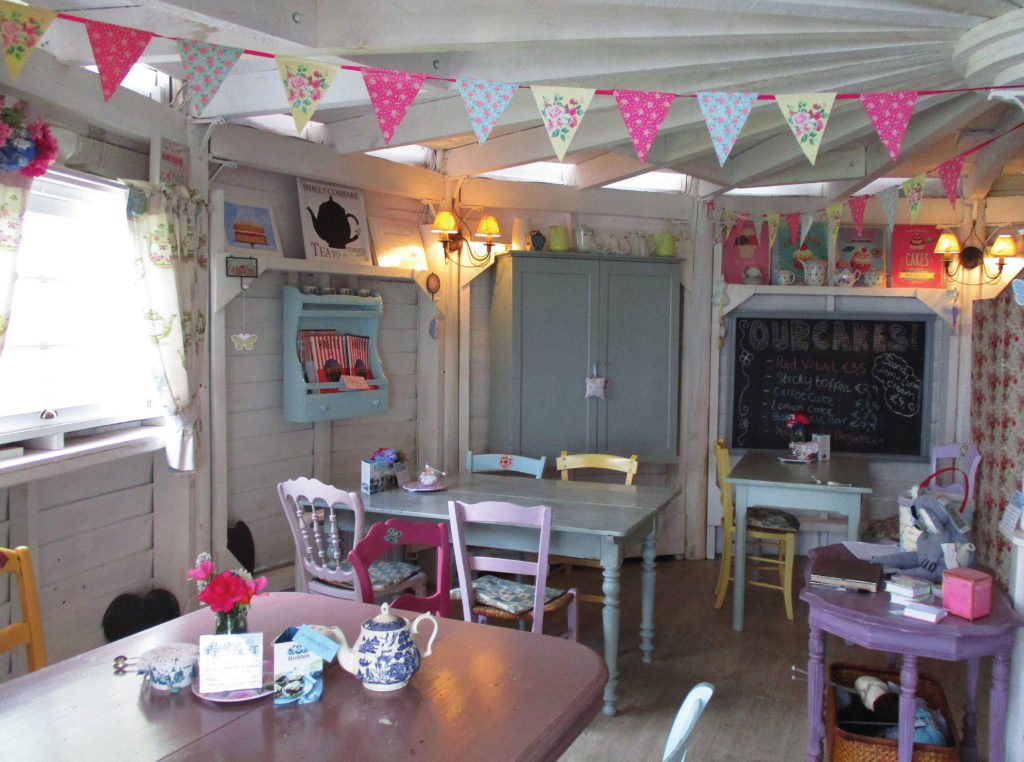 Vintage decoration give the tearoom a charming, homely feel.

As for the language, Tina admits she still has a way to go and her hectic schedule means that unfortunately she is not always able to put the time in.

“I am still learning the language,” she confides. “We hold French lessons in the Teapot on Wednesdays, but I am always too busy to attend. I’ll get there one day!”

Yet life hasn’t always been a breeze. The trickiest hurdles along the way have been to try and get support from people in Castelnau-Magnoac and to continually bring new people to the tearoom.

“It’s very rural and we are not even in the centre of the village,” Tina explains. “So we have to work extra hard to attract people to the area.”

She has taken a direct approach to this challenge, using a combination of the website, social media and several newspapers to promote the business.

Community events at the coffee shop are usually popular and well attended; and help to reinforce Tea in the Teapot’s hospitable reputation.

It continues to prove itself as a dynamic hub of creativity, hosting regular knitting groups. In 2016, the café launched a Tea Cosy Challenge to raise funds for Association Dominique in Toulouse and Great Ormond Street Hospital
in London. The response was phenomenal, according to Tina, with hundreds of knitted squares sent from around the world.

With such a full agenda, she employs a couple of local girls to hold the fort when she is back in the UK. This gives her peace of mind and ensures minimal disruption to the running of the tearoom.

So what is the key to setting up a successful business in rural France? As far as Tina is concerned, it can be summed up in two words: la Mairie. It appears that its vital role cannot be stressed enough. The mayor and his secretary provided invaluable aid, ensuring the laborious paperwork was correct and completed on time. The pair also went out of their way to spread the word about the fledgling business. 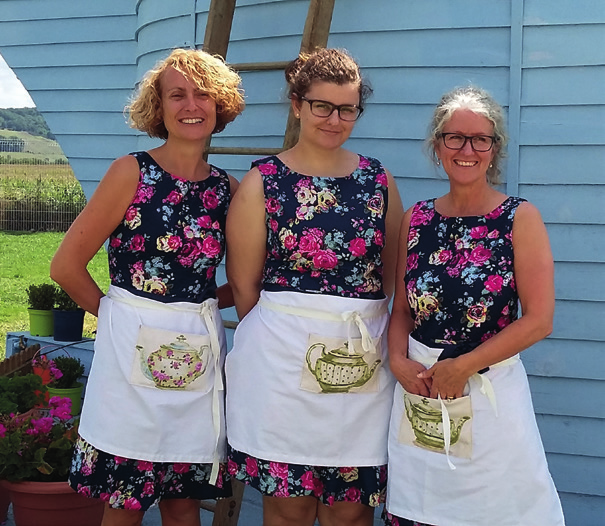 Tina (far right) employs a couple of local girls to help out.

Indeed, getting the mayor on board when you’re embarking on any new project from day one will make for a much smoother and rewarding experience, as does interacting with local residents and understanding their needs. “Ask people what they would like to see and what they think you could be doing differently or how to make improvements,” Tina advises. “Ask lots of questions and find out as much as you can in your area and what the requirements are.” Patience is the watchword, she insists.

“It’s important to persevere as things can take a long while to sort out in France.” 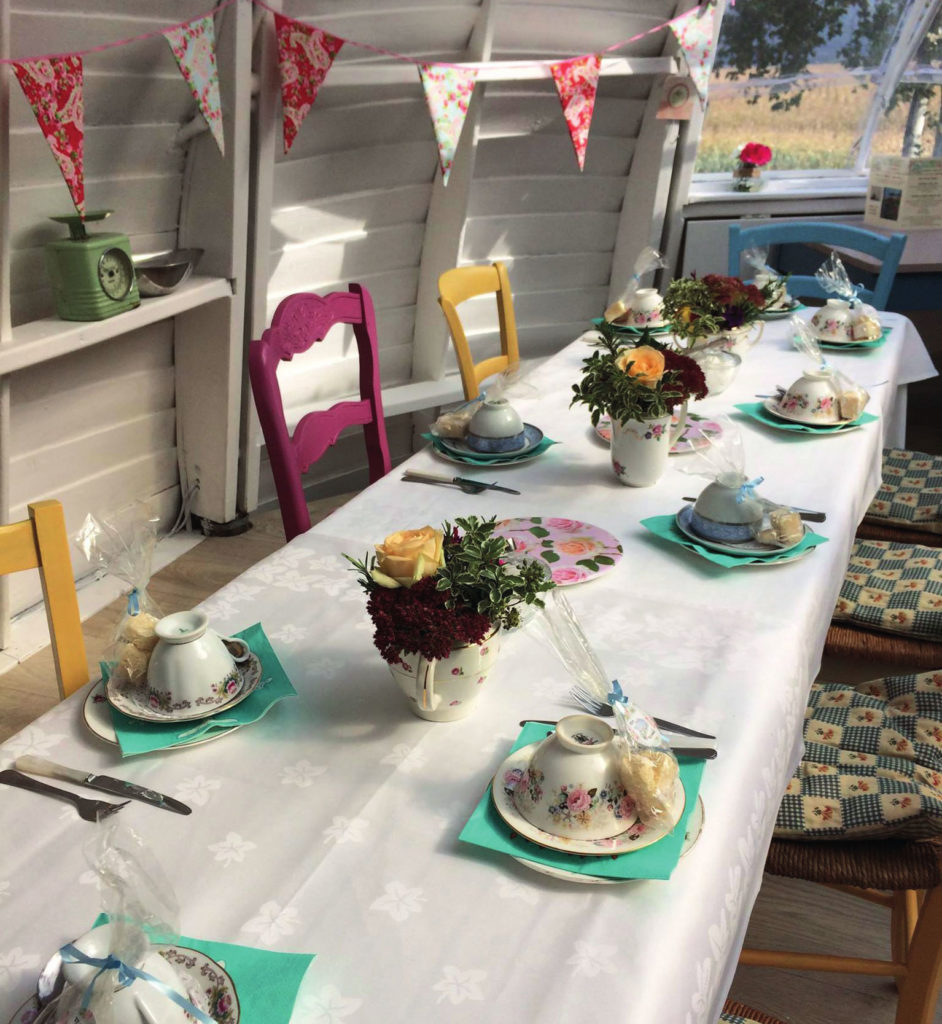 She anticipates that this summer will be the busiest season so far at the tearoom. “We have already doubled what we were doing last spring, so it looks as though it is going to be a very busy year!”

And what better way to spend a summer’s afternoon than in the peaceful, sunny grounds of Tea in the Teapot.

Find out more about Tea in the Teapot and the local area at www.teaintheteapot.com