Kiwi Adventurers | Living in the Dordogne 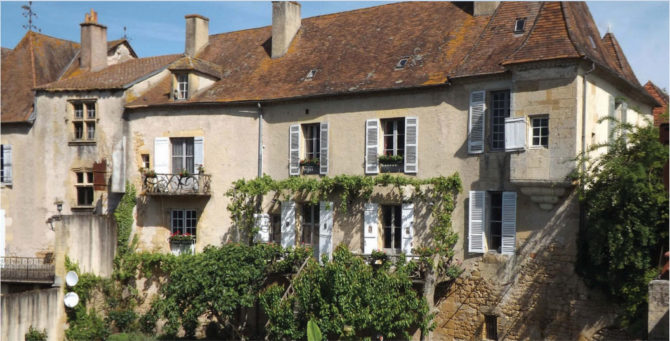 Kiwi Adventurers – Living in the Dordogne

Susannah Hickling meets a couple from New Zealand who fell in love with an ailing historic house in the ancient village of Lalinde.

Many people would be worried about taking on a major renovation project, but not Brian and Cheri Hewitt, and their gorgeous riverside B&B is a testament to their commitment to the Maison Porte del Marty.

FrenchEntrée Magazine: What brought you to France?

Brian Hewett: We decided that the shift work which Cheri did as airport ground staff in New Zealand and the long hours I put in as a ship’s chandler gave us too little personal time and thought we’d look for an adventure.

Cheri has a British father, which entitles her to a UK Passport, but France was the only country we considered. We’d been here for holidays and loved the architecture, the beautiful countryside, the history and the fabulous food!

FE: How did you find your house?

BH: We initially looked for a house on the Atlantic coast, between Nantes and Royan, when we visited in summer 2006. We couldn’t find anything suitable, but it helped us focus on what we did and didn’t want. We wanted blue skies similar to New Zealand, so we returned to NZ and continued researching online, but further south. Our house was listed with an agency in Beynac. The position on the river looked very attractive but as the ad read “between Bergerac and Sarlat”, we had no firm idea where the house actually was until we arrived back in France in spring 2007.

We met the agent on a wet day in Lalinde and had to slash our way to the front door as the property was so overgrown. But, when we stepped inside, we thought, wow! Maison Porte del Marty had style, warmth, atmosphere, wonderful spaces and a great layout, but it was everything we didn’t want. It needed a full rebuild and had no pool, but we were smitten. The house had been in the same family for around 800 years.

FE: Tell me about the house…

BH: The local historian told me that Lalinde was a summer crossing on the Dordogne river in Roman times, and where our house stands there was a substantial Roman fort. This fell into disrepair when the Romeans left and, later, a fortified house was built. This was the base of the village Knight, who protected the local region.

The house was rebuilt again, as part of the city walls, when Lalinde was built as the first bastide town in the Périgord during the 13th century.

The original village entrance gate from the river runs through our cellar. The house was modernised during the 1870’s.

The Maison Porte del Marty has a lot of windows all facing due south, onto the riverside, so it’s very warm during winter and very comfortable in the summer.

We run it as a B&B, which is now firmly established and doing well.

FE: How did you find the buying process?

BH: Our Agent Immobilier, Lilly, held our hands throughout the process. She said to allow three months and that was spot on. However we agreed to use the seller’s notaire and he was very disorganised. This was stressful, especially with our limited French, but everything was eventually sorted out.

We thought that the pre-purchase surveys were like a builder’s report but soon realised it had nothing to do with the structure of the house. In hindsight, I’d suggest that, for an old house like this, a few hundred Euros on a structural report would be money well spent.

FE: How did you go about renovating?

BH: When we got here, there was one basic toilet, a very simple kitchen, virtually no wiring or plumbing and a fireplace in every room. There had been a lot of water damage to the walls and ceilings before the roof was replaced in the 1990’s, so they all needed to be repaired and/or re-plastered. Our first goal was to create a new bathroom, a bedroom and a kitchen.

We used a mixture of French and British artisans who were recommended by new friends. The French artisans substantially under-quoted the labour aspect, but did a very good job, while the British builders, as it turned out, didn’t offer the obligatory ten-year guarantee.

However, in essence, we’ve achieved the house we desired, though we still have some bigger projects, like double glazing and a small swimming pool planned.

FE: Knowing what you do now, would you have done anything differently?

BH: It’s worth spending some time selecting your contractors. In future, we’ll ask for a couple of references for similar work and visit the properties to speak to their clients.

A 480-square-metre house like ours is a big project with many unknowns behind the walls. You need to work with someone you can trust to do the right thing and give you regular updates and suggestions.

BH: Compared to New Zealand, France seems one of the most demanding countries in the world to operate a business. The hundreds of quasi-government associations, the tax returns and the endless array of minute taxes frustrate the life out of me.

The lack of any response to letters, emails and voicemail – even if you want to buy something – also drives me crazy. But in general we go with the flow and just accept that, with all the prose and cons, France is a wonderful place to be.

FE: What are the joys?

BH: Watching the locals on market day, greeting and interacting; swans flying through the morning mist in front of our house, young men proudly dancing at the village fête with their grandmother; the burst of spring and arrival of autumn in our valley, the friendship and great food at an outdoor village meal; fields of sunflowers smiling in the sun; ‘messieurs – mesdames’ as people walk into a shop, a bride and groom arriving at the church on a cart pulled by oxen – these are just some of the delights of living in this most gracious country.

WHERE DID YOU MOVE FROM? Auckland, New Zealand

Originally published in issue 117 of the FrenchEntrée Magazine.

View Property For Sale in Dordogne >>>

Previous Article Buying in France? It Pays to Get Tax Advice Early
Next Article Fixing the exchange rate, how it works