Provence has triggered many a creative impulse. Patrice Bertrand meets two expats who have drawn on art, and the local fare, to make ends meet

“I think I’m probably the most stressed person in Provence, which is a very un-stressed place,” says Julian Merrow-Smith, a British painter who lives with his wife Ruth and their seven year-old son Louis in a tiny hamlet near Bédoin, in the foothills of Mont Ventoux. But for Julian living here amid vineyards, olive trees, stunning landscapes and perched villages, long afternoons with pétanque, Pastis and siestas are not an option. “We work and we are very busy,” he explains, before adding with a smile, “but we like it.”

Like other expats who choose to move to Provence, they must make a living in an area where jobs are scarce – even for the local population. But Julian, an art school graduate, found a brilliant solution. For 12 years now, he has been selling post card size oil paintings (which range from $100 to $2,000) on his auction site, shiftinglight.com, from the comfort of the couple’s little stone house. Each day or so, he sells a painting to the highest bidder for an average of $400. “I have 7,000 subscribers to my mailing list, and a few real collectors,” says Julian. “There are people with 25 or 30 of my works, and people who buy one a year.”

He usually paints still lifes – vegetables from his garden, fruit from the market – and Provençal landscapes. But don’t expect to see an artist in a straw hat and espadrilles leisurely carrying his easel and brushes through the garrigue and the cherry trees. Julian generally works from home and has a  busy schedule. “I usually paint five or six days a week, generally in the afternoon. My studio gets the sun in the morning, so I can’t paint. When I’m finished, I photograph the painting before the light goes, make sure it looks OK in the photograph, then I put it up on the site, send out emails straight away and that’s it. Paintings take two weeks to dry, so from the minute they’re sold, people have to wait two weeks.

“The painting takes around three hours of the day, but there’s a lot of background stuff to do, and I get a lot of mail.”

“He never goes out, ever,” says Julian’s wife Ruth Phillips, a former cellist for the Glyndebourne Opera, who also works at home, treating people suffering from stage fright and tension. “Working at home is a privilege, but you can never get away from work somehow. It could be very difficult unless we go for a walk, and then we can sort of leave it.” Julian adds: “For years, Ruth was the breadwinner. But, now I can make a living and raise a family. It was not the case when we arrived here in 1998.”

It was then, after losing his job in a London cinema, that Julian bought a ticket for the South of France intending to paint for a living. Things got off to a promising start. In 1999, he was accepted into the BP Portrait Award (the annual portraiture competition held at the National Portrait Gallery in  London). “I was hardly making a living, but it gave me hope,” he recalls. But his career took an unexpected turn in 2004 when he discovered an  American artist who created small oils each day and sold them online. “I thought, wow, 365 days a year, $100, I could make a living! So I got it going two months later. The first two sold instantly, for the fixed price of $100. Within a few months, I was selling most days.”

His business truly took off in 2006, when he was featured in The New York Times. “We sold every painting in the house in about an hour. It was incredible! We could have filled the kitchen with money… I had 500 people wanting to buy every postcard. I kept the site going for two years selling at a fixed price, but in 2007, I decided to start the auction system.”

And the rest, as they say, is history. Julian occasionally organises painting workshops, Ruth is busy coaching musicians and they run a gîte near their house, ideally located near hiking paths in this touristy area. “It’s a lot of work, but we are happy with this,” says Julian. “We’ll probably still be here in ten years. I have nowhere else to go. And our son wouldn’t be happy if we dragged him away from his friends. Last year I got into the BP again. Of course, we travel, but it’s mostly working holidays. I can do the auctioning from anywhere. I just need a computer.” 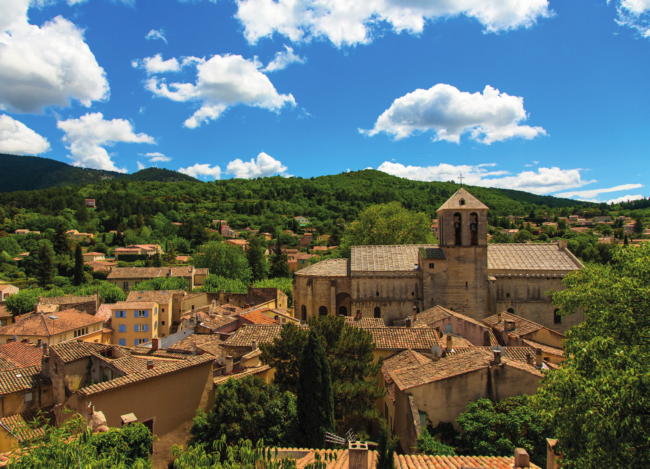 Less than 30 minutes away, near the town of Malaucène, there is also no pétanque and Pastis for Jude and Philip Reddaway, owners of La Madelène (bighouseinprovence.com), an old priory they bought ten years ago to realise their dream of living in Provence.

In this magnificent setting, surrounded by vineyards and orchards, they welcome guests from all over the world and offer numerous activities and events including wine and truffle tours, yoga and artists’ retreats, weddings, business conferences, and more. They’ve even hosted a film shoot. “We quickly realised that this is a big property and that we had to keep it busy all the time,” says Philip, who formerly worked in advertising in London. “I’ve always been interested in wine. My idea was to use this vast and secluded property to build a network of winemakers I like, people I like, wines I like and to introduce my guests to winemakers. So we started with the idea of only doing wine tours. But it turned out it was not enough and we had to offer different activities for other groups.”

In spring and summer, La Madelène, with its gardens, swimming pool, six bedrooms, old chapel and the monks’ refectory where guests eat their meals, is full. “That’s the busy season and it can be very intensive,” says Philip. “Sometimes, we are with the guests all day long, sometimes it is just chambre d’hôtes and we are just doing breakfast. Sometimes we run artists’ retreats for a week and the artist is the host. So it is less intensive in terms of client contact but, then, the table d’hôtes is very intensive and we are here in the kitchen all day long.

“When it is really busy, we get up at six as we have to go to the boulangerie to get breakfast, and do the wine tour. For an artists’ retreat, we have to do the catering for guests, which means going to bed at maybe midnight and then getting up at six. For the wine tours, we do it for eight people because of the capacity of the van. For bigger groups, I have to hire a second driver.”

Even in winter, there’s no respite – or very little anyway. For the past few years, the couple have been conducting winter truffle tours, complete with visits to Châteauneufdu-Pape.

Typically, the guests go truffle hunting with a farmer and his trusty dog and learn how to make a brouillade aux truffes. The tour ends with a truffle-laden meal in a nearby restaurant. “It has been very successful,” says Jude. “We like to do this because the work here is seasonal. So in winter, we don’t want to be bored. But it is not always easy. Now, we are concentrating on doing things that we enjoy.”

In fact, after ten years, Jude and Philip are ready to move back to London, and last year, they put La Madelène on the market. “We really enjoyed the experience and we have learned lots of things,” says Jude. “But our children and grandchildren are in England, so it’s time for us to go back to the UK. We want to move to something different.”

“We’d love to continue our relationships with the winemakers,” says Phil. “We would probably continue to run some wine tours remotely from London. I want to use the network of winemakers I’ve built up.”

For now though, there is the more pressing matter of selling their home. “It’s going to take a while because it is a big property and it’s not for everybody. So we might be here in one year. We have already taken reservations for September, because we need to keep the business running. But somebody will fall in love with it and buy it.”

Browse properties for sale in this area>>>