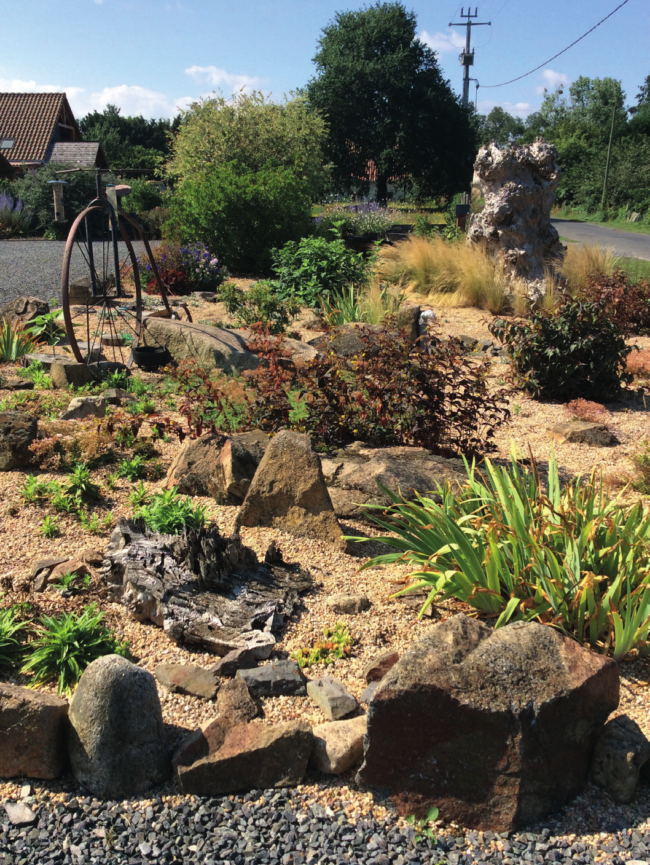 Jackie Barnes’s move to France, where she’s created a unique nature-defying garden in Vienne, had a stomach-churning start, she tells Marion Sauvebois

“We were house-hunting and we asked our agent to take us to a rustic restaurant… well, we got what we asked for,” recalls 63-year-old Jackie Barnes. “We walked into the tattiest of cafés that had the dirtiest of toilets.” An experience she and husband Alan are unlikely to forget anytime soon, she says with a chuckle. “I didn’t know about ‘holes in the floor’.

“We went through the door and there must have been about 200 people at trestle tables eating their lunch. We were introduced to the plat du jour,  something with funny little things bobbing around in a stew. It was amazing though. It’s there that we got hooked. We sold everything and moved lock, stock and barrel. That was it for us.” 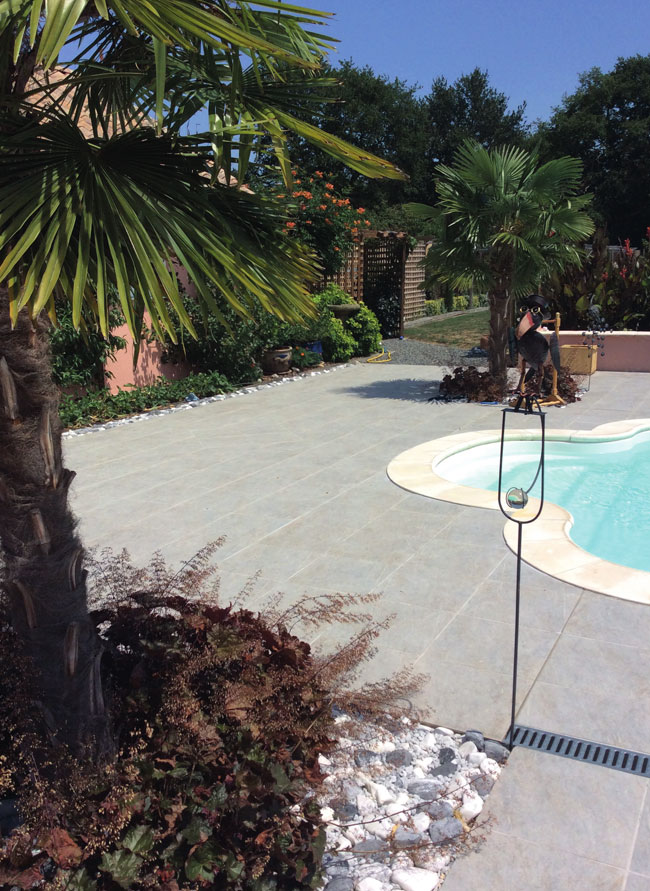 Armed with “appalling school French”, in her own words, and not so much as a Comment allez-vous? where Alan was concerned, the pair wasted no time in putting down roots in tranquil Moussac in the Vienne region. “I’m not an impulsive person,” the former district nurse from Essex hastens to add. “You have to do your research and really plan.” And plan, she certainly has.

The past 14 years are a blur of top-to-bottom renovations, building sites (they sold their first stone house on the banks of the Vienne to build their dream bungalow on a barren field just 300 metres away a decade ago), gutting, excavating, more digging – and last, but not least, landscaping. 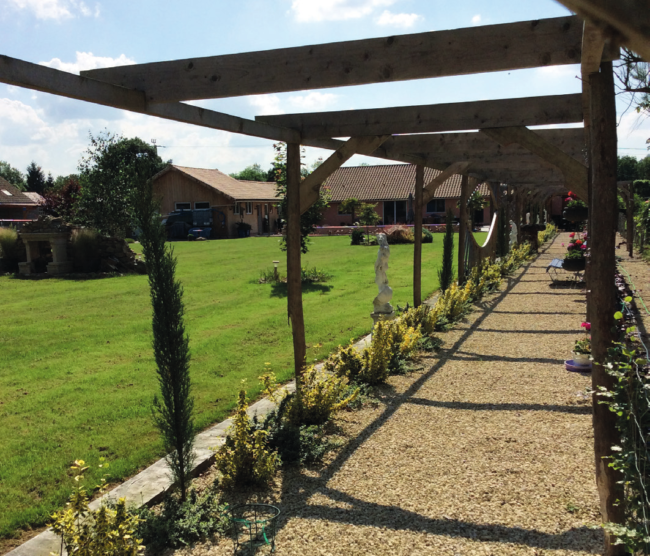 Beholding the couple’s neatly manicured lawns, clipped hedges, pristine borders and riot of blooms, it’s hard to believe that just a few years ago the  sweeping gardens were nothing but an overgrown grassland with bedrock concealed below.

“It was a steep learning curve,” she admits. “Because of the big extremes of temperature in the area, we had to play it by ear. We still do. And then there were the rocks. We knew the field would have been part of the river valley, so we expected some, but not quite so many mega ones.” 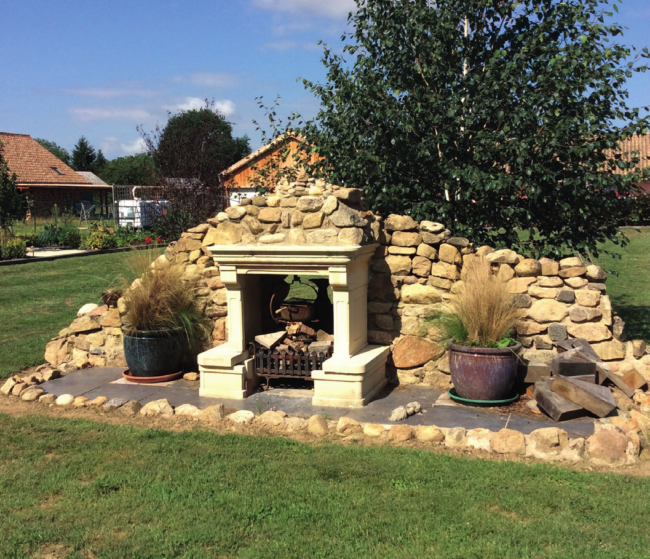 Ever resourceful, Jackie hoarded the stones, recycling them as handy border markers, to effectively map out her garden. Some have even found their way into its crowning glory, and Jackie’s pride and joy: her very own folly. Alan’s handiwork (“I keep getting new ideas and Alan executes them,” laughs Jackie), the open-air hearth, complete with a fully functioning fireplace, rises on the edge of the grounds like an ancient temple.

While it’s bucolic charm that enticed Jackie to these peaceful parts, there is nothing rustic or wild about her sprawling garden. Surprises await at every turn of the vast parkland: majestic palm trees grace the Mediterranean style terrace while an enchanting ‘living’ trellis leads on to a bountiful potager (modelled on the vegetable garden of a nearby château). Even the whimsical chicken coop is a converted Wendy house. “I love features,” says Jackie. 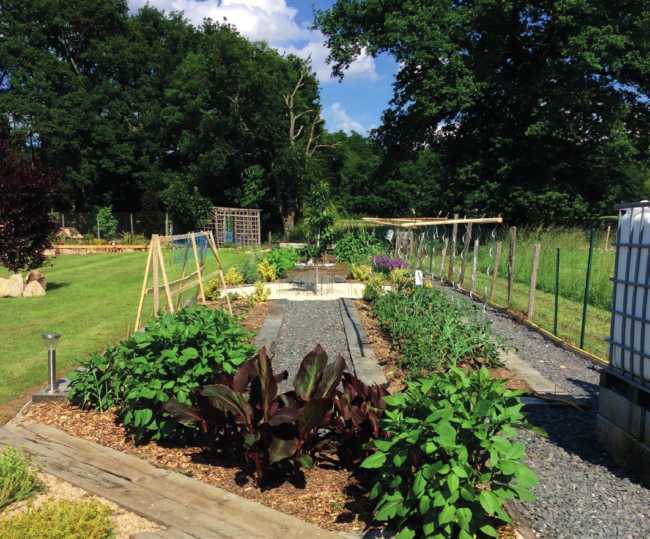 Nothing is left to chance and every inch of the garden is meticulously laid out, trimmed and planted. “The district nursing brings it out in you,” she  explains, before reeling off her ambitious landscaping plans. There is talk of ‘pleaching’ (training tree branches into fanciful shapes and twists, to you and me).

“I try to defy nature. That’s what it’s about. Pushing the limits of what I can do – especially the training of branches and plants.” Alan occasionally tries to rein in her enthusiasm, but the lure of the garden centre often proves too much to resist – even for him. 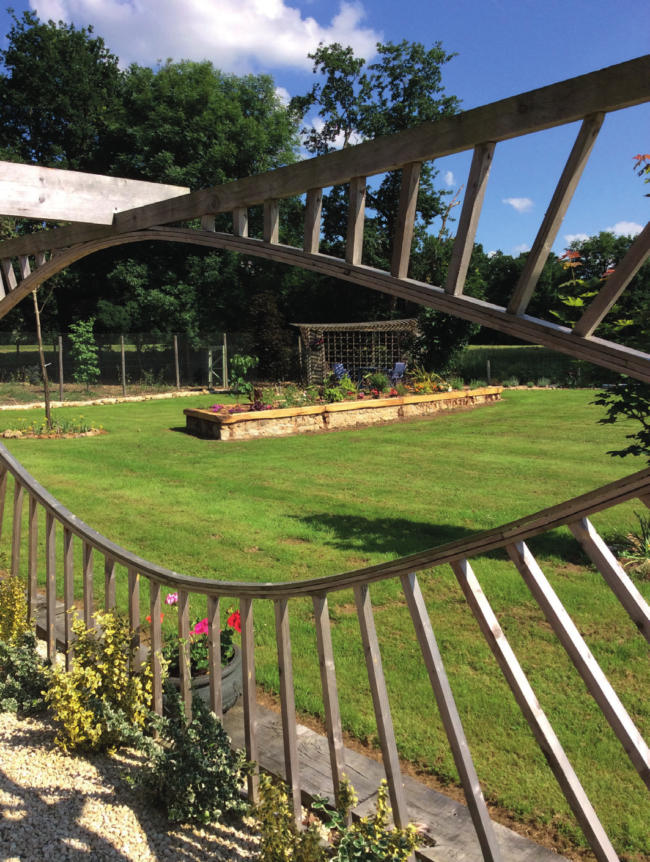 “He often says ‘enough is enough’ and then he takes me down to the garden centre and buys something new,” she says fondly, surveying the garden they have created together. “We just love it. If someone told me a few years ago, I’d be living here – living this life – I would have just laughed,” she continues, revealing in the same breath that she had initially set her sights on Spain, before steadily coming round to the prospect of retiring to the Hexagon.

“Neither of us ever thought this was where we would end up. But now we’ve done it, we really are living the dream. We wouldn’t have it any other way.”

Jackie’s garden in Vienne is part of the Jardins Ouverts scheme, which sees private gardens open to the public during the summer months. For more information, visit: www.opengardens.eu.