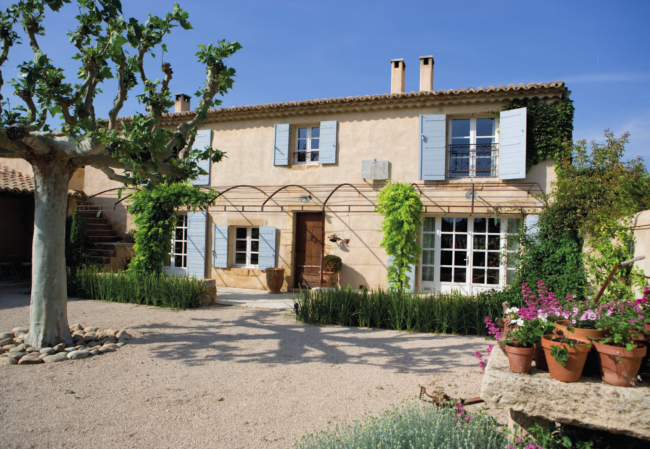 The Wilkinsons used their aesthetic talents and exquisite taste to return a dilapidated farmhouse in the south of France to its original splendour. Greg Cook finds out how…

Barely off the plane, Marianne and David Wilkinson took one look at the dilapidated stone shell of a traditional French mas in the heart of Provence and decided they wanted to call it home. Most people would have struggled to envisage anything new or welcoming coming out of this scrap of wasteland on the outskirts of Cheval Blanc in the Vaucluse, a few kilometres south of Avignon – but David and Marianne were unanimous in their conviction. 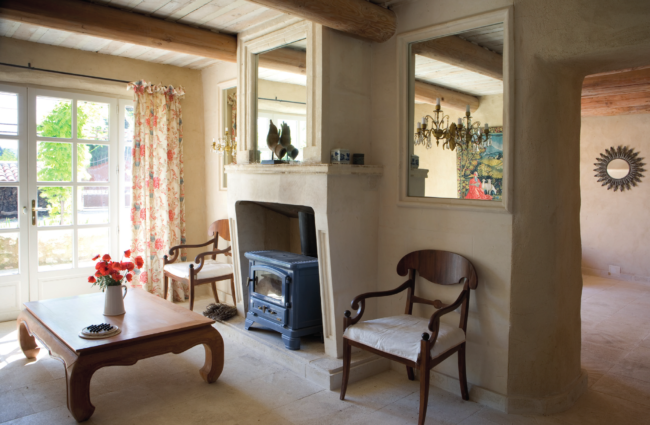 However, the Wilkinsons had a head start in making such a life-changing choice, with their abilities for spotting aesthetic potential – especially when it comes to property. It’s a skill that each has honed and developed through their individual careers: David as a professional photographer and Marianne as an interior decorator, running her own successful shop back in Cambridgeshire, where the couple used to live.

“We had a full life back in England, a lovely house and a wide circle of friends,” Marianne explains. “But there came a point when our outlook shifted. The kids had grown up and long since flown the nest and I remember quite clearly waking up one wet winter’s morning and thinking that I just didn’t want to get to a point in the future where we’d be waking up to another grey day of retirement.” 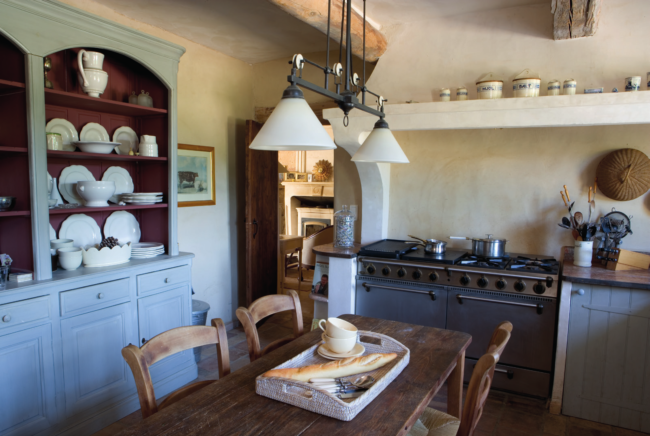 So the couple decided the time was ripe for a major life change and a move to sunnier climes. However, just as important to them was making a switch that would involve immersing themselves entirely in a foreign culture.

“We were certainly looking to do more than find another little piece of England recreated under year-round blue skies,” says David. “And we’ve always been keen Francophiles, partly because we respect the way the French are so protective of their cultural identity, so France was always the obvious choice.”

“We made sure we came out here during the winter months to do our searches,” Marianne continues.

“That was important because we wanted to see how places were at their lowest yearly ebb, in the worst weather. If you still love a place in those conditions, then you know that it’s going to be somewhere you’ll love all year round.” 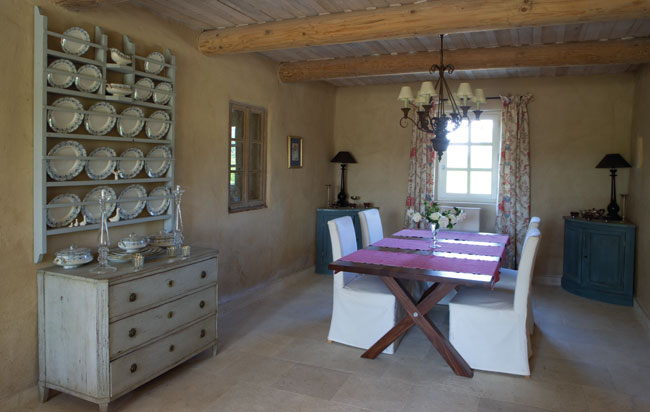 The Wilkinsons found Mas Pomona after a chance meeting led them to the edge of a modest village, sheltered from the Mistral winds by the protective shoulder of the Luberon mountains. Cheval Blanc is set near a charming tributary of the Rhône, and a scant few miles south of Avignon, the palatial home to a coterie of Popes in exile.

“To become part of that, we were prepared to put a little bit of extra effort into getting the actual property up to spec,” says David, understating a huge restoration project that would have had many renovation veterans running for the hills. “We were very lucky that we weren’t strangers to this kind of work, having completed several similar large projects back in the UK over the years. However, this was the first one we’d ever embarked on abroad and we certainly weren’t going to underestimate the difference that might make.” 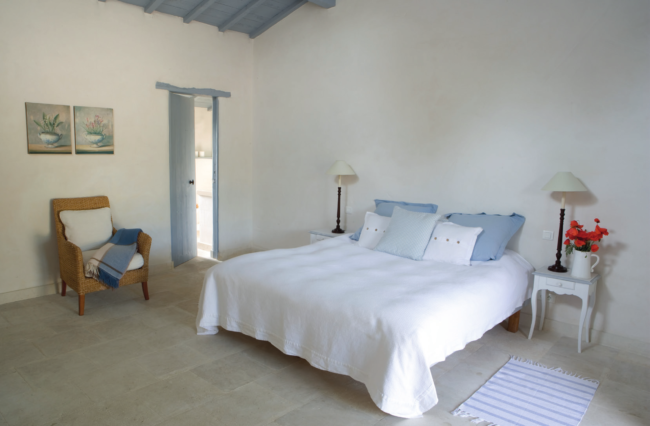 “The first thing to remember is to be patient when it comes to the purchasing process over here – especially if you’re buying an older property that’s been in a family for generations with random bits of documentation going back decades to deal with,” says Marianne.

“If you don’t, you’ll find yourself pulling out your hair before the builders have even arrived. Using a good notaire to oversee the transaction is essential.

“We didn’t complete until seven months after having our offer accepted.” Unfortunately, even then, work on the mas didn’t commence for another year and a half,” she adds.

“Which illustrates the importance of hiring a good project manager, known here as a maître d’o euvre,” says David. “Initially we were refused planning permission three times and it eventually transpired that we were getting turned down on all sorts of minor technicalities that would never have been an issue if they’d been explained properly. But we only found that out from our superb second maître d’oeuvre – once we’d finally sacked the first guy.” At  which point the couple were actually relieved to finally get started on the major renovation work. 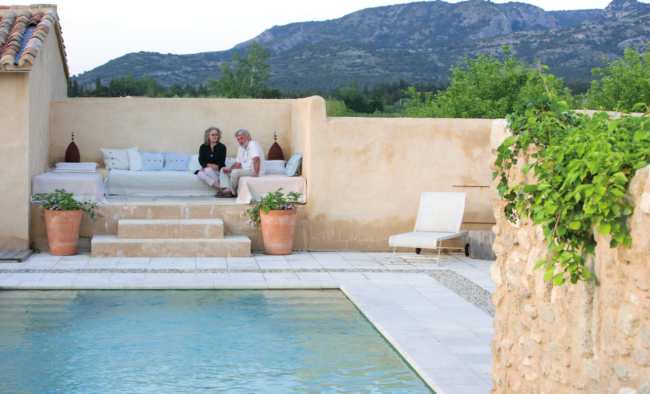 “There was certainly plenty to get going on,” chuckles David. “The roof had to come off and new floors had to go down just so we could get from A to B to work. We also had to incorporate a large ring-beam and other extra structural elements to make the building earthquake-proof to comply with the local habitation laws. The land immediately surrounding the house was waste ground that needed re-landscaping and, if that wasn’t enough, we were  also adding a single-storey, L-shaped guest wing onto one side of the main building.”

Fortunately, once underway, work on the property ran smoothly, thanks to a great team of local builders and craftsmen. “The old maxim that ‘it’s not what you know, but who you know’ definitely holds true when you’re undertaking building work abroad,” says Marianne.

“And in that respect, we were incredibly lucky. By July 2004 we were able to move in, although there were still a few final things to do, like sorting out the fixtures, fittings and décor – but that was the part I’d been looking forward to.” The property was completed over the next three months, with Marianne bringing all her interior design flair to bear on the house.

Simply finished in a palate of creamy neutrals and Gustavian blues, the decor now blends perfectly with the warm, honey coloured local stone. “There’s nothing quite like the satisfaction of restoring a beautiful building to its former glory, and being able to make your own mark in the process,” says Marianne. “But, of course, you only get that once the memory of all the hard work and drama has receded a little. I like to think that the house and garden now do justice to our beautiful surroundings – the poppy fields and apple and pear orchards.”

“There’s no question that the right location is everything when you’re making a move,” adds David. “But, for us, the most important part of that equation is the community you’re moving into – and I don’t think we could have improved on where we are right now.”

Located in the heart of Provence in south east France, Vaucluse is named after its famous spring. It’s a picturesque département of fortified towns and hilltop villages, lavender fields and vineyards. In the east, you’ll find cool shady riverbanks and lush orchards. Its capital is the historic city of Avignon, which has its own airport with links to Birmingham and Southampton. Vaucluse enjoys some of the best weather in France.

Browse property for sale in this area>>>