Renovation in the Loire Valley – Shelter from the Norm 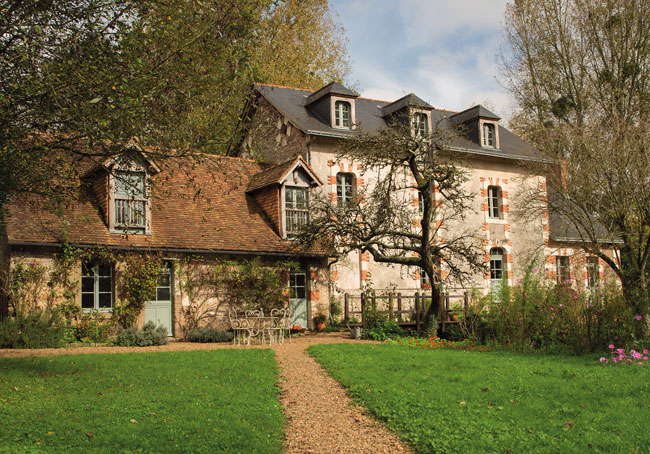 Dismayed by modern architecture, artist Jonathan Robinson tells Greg Cook how he fled to the sanctuary of a dilapidated 18th-century watermill deep within a forested enclave in the Loire Valley

Should Jonathan Robinson ever find Prince Charles on the broad, stone doorstep of his serene and superbly restored watermill on the untrammelled south western edge of the Loire Valley, chances are they’d get on very well. In fact, their views on contemporary architecture are in concert to such an  extent that the conversation might turn almost immediately to which glass eyesores they would like to dismantle first.

It’s actually quite probable that Jonathan, a highly accomplished fine artist who studied painting at the University of California, Berkeley, is even more vehement in his rejection of the modernist ideologies perpetuated by architects such as Frank Gehry than HRH himself.

Jonathan describes himself with earnest conviction as “an aesthetic refugee”, a man who didn’t just quit the city but fled from the very concept of the metropolis when he realised that even his beloved Paris was being trampled beneath the incessant march of concrete and steel. 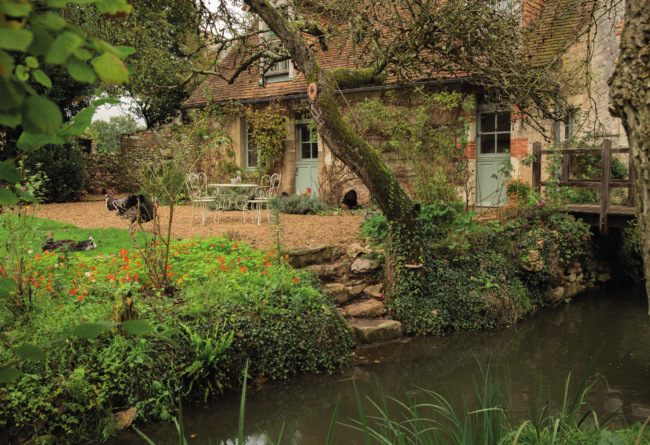 It is no surprise, then, that when Jonathan decided to make a break for it he not only retreated deep into regional France, but far into the sanctuary of a densely forested national park, one bisected by one of Europe’s last great wild rivers, the Loire. Within this landscape, apparently untroubled by visits from the last couple of centuries, it feels as if Jonathan has not merely escaped the rat race but fled back in time.

The adjoining village harbours little more than a hundred residents, tucked up in old stone buildings set around a small square adjacent to a 12th-century church. The outlying castle dates from the 15th century and here, in what could easily be a rural vignette from a novel by Zola, Jonathan’s  18th-century watermill is actually one of the area’s more contemporary structures.

When Jonathan first arrived, back in 1991, this small pocket of life seemed trapped in amber, the only signifier of time moving forwards a gentle decline into disrepair. The three-storey watermill, which had once ground all the flour for the town’s bread, had long ceased to fulfil its intended purpose. The detached mill wheel sat somewhere downstream of the building in the middle of the little river that the mill itself straddles, and the whole 20-acre plot was home to one elderly gentleman and his small herd of goats, who roamed freely around the property – both inside and out.

Though it was in a serious state of dilapidation, the honest condition of the building and its situation in a location perfectly attuned to his sensibilities led Jonathan to make an offer on the property almost as soon as he set eyes on it. On one level, this may all sound terribly romantic, but what Jonathan faced in reality was damp-blackened walls, a collapsing roof, and rooms piled high with rotting barrels and mouldering grain sacks.

“Nevertheless, I realised that I’d found a space that could become both my home and my art studio,” says Jonathan. “And although the condition was daunting, I relished the opportunity to breathe life back into this property, most importantly without violating its essence by mutating it into some terrible ‘rustic-chic’ conversion boasting ‘all mod-cons’.” 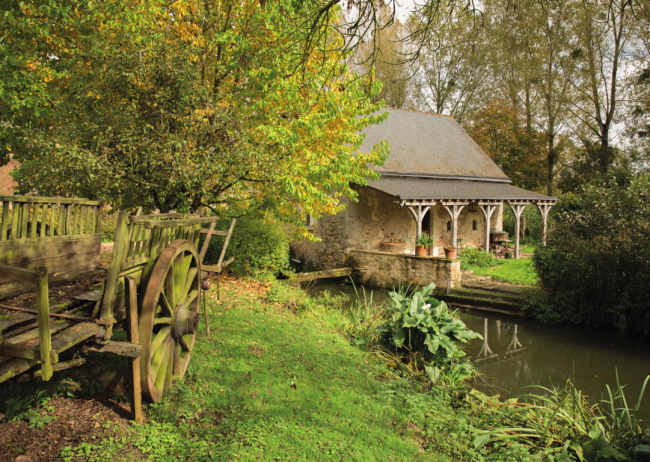 Jonathan bought the mill, along with a small, adjacent building of about 860 square foot, for around £65,000, and set to work turning both structures into a 2,422-squarefoot studio home entirely designed to respect the building’s roots. His ethos was simply to live within the building and adapt his way of life to its spaces, rather than lay his own immediate requirements upon the space with a heavy-handed conversion. 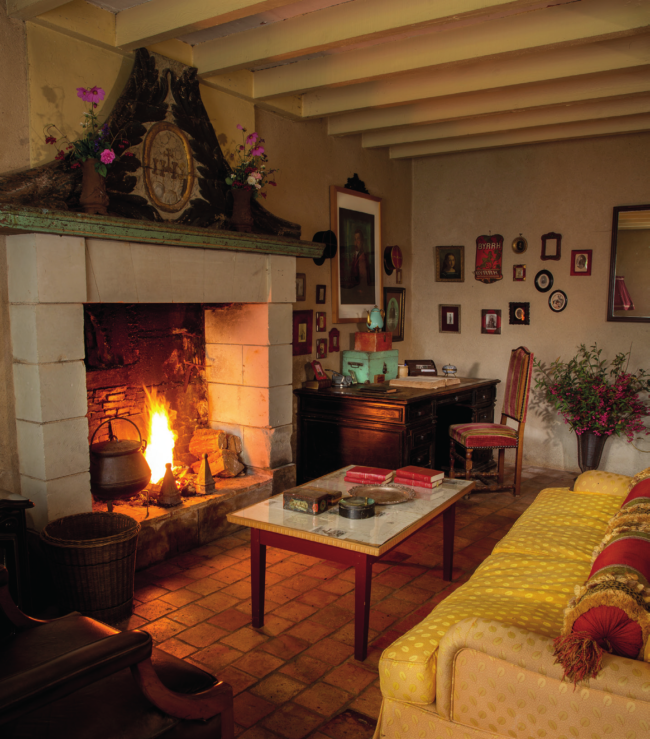 So began a restoration that spanned two decades, as Jonathan meticulously replaced like-for-like fixtures and fittings throughout the structure, either waiting patiently until he found suitable period replacements in antique and junk shops, or saving money gradually to afford the work of traditionally  skilled local craftsmen. 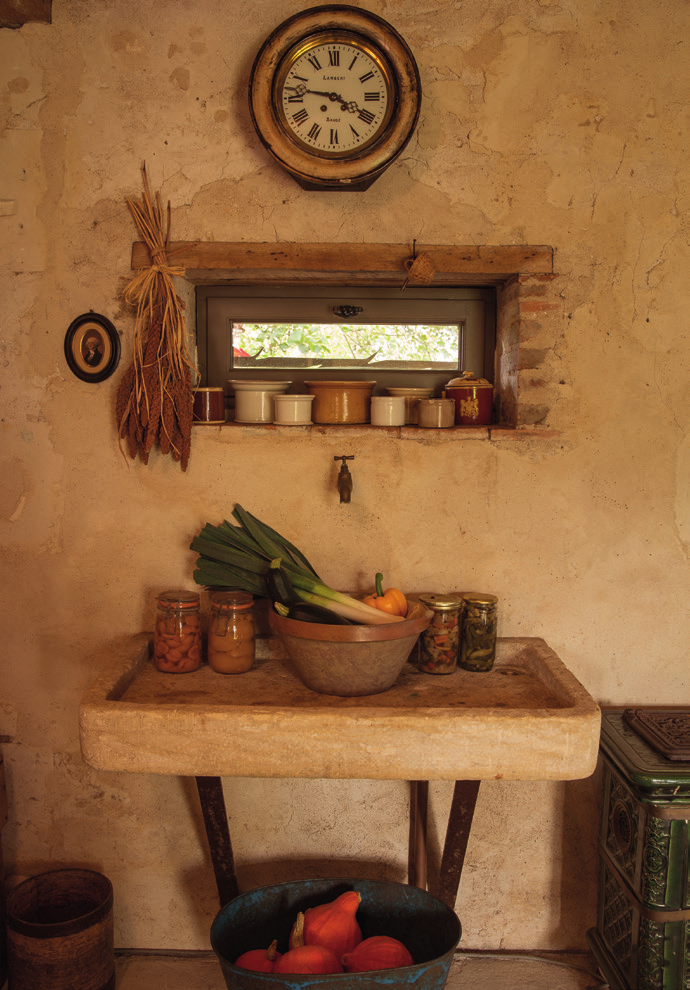 “My only goal was to remain entirely authentic and honest to the building, but to do that you sometimes need a lot of patience,” he explains. “Everything I have used to furnish and decorate this property is a period piece that I have discovered and been attracted to because of its beauty and to find correct like-for-like replacements, I have contracted local artisans to make new fixtures and fittings in the original style, using traditional methods.” 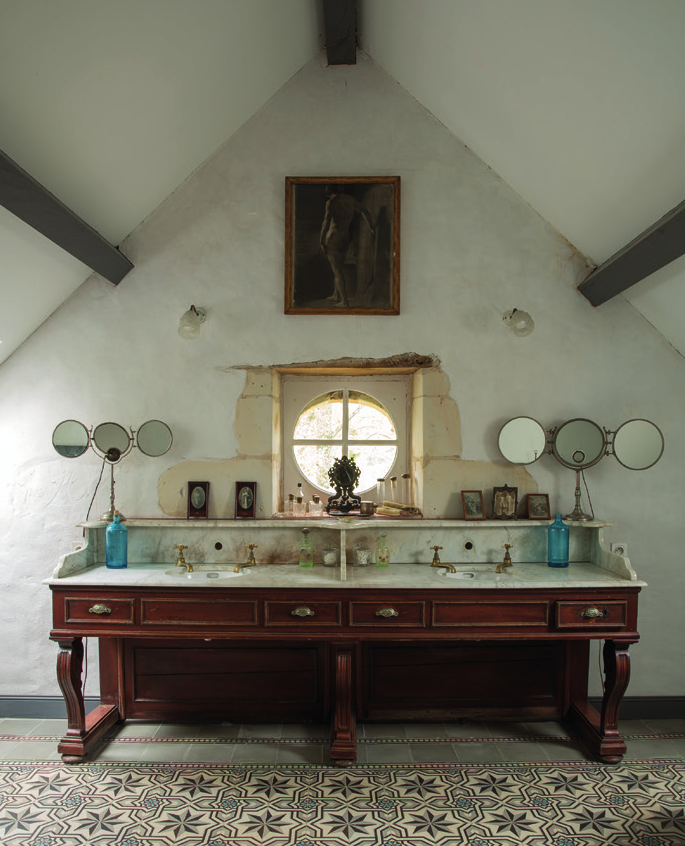 In his quest not to disturb the integrity of the original building, Jonathan even went as far as constructing a glass extension to house a new kitchen, one essential facility the property had never possessed. 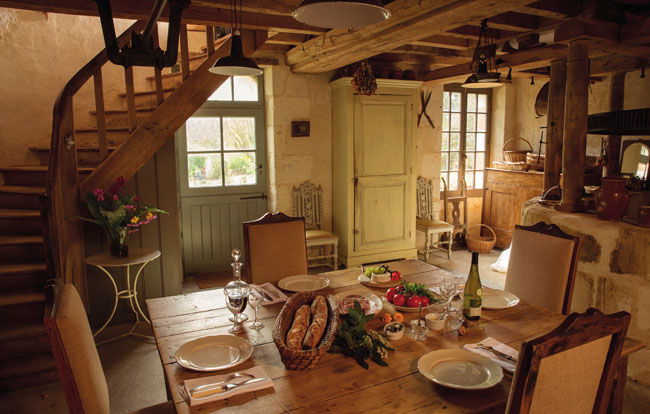 Within the building proper, the simple elegance of the restored space now serving as the dining room puts the original mill workings centre stage, the giant iron pitwheel, stone nut and ‘wallower’ wheel rising impressively from behind a protective dwarfwall of golden limestone. Atop the restored oak staircase the theme continues, although the balance here is between original machinery and furnishings of a little more opulence. Jonathan’s aesthetic may be rustic and authentic, but there’s certainly nothing Spartan about it. 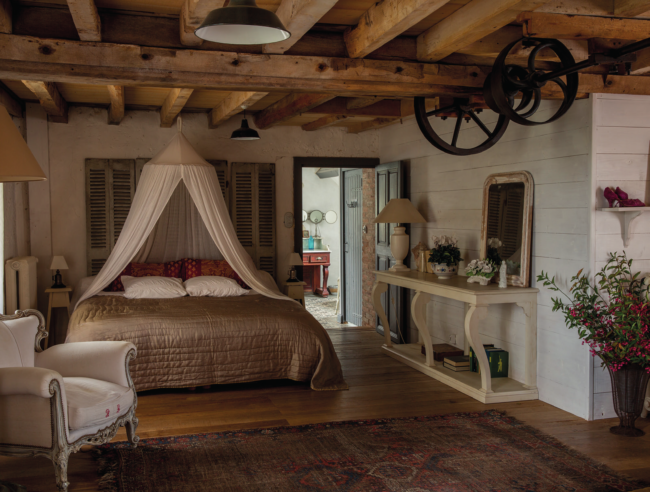 Today, in a space still filled with only the sound of birdsong and babbling water, this beautiful building stands preserved, both for posterity and as a testament to one man’s single-minded dedication.

“This was just a simple industrial building, but the blacksmith who made every door handle obviously took pride in embellishing them by adding certain decorative elements,” Jonathan concludes.

“Whether it was the stone worker or the woodworker, they all added little eye pleasures. It felt artistic to them. It was driven by pride at being accomplished enough at their craft to participate in a culture of beauty.” 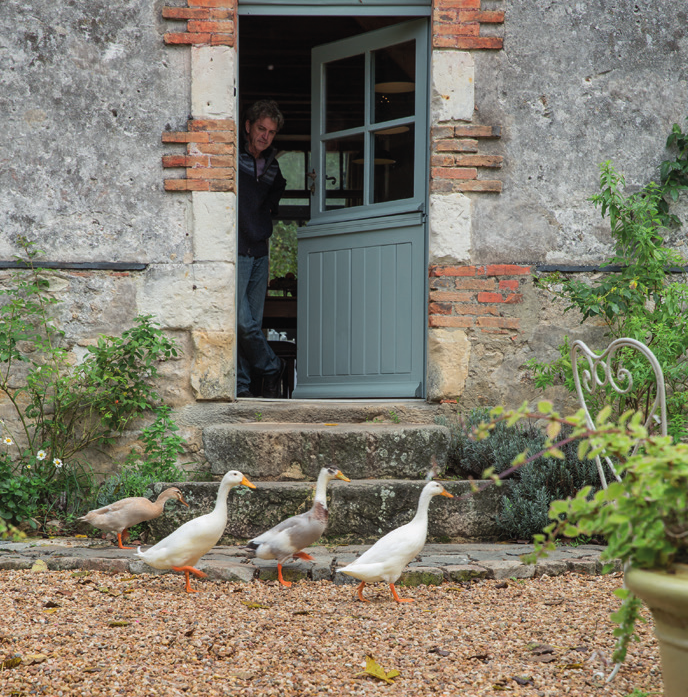 It’s a thought worth taking back to the world of glass and steel, and a tradition Jonathan is determined to continue in this idyllic enclave of rural France, one that remains safely protected from the ravages of the 21st century.

LINIÈRESBOUTON
Linières-Bouton is a former commune in the Maine-et-Loire department that was merged into the new commune of Noyant-Villages in December 2016. This is unspoilt France, where time passes slowly and nature still rules, not least at the Moulin Brégeon, which has been restored in a way sympathetic with its history. https://www.moulinbregeon.com/

Previous Article The Old and the New
Next Article Grape Expectations: France’s most famous grapes and where to find them